A gem of a jeweller

Up and coming jeweller, Alexandra Bletsas, talks to PENNI PAPPAS ahead of her upcoming show at Craft Victoria. 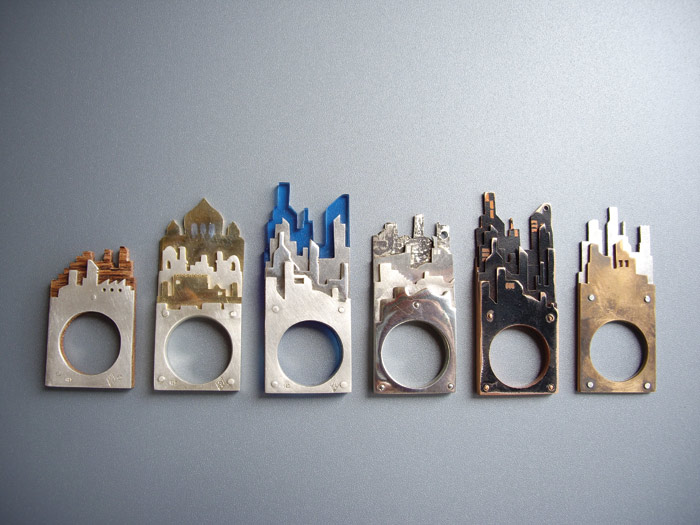 Alexandra Bletsas has always enjoyed making jewellery but it took a university course to help her embark on a career as a jeweller.

From the age of fourteen, Bletsas has been tinkering away making jewellery.

Initially she opted to do a degree in conservation ecology, a world away from the world of craft design she is  now immersed in.

However Bletsas could not resist the urge to keep making jewellery and soon realised that she got more joy out of creating wearable designs, so she decided to pack conservation ecology and become a full-time jeweller.

Bletsas took a path that saw her study jewellery engineering at the Northern Melbourne Institute of TAFE (NMIT) and sell her pieces around Melbourne.

“I was always making jewellery on the side. I was making beaded jewellery and did that for a few years and decided to do a short course in silversmithing and loved it. Then I decided to apply for NMIT and got in to the jewellery engineering course. I can’t think of anything I’d rather do; I love it.”

Bletsas graduated last year from NMIT and has set herself up in a studio space with three of her fellow graduates in Brunswick.

As a recent graduate Bletsas is the first to admit that she is still finding her way but revels in the challenge of creating a new piece.

“I’m still experimenting,” she said when asked to define her style. “I don’t feel like I’ve got to a place where I can say this is what I do or I’ve figured out what I am going to make. I’m only a year out of school so I am still playing with things. At the moment I am inspired a lot by architecture, pop art, design in general and colour and working with paints.”

Blestsas points to her father as a particular inspirations.

“My dad’s a signwriter”, she explained, “so I’ve always been surrounding by colour and designs. I was influenced by it. The paint, the colour… it’s all a part of me.”
The frustrations of the creative process are not unfamiliar to the young jeweller.

“Sometimes you get stuck for ideas and you think what am I going to do next,” she said, “and then other times you have all these ideas and it can be so overwhelming. Inspiration comes from everywhere and it’s hard to pinpoint where you initially get inspired.”

Bletsas’s creation of a series of cityscape rings has seen her acknowledged as an up-and-coming talent in the craft design world.

The rings “were quite challenging to make,” Bletsas said, because “they were six different cityscapes.”

As the rings were part of an exhibition, Blestas felt free to push the boundaries and to make wearability a secondary consideration.

The young jeweller was happy with the response to her experimentation and she proudly concedes that they are her favourites.

“People responded to this piece really well. It was great to get recognition and feedback on my creations and to see my idea out there.”

However being a jeweller can be all-consuming, according to Bletsas.

“Trying to balance work with being in the studio is a hard part of being a jeweller,” she said. “It’s hard to switch off. Sometimes I am in the shower thinking ‘what am I going to make next?’ which is okay as long as I don’t dwell on it too much.”

However Blestas is clear that the all-consuming nature of her chosen profession has its rewards.

“Seeing the end product is the most rewarding part. Particularly when it is something that’s been in your head for months and you’ve been working on it for months. There are so many steps to working towards the end result so it’s always great to get to the end. And seeing people really like it and respond to it is great.’

‘Sneak,’ an exhibition of Alexandra Blestas’s work, will take place from 16 – 29 November at Craft Victoria, Flinders Lane. Her jewellery is available for sale at Arbor Redox, Shop 12, Spartaplace, 459 Sydney Road, Brunswick. Check out her blog at alexandrabletsas.blogspot.com for all the latest news and designs.