Mr Atkinson honoured to be called “Trantellena” (thirty times Greek) and expressed his gratitude to the Pontian Federation and to Martin Hamilton-Smith for giving him the opportunity to stand up for truth and justice. 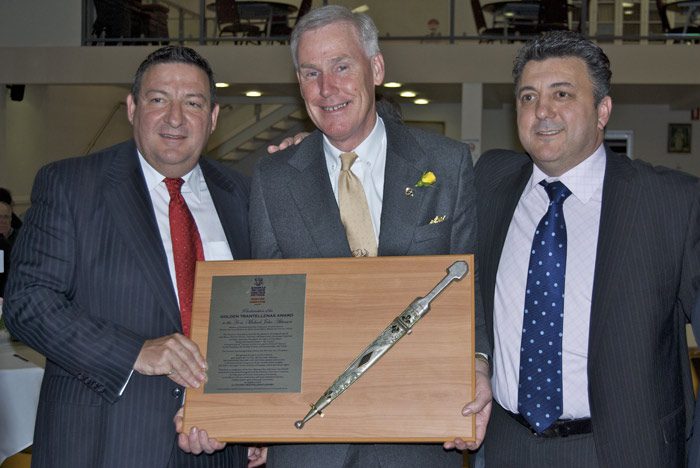 The Golden Trantellena Award is reserved for those who have a proven track record of their dedication to the ideals of Hellenism and its the highest award the Federation can bestow.

The ceremony took place at the annual dance of the Pontian Brotherhood of South Australia.

Mr Atkinson, a well-known philellene, was instrumental in having the Pontian genocide recognised by the South Australian parliament in April.

Accepting the award Mr Atkinson said how honoured he felt to be called “Trantellena” (thirty times Greek) and expressed his gratitude to the Pontian Federation for giving him the opportunity to stand up for truth and justice.

Last year Mr Atkinson had come under attack when he unveiled a plaque at the Immigration Museum in memory of the Pontians massacred in the 1910s.

“It’s easy to argue about the maltreatment of not only the Pontian Greeks, but also the Assyrians and the Armenians, because it’s true. Thank you for giving me the opportunity to make this argument” Mr Atkinson said while emphasising the importance of discussing these issues in public fora.

Mr Atkinson acknowledged the support of the former leader of the opposition Mr Martin Hamilton-Smith in passing the resolution recognising the genocide of the Christian populations unanimously.

The Federation of Pontian Associations also held its annual general meeting in Adelaide on Sunday which saw the transfer of the Presidency of the Federation to the ACT.

Incoming National President of the Federation, is Mr John Efkarpidis. The Efkarpidis family is well-known in Canberra for its chain of supermarkets and for its involvement in property development in the ACT.

The decision for the National  Presidency to go to the ACT is in line with the wishes of Harry Tavlarides, who believes that moving the Federation’s to Canberra will enable the Federation to continue the lobbying for the passing of a resolution recognising the Pontian Genocide by the Federal Parliament.