Nick Tsiavos speaks to JOHN-PAUL HUSSEY in advance of his performance tonight at La Mama in Carlton. 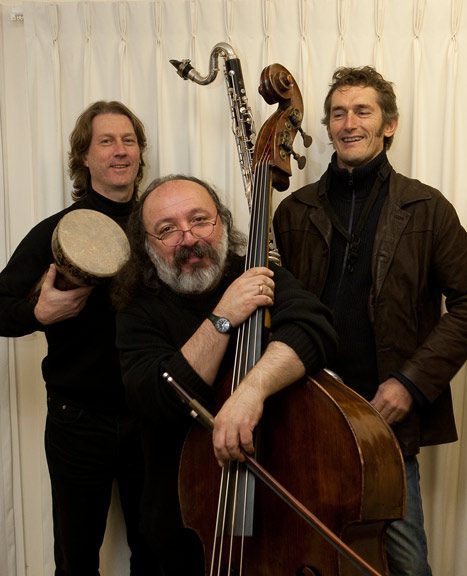 Nick Tsiavos, a highly celebrated artist of Melbourne’s music scene, has an ancient grandeur to him.

One can’t help thinking he is a resonating vestibule of cultural archaeology.

One minute he has the air of looking like Conan the Barbarian’s personal sword maker.

The next, a medieval priest who cradles that whale of an instrument – the double bass, as if he were doing a slow and smoky samba with the ghost of some long dead saint.

Tonight, at La Mama Theatre, Tsiavos has teamed up with two other masters of musical coda, Tony Hicks and Peter Neville to reinvigorate a work Tsiavos wrote back in 1994.

Tsiavos’s work can be described as ‘sacred’ or ‘spiritual’. I asked what he feels those words mean in this deeply secularised world we now live in.

“Well, yes it is music for the ‘sacred’, whether it be for eastern religions or the Byzantine or for that matter the chants of the old Roman Catholic Church. But my relationship with them is as a cultural extension.

Would you call these traditions primary texts?

“Yes, I shed light on them here in the present and they shed light on my works, as equally. It’s what Bakhtin refers to as a dialogue between many texts, mutually offering insights to and for each other.”

What is it about the ‘chant’ that appeals to you so much?

“Chant is often associated with the calming of the mind, says Tsiavos, “that Gregorian idea to get you into that still place for spiritual meditation. But then there’s the female mystics, Hildegard of Bingen or Kassia from the Byzantine tradition of the 9th Century, who go more for that sense of rapture.”

Would you say you are very much influenced by the feminine signature of spirituality?

“I enjoy the abstraction of it, like a well of water generates resonances.”

The work Tsiavos is returning to though, is coming from very contemporary situations.

One of the pieces is of enjoying a picnic in Altona and observing across the way the heavy industry that surrounds that particular seaside suburb.

“We were having this idyllic experience in a park and yet you could see and smell the odours of these petroleum stations rolling across the landscape. I was interested in creating a piece dealing with those contradictions.”

A lot of Tsiavos work does seem to be an elemental meditation on the contradictory nature of beauty in our modern industrial world. One of his albums title, for example, is a quote from Marx, ‘All that is solid melts into air’.

Although there are some very specific intellectual and poetic intentions behind each work, I asked if he expected his audience to receive those specific messages.

“I’m hoping for my audience to imagine what they can. My music is more a platform for their senses to erupt as such.”

How do you feel about how we now produce and disseminate music today, particularly in the advent of iTunes and Limewire?

What do you think is different about this presentation of an old work?

“Firstly it’s not just me now, it is a collaboration between two very fine artists and what they can offer. Also, like I reinterpret or add to those ancient musical texts, I am now adding a fresh perception on the issues within that music.”

Since we do habitually and feverishly consume ‘new’ products daily, we tend to forget that returning to past work is indeed an opportunity, not a right.

This presentation is also providing the human ears, and body, with a quality that was once the exclusive privilege of old royalty and European cathedrals.

So, whether it’s for spiritual health or a need to imbibe the sonically authentic.

This ticket will most certainly call your ‘personal whale’ closer to the shore.