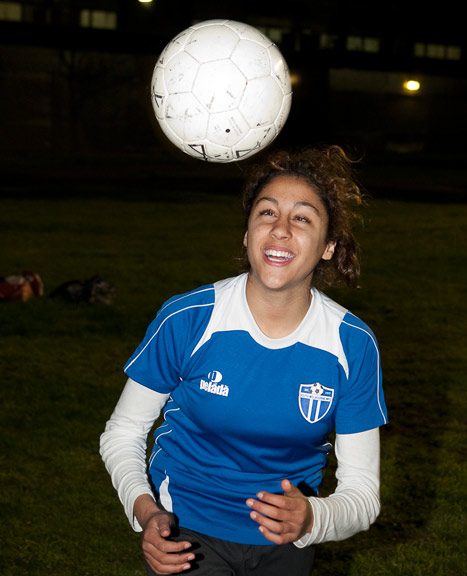 At the age of 14 most teenage girls would be as far away from excelling in their dream career as their fathers accepting a boyfriend on the scene. But for Tiffany Eliadis the picture couldn’t be easier to imagine. Tiffany is lucky enough to be doing what she loves, playing soccer, and is doing so at a level unthinkable for most female soccer players, let alone a 14-year-old girl.

“When I first started playing (with the senior team) I was a little nervous, but I slowly started getting more confident each week …I have quickly learned that thinking ahead of the play really helps me at this level.”

Eliades is currently enjoying her first season playing with South Melbourne’s WFC senior team. While most girls would be playing soccer against players their own age, Eliadis is sharing the soccer pitch with full grown women and loves the challenge.

“The pace of the game is played at such a fast intensity compared to what I am used to,” says Eliadis. “You have to be able to go into tackles hard, win the ball and pass it to feet or you’re not going to survive.”

Most wouldn’t blame Eliadis for finding the prospect of playing with women a daunting and intimidating one. However her feelings are quite the opposite, with Eliadis never being the type to shy away from the physical and mental challenges which sports presents.

At only eight years old Tiffany recalls asking her parents to play Aussie rules football. If it wasn’t for her mothers refusal for the fear of her daughters safety, Eliadis had plans to carry on her fathers legacy.

“I started playing sport because my dad was a sportsman. He used to play football and I initially wanted to follow in his footsteps,” she said.

While respecting her mothers wishes not to play football, Tiffany still felt the burning desire inside to make sport a part of her life. Soon after she lead her parents down the road to Endeavour United FC and as they say the rest is history. This gifted young soccer player has not looked back since.

With her first season with South Melbourne coming to an end, Eliadis has already adapted to the physicality and intensity of senior football, and is quickly growing and improving her game .

“When I first started playing (with the senior team) I was a little nervous, but I slowly started getting more confident each week,” said Eliadis. “ I have quickly learned that thinking ahead of the play really helps me at this level.”

Creating history by being the youngest ever female player to pull on a jersey for the South Melbourne senior womens team, Eliadis break out season also saw her selected for the U15 state team at the National Championships in Coffs Harbour.

The team finished the successful campaign with three wins and one loss, with the young gun scoring in the team’s 3-0 victory over Tasmania.

“Playing for the state team was another great experience for me,” said Eliadis. “Michael McBride was our coach for the championships and I liked his style of football. I was given the opportunity to play right wing and striker which are the positions I am most comfortable and was lucky enough to score which was great.”
Tiffany wishes to continue pursuing her passion for soccer and is chasing the dream of one day playing for Melbourne Victory Women’s and for Australia with the Young Matildas.

For now Eliadis remains at South Melbourne FC while attending school at Rowville Sports Academy which gives young athletes the opportunity to further develop their sporting talents whilst at school. Eliadis is an example that through hard work, perseverance and compromise, people can pursue their dreams at which ever age they are, and that good things really do come in small packages.