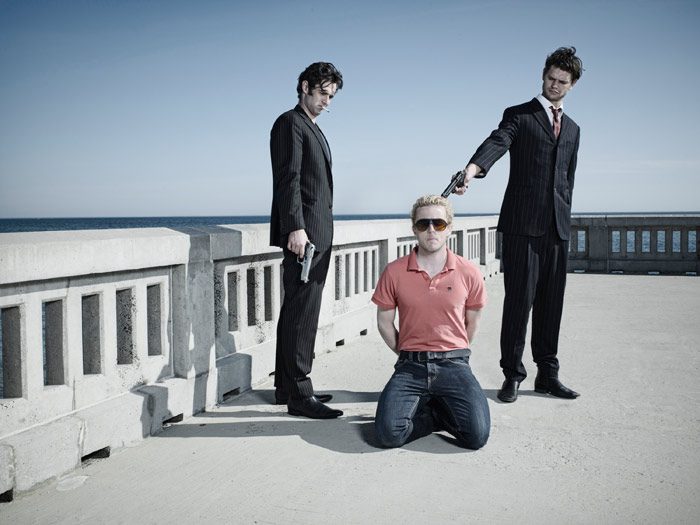 There is good reason why butchers are omitted from jury duty, simply because as a profession they are just far too desensitised to the more grizzly aspects of crime.

I think what’s really beautiful about this show is that it places these incredibly epic notions within a framework of brother against brother, which could just be seen as metaphor for growing up and to fight for a place in their world.

There’s also a strong argument our shoot-em-up video game generation are as equally detached and that recent crimes of ‘unimaginable horror’ can be indirectly attributed to this modern cultural phenomenon.

But we do love a good dose of violence don’t we?
Well some of us do.

Some even go as far as to admit that a nicely choreographed piece of blood and guts can be better than sex.

That is to liberate us from over suburbanised and fractious minds, the same way a big chunk of chocolate can be a temporary cure for a bleeding and broken heart.

“We are human after all,” is the Captain Kirk line, his default explanation for whatever ‘negative’ stuff might have gone down in Star Trek.

Now, regardless of that bright, tight top TV show being a justification for American imperialism, the main philosophical vibe is there’s not much we can do to change those atavistic urges we have, such as killing, maiming and generally taking over the universe.

Theatre director and dubbed Wunderkind Simon Stone has got a fresh batch of violence slowly simmering in his rehearsal space, and it’ll be ready for sampling at The Malthouse Theatre in Melbourne this coming week.

According to the menu this dish a la revenge is an adaptation of Roman Playwright Senaca’s ‘Thyestes’ and “is best served cold.”

Stone explained why he was compelled to take up the story of Thyestes, “because it’s about ‘first blood’. Once the first crime has been committed there is no turning back”.

Thyestes is described by Stone and his creative team, “as the most barbarous and bloody of any Greek legend. It is the tale of the deposed king whose sons were slaughtered and served as a feast to their own unwitting father.”

And it’s also quoted that in this particular adaptation of Thyestes there will be, “no exploration, no moral dilemma, no surprising plot twists or salvation.”

But instead what the audience will experience on the night will be, “a cursed and endless cycle of violence, with little faith that gods invoked by Thyestes will right this terrible wrong.”

One wonders then what Stone and his team will be fundamentally drawing out of the original Thyestes story.

“In very basic terms, it’s how cultures of violence are born and it exists both in its content as a wonderful evocation of that idea,” said Stone, “but also in its place in the larger mythology.”

And with mythology as a reference point there’s the contemporary perspective these tales of ancient Hellenic royalty, although appearing all too human, their machinations are in fact metaphors of much more fundamental issues.

“That idea has been picked up by Freud, Jung and Joseph Campbell” said Stone “…these myths, while originally created as tales to tell over the campfire, they do bear great relevance to actual psychological states of mind and very base biological instincts.”

This is rendered extremely well in the French period movie, ‘Queen Margot’ where two opposing religious sensibilities clash like molecular structures randomly bombarding each other as an expression of life’s primal forces.

“Yes, absolutely,” agreed Stone “I think what’s really beautiful about this show is that it places these incredibly epic notions within a framework of brother against brother, which could just be seen as metaphor for growing up and to fight for a place in their world.

“That is the advantage of these kinds of works, particularly with Shakespeare,” Stone added, “it takes it right down to its metamimical meaning and although there isn’t a great emphasis on plot detail, this show is not really an exploration, but more revelational.”

The default question is what relevancy does this all have for local audiences?

Considering what’s been happening in Canberra with those faceless men and the recently deposed PM, Stone might be lucky with his timing.

All he may have to do is turn up the volume for an audience already pre-prepared for this back stabbing and head chopping occasion.

Let’s just hope, generously speaking, that what he dishes out is not as bland as what has emerged from that night in Canberra.

September 16 – October 3 at the Malthouse Theatre.

For more information and bookings, go to http://www.malthousetheatre.com.au/