Elena Xanthoudakis – Soprano on the rise 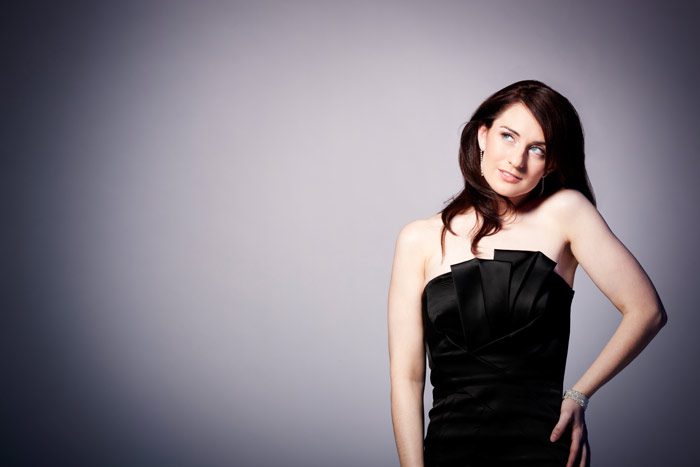 Elena Xanthoudakis is building a career in the world’s opera houses.

Elena Xanthoudakis spends half her time here in Australia and the other half overseas.

I am next singing the role of Jemmy in Guillaume Tell (William Tell) in October for the Academia di Santa Cecilia in Rome conducted by Antonio Pappano – Chief Conductor at the Royal Opera House, Covent Garden in London.

And at the age of only 30, having managed to cover so much ground professionally, she has won so many accolades and awards you’d need whole afternoon to write them all down.

For example in 2008 Elena was a major prizewinner in Placido Domingo’s prestigious international opera contest ‘Operalia’.

Although a highly celebrated opera soprano from Melbourne, there just isn’t enough work here in the Australian opera houses.

If Xanthoudakis lived in Germany or Austria it would be an entirely different matter, where not only is Opera appreciated by a much wider audience it is also properly funded.

‘Properly’ with a kingsize, capital ‘P’.

From memory, there is some mind boggling statistic that came out of Barry Kosky’s mouth that one art institution in Germany has more funding in one year than all of the arts funding in Australia put together.

I spoke to Xanthoudakis the other day on the phone – sadly, she has the kind of good looks that would make large governments fall.

“I am next singing the role of Jemmy in Guillaume Tell (William Tell) in October for the Academia di Santa Cecilia in Rome conducted by Antonio Pappano – Chief Conductor at the Royal Opera House, Covent Garden in London.”

After that Xanthoudakis will be returning to Australia to perform in a production of Hayden’s ‘L’anima del Filosofo’ ossia ‘Orfeo ed Euridice’ for Pinchgut Opera in Sydney in early December and Handel’s ‘Messiah’ with the Melbourne Symphony Orchestra the week before Christmas.

“Then it’s to the Metropolitan Opera in New York from February to April,” said Xanthoudakis.

“I will also be making my Wigmore Hall debut and then returning to the Royal Albert Hall for the BBC London Promenade concert.”

Well, with all of that going on, she may well end up with more flyby points than Mozart has notes in his concertos.