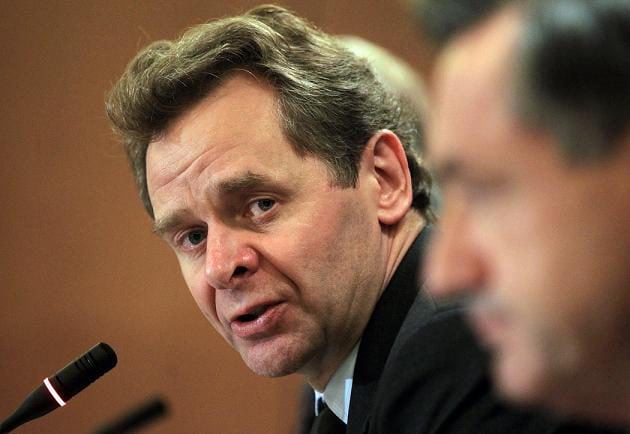 Poul Thomsen, representative of the IMF, addresses to journalists during a joint, with representatives of EU and ECB, press conference in Athens on 23 November 2010. The eagerly expected press conference by the troika officials offered insight on howl Athens is meeting obligations under an EU-ECB-IMF memorandum signed in May to commence a 110-billion-euro bailout for the debt- and deficit-plagued east Mediterranean country. Photo: AAP via EPA/ORESTIS PANAGIOTOU

Greece is broadly on track with reforms needed to continue tapping a euro110 billion bailout package, but still faces challenges and must make an extra effort to meet deficit reduction targets, the IMF, ECB and EU executive said Tuesday.

Representatives of the three bodies, dubbed the “troika”, said that while they were confident Greece would be able to return to international markets before the end of the three-year bailout, as it has said it aims to, several options were available to help the country if it found itself in difficulty.

Greece began receiving the three-year bailout loans from the IMF and other European Union countries that use the euro in May.

The loans, which run to 2013, were its only hope of staving off default after the debt-ridden country found itself essentially locked out of the international market by prohibitively high interest rates demanded for its bonds.

Athens must start repaying the loans in the first two years after the programme ends.

“This means we are going to have a significant hump in debt service repayment as soon as the programme ends,” said IMF mission chief for Greece Poul Thomsen.

“We are confident that Greece will be able to return to the market during the programme period,” he said, but added that it was “admittedly a question” as to whether Greece would be able to tap the market for the full amounts needed to refinance its existing debt and repay the bailout loans.

“We are aware that this is an issue that raises some concern in the markets. We have various options for dealing with it,” Thomsen said.

One option would be to allow a longer repayment period for the rest of the rescue loan financing, or to give follow-up loans.

“If there proves to be a question we stand ready to exercise some of these options. But there has been no decision taken,” Thomsen said.

The troika also said Greece must make an “extra effort” to meet the target of reducing its deficit to 7.5 percent of gross domestic product in 2011, from the 15.4 percent it stood at last year, and that the government had agreed to take new measures to broaden tax bases and eliminate wasteful spending.