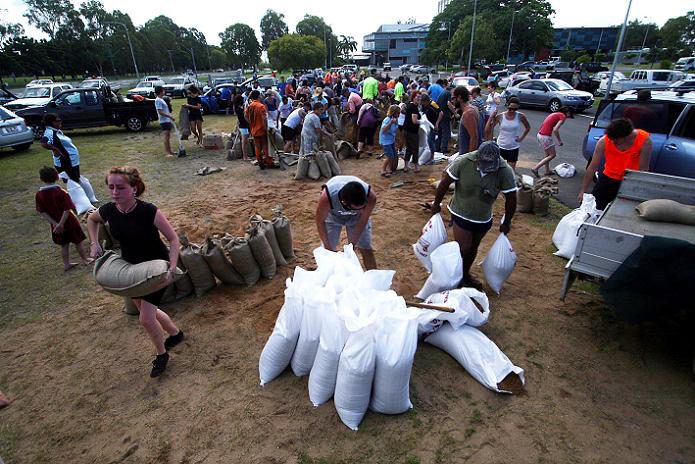 Residents fill and collect sand bags from a council supply drop in preparation for a cyclone in Townsville on Tuesday, Feb. 1, 2011. Severe tropical cyclone Yasi is on track for a direct hit on Cairns, forecasters say but with the cyclone not expected to make landfall until about 1am (AEST) on Thursday, that could still change. (AAP Image/Stewart McLean)

Around 200 families from St John the Baptist Greek Orthodox Church in Cairns have evacuated their homes as Cyclone Yasi moves menacingly on course toward Far North Queensland.

Trinity Beach, Clifton Beach, Innisvale and areas near the water are among those evacuating, the Parish priest Father Constantine Tsacalos told Neos Kosmos this morning.

“The wind is just picking up now, pretty badly, the trees are bending over hard and the cyclone is coming at 195 kilometres per hour,” Fr Tsacalos said.

As residents await the cyclone, predicted to hit Queensland’s coast at ten o’clock tonight, there is a general feeling of fear, he said.

“There’s fear because we all know it’s never been like this before. The sky has gone a bit dark and cloudy; there’s that eerie feeling of destruction coming along,” Fr Tsacalos said.

Six evacuation centres have been set up in Cairns, however only two of them are cyclone rated, Mayor of Cairns, Val Schier told reporters. St John the Baptist Greek Orthodox church, which is set quite high above ground, is one of the council’s designated evacuation facilities.

“Where we are at the moment we just have to stay bunkering down,” Fr Tsacalos said, adding “the council has plans in place, but nothing can really prepare us for a storm of this calibre”.

Most of the brick houses in the area are built to withstand 200 kilometre per hour winds, however winds from Cyclone Yasi are estimated to hit the coast at 300 kilometres per hour, while the wave surge is two metres high.

“If the wind doesn’t get you, the wave will,” Fr Tsacalos said.

“We are organized, it’s been done before, but there’s still fear. Preparation is good but the expectation is we just don’t know what to expect”.