Neos Kosmos turned 54 last week as Takis Gogos, one of the founders, celebrated his 80th birthday 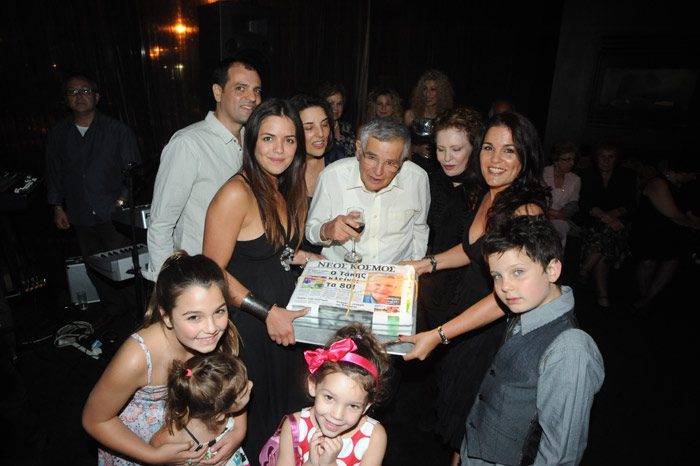 Neos Kosmos celebrated its 54th birthday last Sunday. The ethnic newspaper first published its four-page edition in 1957 and has subsequently grown from strength-to-strength.

Today, Neos Kosmos is one of the longest serving Greek newspapers in Australia, and is the largest ethnic newspaper in Australia. Both Greece and Australia, the community and the world has changed dramatically in the past 50-plus years and Neos Kosmos has had to adapt and change too in order to survive. And while other media publications are falling by the wayside due to the rise of the internet, Neos Kosmos has tackled online global immediacy head on by giving readers up-to-date and topical news through high quality and objective journalism.

It also provides readers with information on issues facing the Greek-Australian community. The English edition began as a supplement to the Greek Neos Kosmos over 25 years ago. Moving with the times, Neos Kosmos has invested significantly in the English edition, which now comes out as a stand alone paper with a Greek language supplement every Saturday. The Saturday edition will be officially launched on Wednesday 23 February by the Premier of Victoria at the Arts Centre in Melbourne. Paul Capsis will be performing at the event, as will Ross Wilson.

The ethnic publication also has a strong online presence, seeing the news of Neos Kosmos read everywhere in the world, from Melbourne, Athens, New York, Mumbai, Beijing and Barcelona.

The newspaper had a double birthday celebration last week with the 80th birthday of one of the founders and publishers of Neos Kosmos, Takis Gogos. Takis Gogos, who was born in Chios on February 13, 1931, arrived in Australia on January 1, 1950. He was active in the Greek-Australian community as the secretary of the Pan-Hellenic association Orpheus, which developed cultural events and services in support of newly settled Greek immigrants.

He also played an active role in the executive committee of the Greek Orthodox community of Melbourne, Victoria. He was also involved in the committee, Bring Democracy to Greece, which worked hard to democratise Greece. His work also led to the establishment of a Modern Greek Department at the University of Melbourne. He is also a founding member of the Antipodes Festival, of which Neos Kosmos was and is still the principal supporter.

His greatest success was working with Nondas Pezaro and Christos Mouriki in establishing Neos Kosmos in 1957. From the humble beginnings of a small four-page newspapers, Neos Kosmos now has tens of thousands of Greek Australian readers across all the generations. Christopher Gogos, Taki’s son, is now the Managing Director and Neos Kosmos is in safe hands, remaining at the forefront of ethnic publications in Australia.