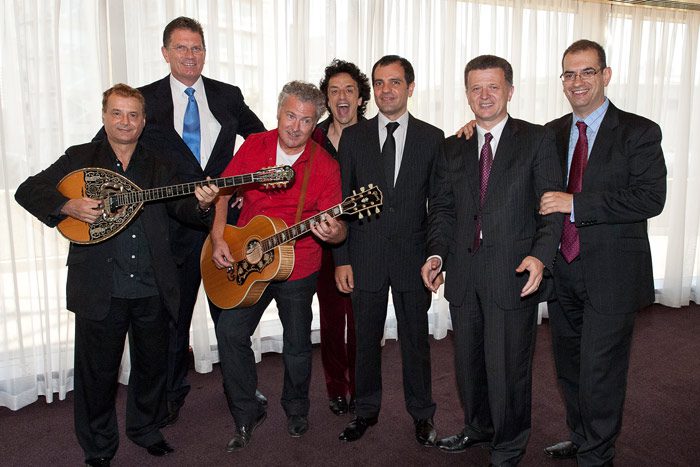 Victorian Premier Ted Baillieu praised Hellenism and highlighted its impact on him as a young architect, at the official launch of Neos Kosmos Saturday edition on Wednesday.

He spoke of how he and Multicultural Affairs Minister Nicholas Kotsiras were able to wrangle a rare opportunity, leveraging on Mr Baillieu’s architectural credentials, to be allowed in the Parthenon.

“I still get goose-bumps when I remember the Greek flag snapping to the right as I stared out onto Athens through those columns,” the Premier said.

Over 140 guests, including business leaders; state and federal politicians; community representatives; artists, writers and other prominent members of the Greek Australian community, came together at the Victorian Arts Centre to celebrate the new Saturday edition of Neos Kosmos.

The launch opened with a moving performance by Paul Capsis singing Angela’s Sea, a song about the voyage of his maternal grandmother to Australia in the late 1940s on a ship full of migrants.

Australian veteran rocker Ross Wilson closed the proceedings with the iconic Eagle Rock only this time with George Spirou on bouzouki.

Following Paul Capsis, English Editor Fotis Kapetopoulos spoke and acknowledged that while the Saturday edition of Neos Kosmos has been in circulation since last July, attention to detail has been the reason the official launch was prolonged until now.

“All of us tried to get it right, or right as possible,” Mr Kapetopoulos said. “At the end it’s about journalism of the highest order; independent, fearless and exciting.”

The English Editor emphasised Neos Kosmos’ diverse readership, saying: “You do not need to be Greek, you don’t need to be able to read Greek, all you need is to have a Hellenic perspective.”

Mr Kapetopoulos differentiated between “Greekness” which is “problematic” and Hellenism which is “universal”. He spoke of the “unique multicultural Australia” and pointed to the “majestic Paul Capsis” as an example of “creative excellence based on a hybrid culture” which make us all Australians.

“I think of my nine-year-old son, who has Hellenic and Spanish heritage, as an Australian who will also read Neos Kosmos in years to come,” Mr Kapetopoulos said.

Publisher Chris Gogos thanked the hundreds of thousands of readers who have supported Neos Kosmos for 54 years and said the paper would not be here today, or have been able to survive, if not for the way Melbourne embraces all cultures.

The development of the English Edition dates back over 30 years.

“In 1976 my father took the very bold step of introducing an English page in Neos Kosmos, a decision he was criticised for at the time,” the publisher said. “Over the last several years it’s been my vision to be where we are today.”

The new Saturday English edition is a reflection of today’s Hellenic Australian community, Mr Gogos said. “It maintains the values of our parent publication, it’s the voice of the new generation of Greeks and, most importantly, it’s here to listen and express a voice for our readers, a voice that comes from a Hellenic perspective.”

“For more than five decades it [Neos Kosmos] has offered its readers assurance that while the world outside may change and shift, you could find some comfort in the familiarity of this printed page,” Mr Baillieu said.

Addressing the room Mr Baillieu joked “because it is the English language edition I am going to suppress what is otherwise my natural instinct to speak Greek to you.”

Mr Baillieu said the official launch was symbolic of Victoria’s place in multicultural media referring to last weekend’s Neos Kosmos by pointing to the front page.

The headline ‘The M-word is back’ hailed the move by Immigration Minister Chris Bowen in rubber-stamping a reborn multiculturalism policy. The page came with a banner thundering ‘Shame on you’ signalling an editorial inside that tore strips off Tony Abbott and Scott Morrison about the Christmas Island mourners.

In closing, the Premier also announced a new grant under the Victorian Multicultural Commission’s “community strengthening” category where media outlets can apply for grants to support young aspiring journalists to gain work experience.

Mr Baillieu awarded the first grant of $5000 to Neos Kosmos English Edition to go towards the mentoring of an emerging Greek Australian journalist.