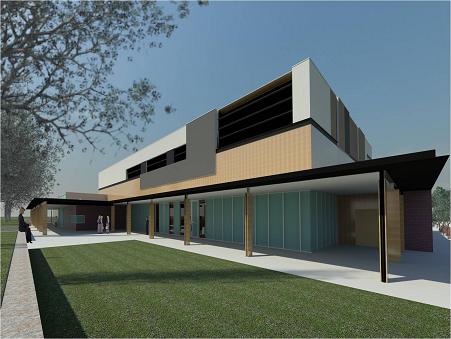 The construction of the multipurpose hall and eight new classrooms has come in at a total cost of $8.5 million with the new hall costing approximately $5 million, Mr Papastergiadis told Neos Kosmos.

The 550-600 seater hall will create opportunities for indoor sports, performing arts, community events and whole school assemblies, which were previously held outdoors due to space restrictions, Mr Papastergiadis added. “The school has been operating for 21 years yet has had no central meeting place,” Mr Papastergiadis said, adding, “since the music rooms have been up and running we’ve had a 50 percent increase in students taking up music so it’s had an immediate impact.”

The modern design building, which took one year to construct, will act as a beacon for attracting new students to the school, Mr Papastergiadis said. “It finished on time and on budget, which is important for Greeks,” he said. “From an academic perspective Naplan results show we’re ranked as one of the top three schools in the area. With our exceptional results we’ve now got the facilities to match.”

Substantial funds have been raised for the project by the Greek community, with donors including the Andrianakos family, the Greek government, GOCMV and selected school families. An Australian government capital grant and Westpac bank also contributed, while the Bank of Cyprus provided over $100,000 towards both the new classrooms and the new multi purpose hall.

The school’s new classrooms will be launched separately on May 27.