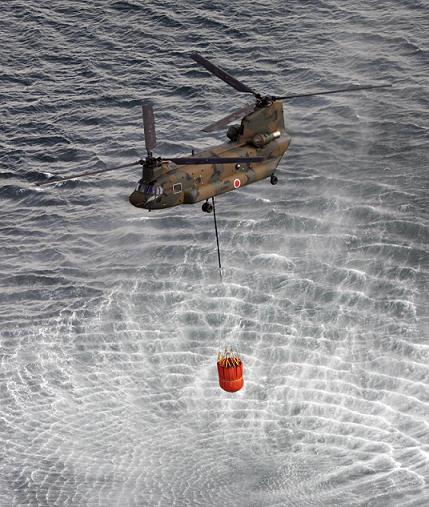 Engineers in Japan have been working frantically to reconnect electricity so the crippling cooling systems at the stricken Fukushima power plant can be reactivated. On Thursday military helicopters started dumping water onto the reactors to douse fuel rods and prevent more radiation from leaking.

George Dracoulis from the Australian National University’s department of nuclear physics said putting cold water into something very hot may be problematic. “Just as when you overheat your car, for example, you don’t go pouring cold water on it,” Prof Dracoulis told Neos Kosmos. “Certainly with the Three Mile Island incident they didn’t know there was no water in there and eventually it just went through its process naturally and had a partial damage and partial meltdown to the core,” he added. Dropping water from a helicopter from an unknown height also means dumping something very heavy onto a unit that might now be fragile, if it’s been partially burnt, which will most likely cause breakages, Prof Dracoulis said.

“In the end this is a loss anyway, they won’t be able to recover this pool or probably won’t recover the other reactors, but by putting water in the top they’re going to break some things and that might exacerbate the situation with emissions.” The water thrown from helicopters, following Wednesday’s fire, went into a storage pool, not the reactor, Prof Dracoulis clarified. “It’s the same sort of situation as inside the reactor – apparently they don’t have recycled cooling water at the moment – and the temperature in the pool got hot and they probably evaporated water and exposed the fuel rods that were sitting there and then had a fire,” Prof Dracoulis said.

“The issue with that is that the fire is not inside the reactor vessel it’s essentially putting material directly into the atmosphere. That’s in fact the most serious thing that’s happened.” In the storage pool a head of water is normally several metres above the top of the fuel rods, which sit down low in a deep swimming pool type container, acting as a main radiation shield stopping the gamma and beta rays coming out so workers onsite can look into the top of the pool.

Without the radiation shield the area becomes highly radioactive with the main issue being that workers can’t go in to put water in. “This is cyclic, a continual rolling series of problems, because they can’t go near that part of the reactor so they can’t do what they would normally do if they had a problem,” Prof Dracoulis said. Not having stable power and other onsite resources, also means the various processes being implemented are being stalled halfway, creating more problems, he said. Radiation exposure is a possible threat depending on the levels and the types of radiation, Prof Dracoulis said. “That’s the issue with the burning of the fuel rods. You get gases going up into the atmosphere, some of which are radioactive.

When you burn something and it goes into the atmosphere it travels in some sort of plume depending on the weather and the wind currents at particular altitudes,” he said. The burning of the rods may also put some ash into the atmosphere, which will most likely go up and come down a bit more locally, Prof Dracoulis said. “There might be an issue of contamination close to the reactor, depending on where it comes down, and then you have the more complicated issue of where these plumes are going.” Some of the short lived radioactivity in the material in the plumes decays as it travels so the longer it takes to go anywhere the better, Prof Dracoulis said. “Where it’s going to go is not clear, it’s very hard to know precisely.

The main danger with radioactive material in the atmosphere is if you ingest it and get it into your body,” he said. “You could breathe it in and you could also get it through the food chain, which is the slightly longer term but also serious issue of material that falls out in the local area,” Prof Dracoulis said. “People are evacuated for this reason, something that did not happen at Chernobyl. They said nothing had happened so they left people in an agricultural area with cows grazing, which produced milk, which they then fed to their kids and this resulted in over 4000 cases of children contracting Thyroid cancer, which could have been completely avoided if they’d banned milk consumption and distributed potassium-iodine pills”. In most cases of radioaction there’s no direct danger if you’re a few yards or miles away, but the further away people are from it, the better, Prof Dracoulis said. “This is why they’ve advised people to stay indoors, not that they’re in danger of direct radiation”.