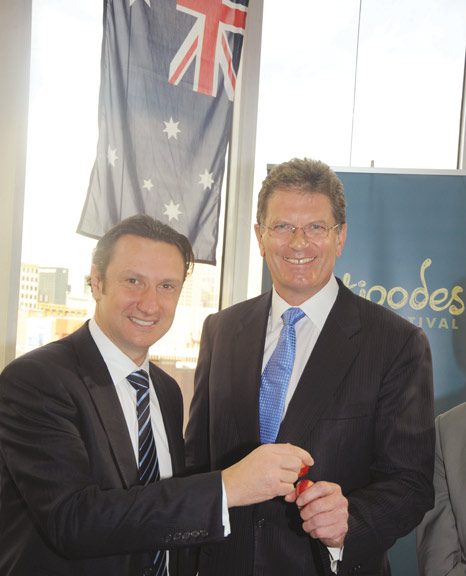 Greek Australian community members, leaders and businessmen and women, gathered in Lonsdale St yesterday as Victorian Premier Ted Baillieu presented the community with a $2 million cheque, which will go towards the refurbishment of the community’s Lonsdale St headquarters and the development of a cultural centre on the premises.

The Consul General of Greece Eleni Lianidou and Minister for Multicultural Affairs Nicholas Kotsiras were among those present for the presentation. The funding was promised by the Brumby government but not budgeted for, will be paid at the end of the financial year 2012.

Last year GOCMV members voted for the plans to build a 13 story Hellenic cultural centre on the site of the current Lonsdale St headquarters. Four floors will be retained by the community for offices, a common room, theatre, a teaching area and a library, as well as Greek community archives. There will be collaboration with RMIT and La Trobe University to use some materials as part of the selected courses on offer.

The other floors will be released out commercially, which President of of the GOMCV Bill Papastergiadis believes will generate $900,000 in income annually. The entire cost of construction is predicted to be around $12 million.