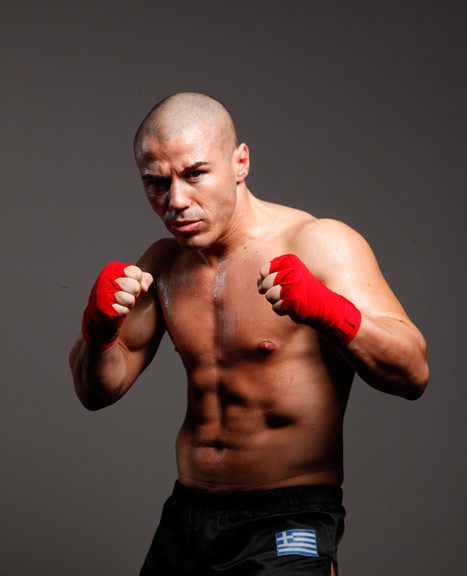 Following a spectacular victory at the W5 Grand Prix KO Tournament in Moscow, Greek fighter Mike Zambidis is preparing for his next fight, where he’ll go head-to-head with Australian John Wayne Parr in Melbourne next weekend.

Zambidis is all set for the challenge. “I am very well prepared and I look forward to hearing the bell ringing,” he told Neos Kosmos, adding “my goal is always the victory and only this”. The last time Zambidis went up against John Wayne Parr was in Australia in 2009, where Parr won by a small difference. The Greek national, who has fought in Melbourne for over a decade consecutively, says his enthusiasm for the city has not waned.

“I have fought in Melbourne for the past 11 years, always with the same excitement and joy,” Zambidis says. “The fact that the Greek Community in Australia supports me with so much passion for all these years, does not block me out, instead it gives me energy to win my fights”. As a mixed martial arts fighter (or ultimate fighter), Zambidis incorporates a variety of techniques in his fights.

“Out of the 85 knock outs that I have achieved so far, 75 were with boxing techniques,” he says, “but, kick boxing with K1 rules is the one that I prefer.” Zambidis trains daily making sure that in a week he completes four to five kick boxing training sessions, three sessions of training with weights and three jogging workouts. “I make sure that I follow a healthy diet and a healthy lifestyle in general,” he says.

As for diet, the fighter eats five meals during the day, which are rich in carbohydrates, low in fat and with little amount of protein. “One day before the fight, my weight is 70kg with low rate of fat,” he says. For his upcoming stoush with John Wayne Parr, Zambidis will weigh in at 72kg, which means no specific dieting as it’s more than his usual allowed weight.

“The fact that I am obliged to follow a rigorous regime does not make me feel pressure because good nutrition and the fact that my weight is on my category, are way of life for me and make me feel fit and healthy,” he says. “The best part of my profession is that I take care of myself, eat properly so that I feel healthy and well. The biggest challenge is the effort I put in all the battles I give and generally the reconciliation with myself in order to exceed the limits, responding to both high and extreme requirements.” After 165 fights, against the world’s top contenders, Zambidis feels good about a lot of battles.

“This year I especially enjoyed the match with Dzhabar Askerov in finals of W5 in Russia, which I won, and the final 16 in K1 in Tokyo against Chahid whom I also beat,” he says. “This fight was characterized both by experts and fans, as the match of the decade.”

Melbourne fans will have the chance to see Zambidis battle John Wayne Parr on May 27, in a much anticipated rubber match.