A tale of a lovelord wander

John-Paul Hussey talks to performer extraordinare, Paul Capsis about his craft and what the buzz is about 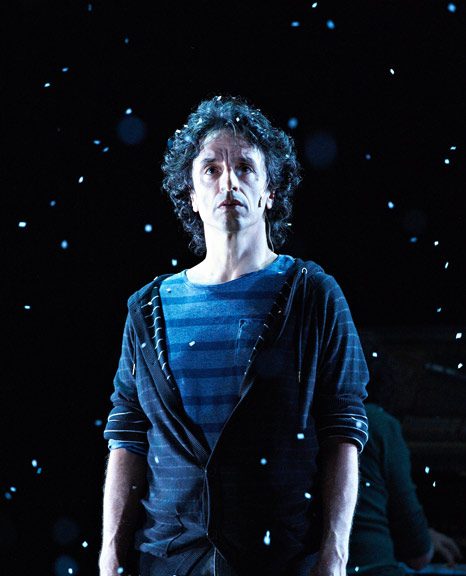 Paul Capsis has a lot of fans out there. When you talk to any them, they gush and when you ask why, well they gush even more. The critics too. And then there’s the countless awards he’s received. So it’s fair to say Capsis has most deservedly earned the status of ‘Icon’, if not as a fully registered national treasure.

If you haven’t seen Capsis perform, now’s your chance because he has a show coming to Melbourne, Die Winterreise, a theatre production based on Franz Schubert’s song cycle of a lovelorn wanderer. Capsis is famously know for sharing his whole body in his cabaret shows with other iconic chanteuses from the past, take Judy Garland as an example, that audiences wonder whether he’s channelling their spirits. The effect is so authentic one could also imagine these spirits have also been good enough to lend him the souls of their own personal make-up artists.

This time round though, Capsis is sharing the stage with dancer James O’Hara, jazz pianist Alister Spence, and theatre veteran George Shevstov. On the subject of ‘souls’ as Capsis said, “I’m playing a ghost-like figure who’s in the ears of the central character, played by George Shevstov, reminding him of this journey of his life, his memory so to speak.” The journey this character is on, has been extemporised by some text contributed by writer Tom Holloway which Capsis said, “adds to the story through a monologue and this is a new element to this production”.

This is not the first time Capsis has collaborated as a singer with other art forms, having performed in theatre, musicals and burlesque shows. “I’m not one of these singers that sits in a room and comes up with stuff. Although I can, I prefer to collaborate with other people, which is why I like to work with musicians in my concert stuff or with theatre pieces where I collaborate with actors,” said Capsis. “In the theatre, it’s the director’s vision and when Matthew [Lutton] says I want to try this or that, we do it.”

Lutton is the director of this particular version of Die Winterreise. “I think in theatre it’s very much a director’s game, it’s their vision, as it is in film. But then again, in theatre things happen more naturally and more freely. There’s more of a genuine support, compared to the other work I do. Actors are the best collaborators. I think actors are less suspicious; they are also allowed to give more of themselves. In musicals, the performers are more questioning or are always thinking, ‘Oh, I don’t know about that’,” said Capsis.

Capsis has performed with a version Die Winterreise before, The Lost Echo, directed by Barry Kosky. Kosky has also worked with actors and singers sharing the stage. But when it comes to the nature of collaboration, Kosky once said, when he was artistic director for the Adelaide Arts Festival, that extracting art funding from the corporate world is far easier than asking chorus members in an opera to move slightly to left of the stage. Lutton’s vision is not for Schubert purists, as Capsis was keen to point out. Schubert’s music is being used as a platform to create a new work.

“There are even times when I’m not singing at all, but where I’m making sounds,” as way of contributing to the mood of the show. Therefore, audiences should enter the theatre with a respectful and open mind and not expect carbon copies of ‘Schubert Genius’. Then there’s the opposite end of the spectrum, where there is no respect all. As Capsis experienced in Perth one night when an audience member pulled out an iPad mid show. “I thought at first it was a technical mistake, but then I realised I could see their face reflected on the screen…I couldn’t believe it,” said Capsis.