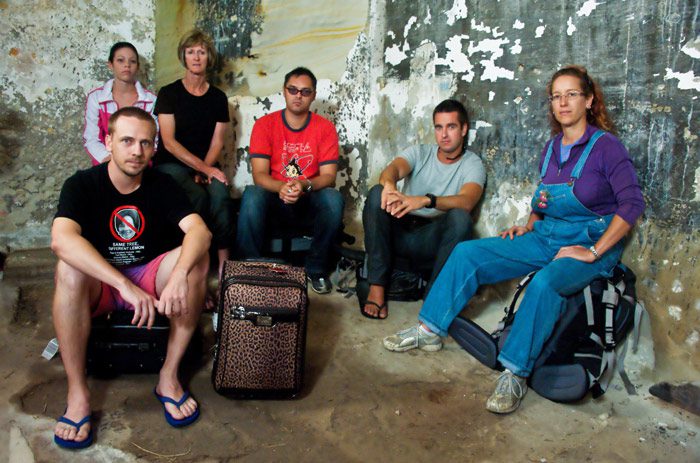 In light of the recent phone hacking scandal to hit the Murdoch Empire, with the numerous arrests and the closure of the News of the World, journalism as a profession has never looked so low. But for Peter Newman, Head of Production and Development at SBS for the show Go Back to Where You Came From, the can’t-quite-believe-it tone in his voice couldn’t hide his beaming pride.

That rare pride of achieving something that transcends those everyday cynicisms, that many in the media have reluctantly learnt to bare. “We knew when the production crew came back from filming we had something special on our hands. The response and the impact of the series have been really fantastic. The audience figures alone for SBS have been the best we have ever seen in the rating period and we trended number one on Twitter worldwide,” Newman told Neos Kosmos.

In total more than 2 million people have tuned into the series nationally on SBS One. The final episode brought 420,000 new people to the series. Australians all over embraced a healthy debate around the content on social media forums such as Twitter and Facebook, at work, with friends, so much so that a special forum television event was created to open up the debate on nation-wide television. Go Back To Where You Came From: The Response had such a wide appeal that it has already been dubbed the highest rating show of the year for SBS. The show has also had a terrific response from the international press: a front page on the International Herald Tribune and massive coverage in the New York Times online and on the BBC.

The border phenomena has always triggered the world’s imagination, it also scares bejesus out of the ill informed or the plain paranoid. This stems from problems with population explosion, political and economic unrest and food shortages that have created numerous refugee camps and heavy border patrols on every continent. Old borders like Mexico, Turkey and Greece, SE Asia, Germany, Russia, the UK and, of late, thousands fleeing from Tunisia and Libya across the Mediterranean due to recent conflicts in Northern Africa.

“I’m asked often what Go Back To Where You Came From is trying to achieve, and it’s to show the sheer epic scale and complexities of this global issue and I think the series went in some ways in achieving that,” said Newman. When I interviewed director Ivan O’Mahoney before the show aired, the issue of preaching to the converted inevitably came up. “When the results came in it was clear we had reached a big and at times a different audience for SBS. This is something I’ve heard a lot and that it was shame this show wasn’t on Channel 9 or 7. The fact is, it’s only SBS that would make such a bold series like this and on such an important issue,” said Newman.

“The online feedback we’ve been getting has been on a massive scale and quite unprecedented, like people saying ‘I started out with very negative views about this situation and after watching this series I’ve totally changed’ and like some of the participants in the series I guess the challenge to the audience is the same and clearly some people have had big changes after the whole experience,” he added. And one of those people who received a lot of attention was ‘Raquel’ or as she was dubbed repeatedly on the social networks, ‘the Bogan Bitch from Blacktown’.

“Clearly there was a lot of interest in Raquel, but Raquel had a bit of rough time, particularly on Twitter during the transitions of the three episodes,” said Newman.

“She’s learnt to never judge a book by its cover and she’s not going to refer to people from Blacktown as black people but as Africans,” said Newman.

There’s also the story of Raquel referring to the Hijab as a tea towel, but then meeting a woman who wore one, and them getting on so well they eventually swapped telephone numbers. Again, this is the essence of the SBS charter to see the human behind the mask. It seems there is a strong need to not only enlighten the ‘Raquels’ of this world, but also the youth on a much broader scale. SBS has already preempted this need.

“That was a key part of the series, is that we devise in partnership with Refugee Council Australia and Amnesty International Australia a schools pack which was distributed to every secondary school Australia-wide just before the series was transmitted,” said Newman. The other good news is that SBS has been in discussion with countless other TV networks regarding the show. In North America, Germany, France to name only a few – all them extremely keen take up the Go Back To Where Came From formula.