Alex & Eve are having a baby! 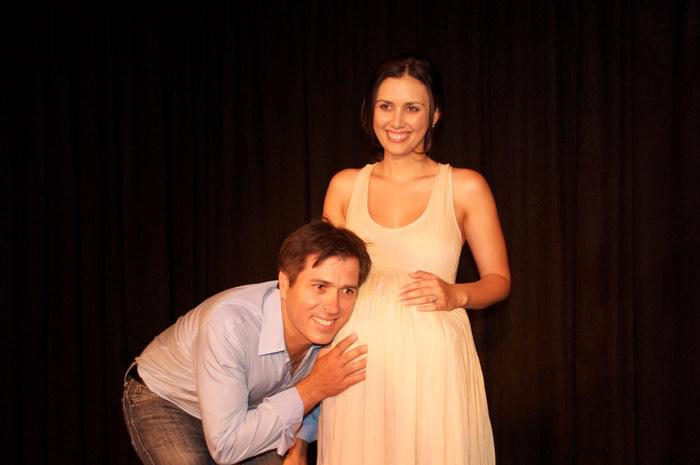 Family politics are complicated at the best of times. As soon as you think you’re out of the woods with one sticky issue, another problem falls on your lap, twice as big and just as messy. Playwright and actor Alex Lykos has created a trilogy of plays dealing with family dramas, with a particular slant on the problems that arise from cross-religious marriages.

The first play Alex & Eve – Where It All Began, was about how a couple survived their religious differences. Alex is Greek and Eve is Muslim with a Lebanese background. The sequel The Wedding is how Alex and Eve learnt to survive their friend’s advice and their parents help.

The fact this project has emerged as a trilogy is in some way reflective of the classic problems that occur between three generations of most immigrant families. Lykos explains, “Alex and Eve are torn between their roots and being contemporary Australians and that’s a constant battle they have.” The style of the show, although dealing with traditionally controversial topics, “is a comedy mostly and it drops between the stylised and naturalism. For example, in the first play the parents shuffle on as one big unit, pressuring Alex with ‘when are you going to get married?’ We call it the choo-choo train – the block.”

Another stylised device used is, “Where we jump into Alex’s head, into his stream of consciousness, and all these women are giving advice on how to meet the perfect woman,” continues Lykos. So far, the first two parts have been a success with a huge audience response.

“The first show in 2006 was a 100 seat venue and it did really well and we did it again in 2008 in the same venue. But now we’re in a 300 seat venue” says Lykos. Like the audience numbers, their demographic has also grown, “When we first started it was predominately Greek: me being Greek and my cousins and relatives coming. But as the show got bigger and bigger, we started seeing a stronger influx of Arabic audiences: Lebanese, Afghanistani, Iraqi,” said Lykos, adding “back in 2009 when we premiered The Wedding we started seeing Muslims of all backgrounds, like Indonesians and Turkish.”