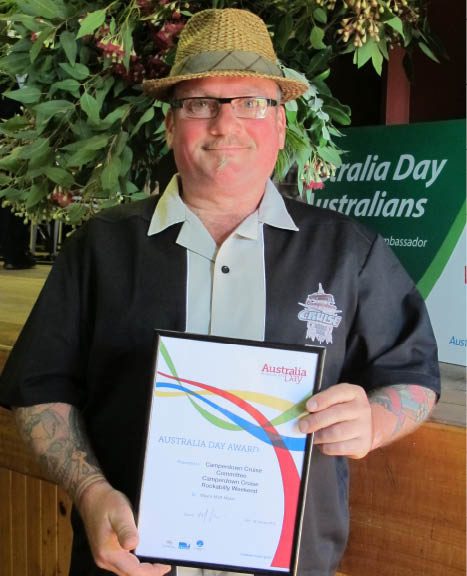 “I’ve had so many people ringing me up, and some don’t even know what panelbeating is!” Arthur Matsakos told Neos Kosmos this week, following his recent announcement that he would be giving his car restoration business away for zip.

Arthur (48) who started Relic Restorations in Camperdown, Victoria eight years ago, made the decision to allow him to pursue his real labour of love, coordinating the Camperdown Cruise Rockabilly Weekend, an event that has grown into a major annual project since humble beginnings in 2007.

“Rather than just shutting the business down, I thought it would be an opportunity to give someone a go,” said Arthur.
I hear about the job losses, people sleeping under bridges and here in Camperdown you can buy a house for $120,000. I wanted to give someone an opportunity in life, make a start, have a go.”
Arthur says all budding applicants need is a willingness to work hard, and to take on the responsibility of a $1200 a month lease. An understanding of spray painting and panelbeating would be an advantage.
“It’s ongoing work and they inherit the customer list,” says Arthur.

“They can start working straight away. I’m going to leave them the desk and the computer, but they also need their own tools. I’ve had mine since I was sixteen and I’m keeping those.”

It was as a teenager that Arthur’s passion for iconic cars and rebuilding them, began – with a ’57 Chevy. In his new career as full-time Camperdown Cruise director, there will be no shortage of fine automobiles. This year’s festival in October will see over 600 hot rods and classic cars taking part.

“I absolutely love it that Camperdown, with a population of 4000, turns into a population of 30,000 over that weekend,” says Arthur, who began the festival five years ago as a sausage sizzle with a few mates outside his workshop.
“This year we’ll have rockabilly acts coming and playing from overseas and across Australia. Fashion parades, 50 trade stores and the classic car show.
“It’s all about the smiles on people’s faces, the music, the dancing, it’s just such a wonderful feeling bringing people together.”

The success of Arthur’s Camperdown festival has resulted in him being commissioned to produce a similar and possibly even larger event at a second western Victorian town in February 2013. It’s location will be announced this October.