The Coalition’s policy agenda based on the Anglosphere is, “radically out of step” says former PM 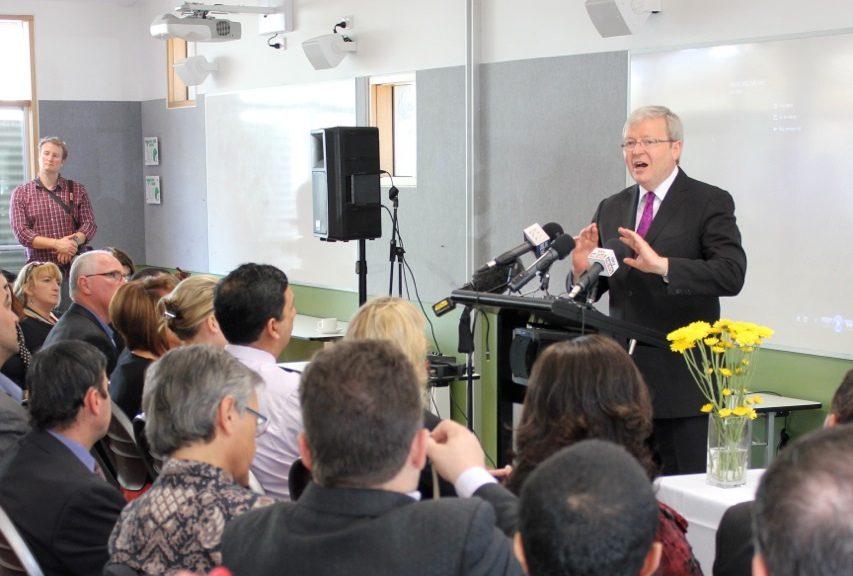 Having delivered a keynote speech in the heart of the city’s culturally-diverse suburb of Broadmeadows, Mr Rudd tore into Tony Abbott’s views on a future Coalition government’s foreign policy and multicultural agenda. “I don’t think he’s got the temperament or the policies for Australia’s future,” said Mr Rudd.

“On sensitive questions like multiculturalism, for a guy who goes out there in print and says that most of the modern world is made in English – this is in his book Battlelines – and puts great faith as the cornerstone of Australia’s future foreign policy [being] in what he describes as ‘the Anglo-sphere’ – I believe we’ve got a guy there who is radically out of step with what this country needs for its future.”

Mr Rudd made his comments at a public meeting called by Federal Member for Calwell Maria Vamvakinou, to discuss the importance of interfaith dialogue in multicultural communities. Broadmeadows is part of the Calwell electorate, where residents born overseas represent almost 40 per cent of the population. One third come from non-English speaking countries, particularly the middle east.

During Mr Rudd’s speech at the Banksia Gardens Community Centre he steered clear of party politics, preferring to remind the audience of the benefits to Australia of its cultural and linguistically diverse population. The former prime minister said he was ”totally blown away” at how successfully Australia managed its diversity, declaring, “what we have built in this country together is nothing short of a modern miracle”.

Mr Rudd said that he was a proud father of a daughter who had married into the Chinese community, and a son who had a Malaysian wife, and then joked: “I was shocked recently when our youngest son came home with his first girlfriend. He’s 18 and she’s Caucasian – so much so, that [my wife] Therese and I thought we had to undertake some cultural sensitivity training on how to deal with Anglo-Celts!” The appreciative audience of around 200 people – who spoke at least ten languages and represented five religions – lapped it up.

”That is as Australia wonderfully is, and how it is evolving,” Mr Rudd told them.”Diversity is a strength.” In a speech that avoided analysis of recent tensions thrown up by the anti-Islam film that sparked violent protests in Sydney, the former PM preferred to speak in universal terms. A quote from a 19th century Christian preacher should be a guiding light he said: ”In things essential: unity.

In things non-essential: diversity. In all things: love.” Briefly touching on the subject of the visit to Australia by the controversial Dutch anti-Islamist MP Geert Wilders, Mr Rudd said: “When anyone comes to this country to preach hate we are strong enough and robust enough as a country and a community to weather that, and to absorb it. Frankly I hope, to ignore it.”

Asked if he received many invitations nationally to speak on matters beyond his own constituency issues, Mr Rudd said: “I get a lot more than I ever accept, but when colleagues and friends like Maria [Vamvakinou] ask me to attend functions – which are important to their local community, but more broadly, important on national themes, such as multiculturalism – then I’ll be there. “Part of my reason for remaining nationally engaged is because as I’ve said time and time again – I’ll do everything while I draw breath to prevent Mr Abbott from becoming the next Prime Minister of Australia.”