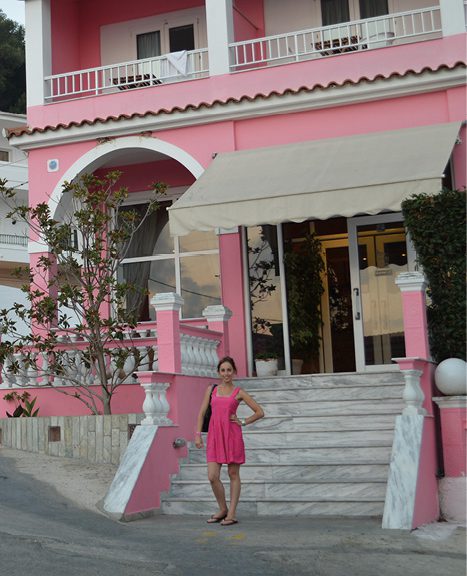 We’d been warned about the ‘lawless’ nature of the Pink Palace. Yet, when we arrived at the seaside Corfu hostel in the dead of night, it appeared, under the cloak of darkness, to be relatively sedate, bohemian even. It was only when I awoke the next morning that I found myself in Barbie’s recession dream house: a palace of marshmallow and musk hues that would soon become our pink prison.
The sprawling establishment is exactly the kind you could imagine Basil Fawlty running if he skipped across the pond from England to Greece. Numerous dead-spirited, middle-aged Brits comprise the skeleton reception staff, hunched over computers and seemingly untouched by the island sun – though no doubt still genuinely happier behind a desk in the Greek Isles than in dreary England.
It’s late but the foyer is littered with people; a small group of Aussies wearing Havaianas are permanently draped over bar-stools at the 24-hour bar. On arrival it feels fabulously European; there are three dogs sleeping in the entrance and every employee is smoking cigs as they go about their work, although ‘going about work’ appears remarkably similar to shifting in one’s seat or occasionally sighing out loud and gazing three feet ahead.
We’re welcomed into the lobby by a maple syrupy-sweet Canadian host who takes us to fill out a pink registration form; as she distracts us with important documents that resemble fairy-floss we agree to upgrade to a better suite for just 3 euros a night. At first the Canadian’s enthusiastic welcome monologue appears charming; she informs us we’ve missed dinner but that she’s thoughtfully saved sandwiches for us in zip-lock bags. As two weary EasyJet travellers we reacted to this gesture in a similar way you would to someone offering to give you a kidney. Then she really stepped up the game by producing shots of pink ouzo and welcoming us to the island with a ‘yamas’. As I observed her throwing back shots with every other guest that checked in, I wondered if she had a coping device like those barmaids in Coyote Ugly who spit the alcohol back into the empty beer bottle while pretending to do a beer chaser. She didn’t, she drank them all, effortlessly, and this is when I realised that this was the coping mechanism. This is how one survives a permanent state of seeing the world through Rosé-coloured glasses. After watching her recite the exact word-for-word spiel to the newcomers at the table next to us, my friend and I smirk to ourselves as we watch the foolish new travellers being duped by the surprise substitute supper sandwich. Meanwhile we’re fitted with pink wrist-bands that can’t be removed. I ask if they’re absolutely necessary and take the receptionist’s placating smile and flick of cigarette ash as my answer.
The room that we’ve been convinced to upgrade to for three euros extra a night seems luxurious by hostel standards. There’s air conditioning which is fantastic for the first night before the island black-out that lasts the rest of our holiday. There’s also clean sheets and if you crouch in one corner of the balcony you can kind of access one bar of the unlimited wi-fi before it cuts out.
I remain dubious about whether the Pink Palace is a hospitality establishment as it claims, or rather just a place for inefficiency to lie low until the IMF backs off a little. We were initially excited about the plethora of things to do on the island and were up early (11.00 am) on our first day, keen to go kayaking. When we enquired at reception, a pale English woman responded suspiciously quickly, saying “it’s pretty wild out there today, I don’t think you can take kayaks out”, lazily half looking out an imaginary window towards where I presume she thought the beach was – her Vitamin D deficient skin-tone would suggest she wasn’t well acquainted with the geography outside of the front desk. For the entirety of our stay it was too windy, too wet, too wild, too temperate, to kayak. I’d say they had our safety in mind but they redeemed themselves when, after a morning spent knocking back cocktails in the beach bar, we were willingly handed the keys to quad bikes to careen around the island in, no questions asked (but credit card details taken).
However, it was during the witching hours when the debauchery we’d been warned of first truly presented itself. The Pink Palace prides itself on the kind of horrific ‘party nights’ that should remain exclusive to the kinds of frat parties that are portrayed on Beverly Hills 90210. The first was a traffic light party where – from my understanding – wearing any colour except red means you’re up for pretty much anything. Shots were 1 euro and it was only a matter of time until the bartenders moved onto body shots; it’s baffling just how many willing backpackers will wrangle the bikini tops off each other in a race to have whipped cream licked off them by gross strangers while someone else films it on their iPhone. It’s at this point I remembered the other main warning bestowed on me: to avoid the jacuzzi. Peering out towards the ’80s outdoor volleyball court and filthy cesspool of a spa, it doesn’t take much imagination to conceive the other kinds of athletic after-dark activities that ensue there.
Naturally with a few more 1 euro shots and cocktails I’m far more susceptible to the debauchery. My warning to future travellers is that no matter how much you resist, the Pink Palace is the place where you will inevitably find yourself skinny-dipping in the sea with a 22-year-old Canadian lifeguard before having a dangerous liaison on the ledge of the rooftop balcony. If you can’t beat ’em, join ’em.