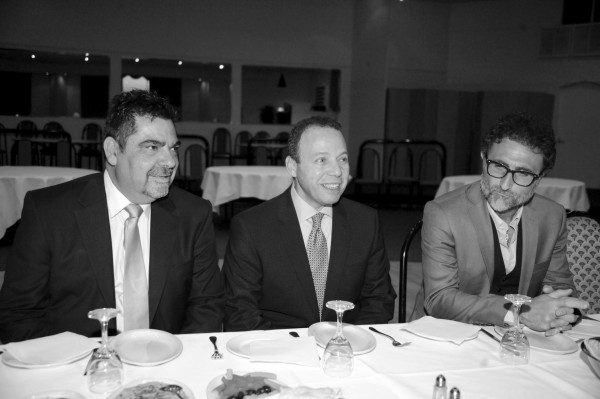 The League of Greeks from Egypt and Middle East (EEAMA) welcomed last week to its premises in Preston the ambassador of Egypt to Australia Mr Ηassan El-Laithy and the Consul General of Egypt in Melbourne Mr Khaled Youssri Risz.

The guests were welcomed by the President of EEAMA Mr Nick Carayanis and the members of the Board and were introduced to the 64 year history of the organisation.

The Egyptian ambassador in his response thanked the members of EEAMA for organising a welcoming function to his honour, congratulated the Board for the successes of the League, highlighted the good bilateral relationship that exists between Egypt and Greece and stressed that he would always be supportive of EEAMA and its objectives, while its members are welcomed in the Egyptian Embassy in Canberra.

EEAMA was established in Melbourne in 1950.

The current financial membership of the League is over 700. The majority of the members or their ancestors had moved in the past from Greece and Cyprus
mostly to Egypt, but also to a lesser extent to other parts of the Middle East.

The thriving Greek community of Egypt was eminent since the late 19th and early 20th century, and it provided Greece with many benefactors, for example Emmanuelle Benaki), and acclaimed poets and writers such as C.P. Kavafy and Stratis Tsirkas.

Although Greek Nationals, a number of EEAMA members are themselves first generation Egyptian born and most studied in Greek Schools and colleges provided by the then prosperous Greek communities in Alexandia, Cairo and elsewhere. A number of Greeks in Egypt also chose to attend French, English or Italian local schools and colleges.

Geopolitical changes in the 1950’s saw the Greek community in Egypt dwindle and most of its members settle in Greece, the US, Canada, South Africa, South America, Australia and New Zealand and to some parts of Europe.

The League of Greeks from Egypt and Middle East is one of the largest and most active Greek organisations in Australia, running with success a number of cultural, educational, social and sports activities.