Dr Panayota Nazou’s Proxy Brides: Experiences and Testimonies of Greek Women in Australia (1950-1971) has been launched with promises of an English translation 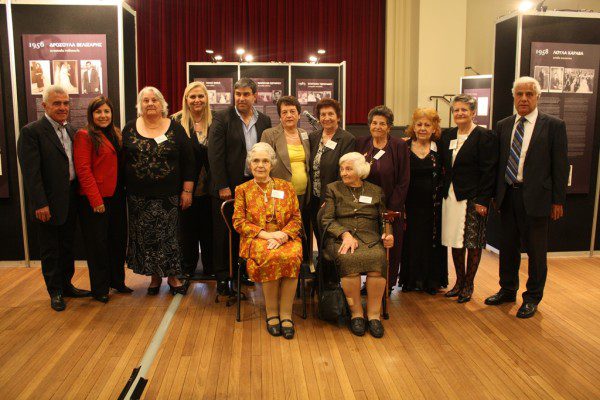 Dr Panayota Nazou’s Proxy Brides: Experiences and Testimonies of Greek Women in Australia (1950-1971) was launched in Sydney, with more than 200 people attending, including some of the ‘proxy brides’ whose personal accounts contributed to the writing of the book.

It was love at first sight for 22-year-old Vasilia Sapounos. After 24 days on a converted freighter – coming to Australia from Greece as one of the many hundreds of young women who arrived here in the late 1950s and early 1960s to marry men they had never met – she took one look and that was it. It took a little longer to succumb to Theodore Ganatzos, the man she first set eyes on when the ship docked at Woolloomooloo wharf in January 1964, but fall in love she did. And 43 years, two children and one grandson later they are still very much together. Their story and that of many other such arranged marriages are told in this book. Of course, not all unions went according to plan, with many women remaining in unhappy marriages for fear of parental reprisal and community disapproval.

In what was a very proud moment for the book’s author, emotion was rife as stories were recounted and references were made to the courage of the proxy brides who endured circumstances that would be difficult to fathom in today’s society.

“My only regret is that I did not complete the book earlier and some of the brides whose stories are told in this book will never see the finished product,” said Dr Nazou as she thanked all those who made the book possible.

The launch of the book accompanied the official opening of the photographic exhibition presenting letters, photographs and newspapers taken from Nazou’s research documenting the heartbreaking journey of betrothed Greek girls in the 1950s and 1960s. While the accounts displayed are generally light-hearted, the sadder reality of some of the women lay beneath the surface.

“These photographs were exhibited for the first time seven years ago almost to the day. It is very gratifying to be able to present this exhibition again and this time to coincide it with the book launch which has been years in the making,” said Nia Karteris, Festival Chair of the Greek Festival Sydney.

Greece, a country politically divided and in financial ruin, with an oppressive culture and open wounds inflicted by foreign occupation and civil strife, forced young women to make certain life changing decisions. These individuals were seeking ‘refuge’ within the confines of arranged marriages, travelling to a distant land.

The book Proxy Brides is the outcome of a research project on matchmaking in the first post-war immigrant generation in Australia. It approaches the phenomenon from the perspectives of Oral History and Gender and Cultural Studies, giving a voice to everyday Greek women, rarely heard in other publications. Their testimonies are presented as a record for future generations and an important primary source. Diverse cultural, psychological and socio-political aspects of the immigrant experience are highlighted in their accounts, which are often dramatic and occasionally tinged with comedy.