The marathon was run, swum and cycled this year to help stray and abused animals 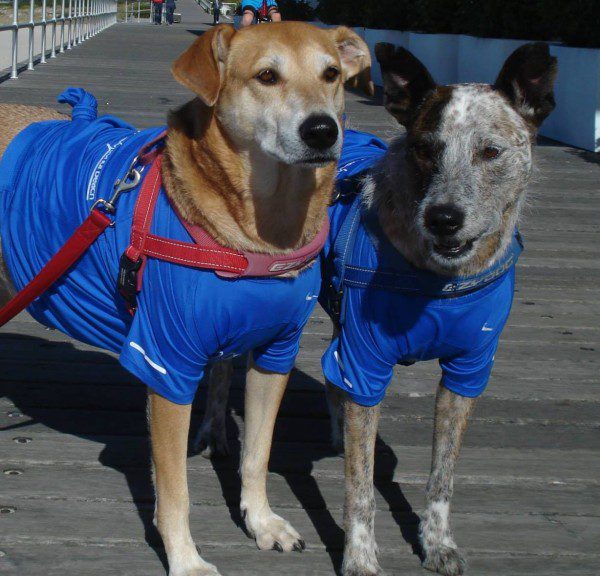 Over 100 runners, cyclists and one swimmer participated in the third Penny Marathon held in both Sydney and Athens.

The marathon, run on July 13, attracted young and old, with seven-year-old animal lover Petros Markantonis from Greece and 70-year-old Theodosia Prodromou from Australia running to show their support and to put an end to animal abuse.

This year, in addition to runners and cyclists, Corfu’s long-distance swimmer Nicole Tryfona joined the team, bringing the marathon to the sea.

“It is an event that takes place to help stray animals, and that’s the same reason I undertake every swimming race, so I said yes without second thought!” she said.

Ms Tryfona swam for five and a half hours non-stop from Alimos to Vouliagmeni beach, when she was met at the water’s edge by cheers and applause from the runners and cyclists who had just completed their 42-kilometre route.

“Every moment was unique. The fact that we had difficult weather conditions made it all the more special, even if the distance we had to cover was relatively short (17 kilometres).

“There are no words to describe the emotion that I felt at the warm reception I received from the supporters at the end. It was a moment that will stay etched in my memory forever.”

And it’s not just people. Former stray dogs are among the participants. Marko and Bowie ran their second Penny Marathon alongside their owners, and were joined by more four-legged runners.

The Penny Marathon – named after a stray animal in Greece whose life was tragically cut short – started in 2012 when three runners ran the original 42-kilometre route from Marathon to Athens as a way to get friends and family to donate money.

When word spread over the internet, the idea soon took hold that this should be an annual event in more countries around the world. Australia joined in 2013, and now New Zealand, Bulgaria and other cities in Greece have expressed interest in staging a PM in 2015.

“When it comes to people that want to participate, there is no standard for the Penny Marathon; that’s what makes it special,” says runner John Spinoulas, who manages the Penny Marathon in Athens with animal rescuer Chrisanthy Efstathiou.

“There are people of all ages, experienced runners and cyclists or with little experience at all, but all with a love for animals, sports and volunteering in common. The reason they do this is to raise awareness of the problem facing Greece’s stray animals in order to establish a strong animal-friendly culture for
future generations.”

Finishing the race, Mr Spinoulas saw the change in attitude for many Greeks and was amazed at the comradery of the runners.

“There was this optimistic spirit, with people everywhere, smiling and happy – despite the difficult conditions of the heat – and with former stray animals with their proud owners in the crowd; all with positive comments and a positive outlook. It was priceless.”

The reality is that unimaginable cruelty towards animals still exists around the world, in Greece especially.

Recently, a hotel owner in Cyprus told two of her employees to dispose of a stray poodle that had been wandering the grounds in search of food. They threw
the dog into a cardboard crushing machine and if it weren’t for some tourists nearby who heard the dog’s screams and came to its rescue, the story of Billy would have gone unnoticed. Billy fought hard for his life but died a few days later.

“This is the reality that stray animals face in countries like Cyprus and Greece,” says Mr Spinoulas.

“Only a few days ago, a restaurant owner in Evia, Greece, lured a three-month-old pup into his restaurant with food in order to club it to death with a chair.
Little Maggie was later euthanised because of irreversible brain damage.”

“This is what compels people to participate in our event. They want to take a stand and this is a unique yet effective way to build solidarity among others
who feel the same way, raise awareness and address this brutality and the apathy that exists in the community at large,” adds John.

The Penny Marathon advocates for adoption, neutering and spaying of stray and unwanted companion animals in Greece, Australia and other countries. It also honours the work of volunteers who try to save the lives of these animals. More information is available at www.pennymarathon.com