Panos Armenakas has done more at 16 than many greats can say they achieved in a career. Already in pre-season training for Serie A Club Udinese, the
Greek Australian is dominating headlines. 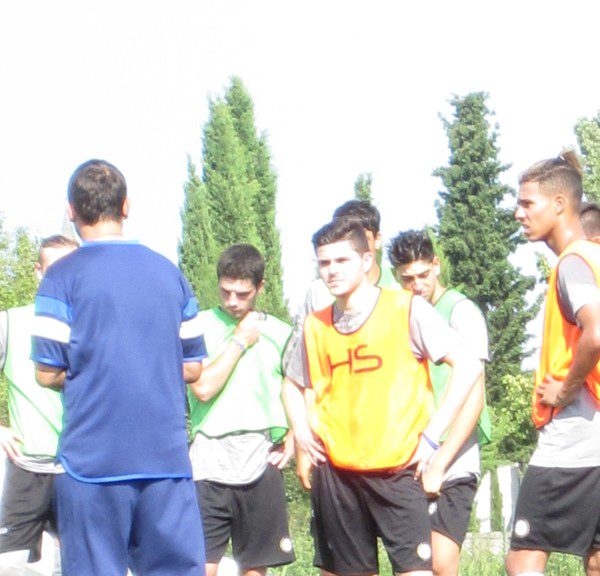 Greek Australian footballer Panos Armenakas turned 16 yesterday, and he will celebrate it with knowledge that he has already signed his first professional football contract for Serie A club Udinese in Italy.

Do you remember what you were doing for your 16th birthday? Armenakas will be in pre-season training where he will be doing training drills in the company of Italian international Antonio Di Natale, Colombian international striker Luis Muiriel and Ghanaian international Emmanuel Agyemang-Badu. Being able to train with such esteemed company is a big achievement for any player, let alone someone who is still only a teenager.

Armenakas has been playing against boys much older than him since he was in primary school. Local media knew of his prowess from the age of 11. You can find many examples of his skills on YouTube.

Armenakas, like most young footballers, had a dream to play football at the highest level possible. At 11 he was involved with the AC Milan Academy and then he spent some time in Watford in England before he was signed by Udinese.

When asked if it was his goal to play in Italy, Armenakas stated that was it was a dream from an early age.

“It was a goal I had set myself some years ago, and achieving that goal means a lot to me and the people closest to me who have believed and supported me from a very young age,” said Armenakas.

The news of Armenakas’ signing went global, yet Armenakas still remains as humble as ever.

“It’s important to keep it all in perspective and stay focused on the really important stuff like improving every day as a person and as a player. Any attention I receive in the press, on web sites etcetera, is just a bonus.”

In his time in Europe – he was signed to English club Watford in 2012 – Armenakas has already experienced a vast difference between Australian football and European football.

“Here in Europe, players like myself are constantly surrounded by great coaches, professional set ups, other young players fighting fiercely to make the same dream come true. This is what sets Europe apart from Australia and other countries.”

Born in America but raised in Sydney, Armenakas spent his formative years with Sydney Olympic. He looks back on that time fondly for giving him the basics to becoming an important part of his development.

“Sydney Olympic gave me an opportunity to play at a high Australian youth level in their Under-13s when I was only 11 and so; challenging myself with and against older players helped my development,” said Armenakas.

Like most Aussie footballers, Armenakas has dual nationality. His father is Greek Australian and his mother is American. His grandparents on his father’s side were born in Greece.

Having dual nationality meant the Sydney Olympic junior had the opportunity to play for Greece’s national youth teams. Asking Armenakas what it was like representing Greece, he was full of pride.

“Of course, it is an honour anytime you have any opportunity to play international football and the experience for sure was something I will cherish. I am also very close to my grandparents and so that was another factor that made the experience a positive one. Plus of course beating the Italians, in Italy, helped the experience,” said an elated Armenakas.

A strong support network is key to many footballers’ success and for Armenakas, his family is a rock while he’s overseas.

“I guess every footballer is different, but in my case, there is no doubt that having a strong support network (my family, close friends and key mentors) has been the key to my success so far. Not only being there during the good times, but also being there during adversity and helping me to get to that next level,” he said.

Armenakas has had some quality guidance along the way, citing his family as well as former Socceroos and AEK Athens legend Jim Patikas as his biggest career influences.

“For sure my immediate family and my coach of 10 years in Australia, Jim Patikas, have been my biggest influences in my career so far – and they both continue to play a big role in my progress.”

Every footballer started off emulating their heroes, and the Sydney born teenager is no different. It’s no surprise that being a playmaker or a traditional number 10 he has a list of past football greats that have inspired him.

“As for my game, I haven’t really modelled it on any one player, but rather, I’d like to think I have aspects in my game that have come from many different players. Ronaldinho was and still is my standout hero in football, although I have some much admiration for the likes of Rivaldo, Kaka, Zico (ex Udinese great), Antonio Di Natale (current Udinese great), Zidane, Messi, Pirlo, Ronaldo (the original) and Cristiano Ronaldo,” he says.

I asked the youngster what he does with his spare time when he’s not training or playing football, “which is never for very long” quips the youngster, and while most 16-year-olds are not signing professional contracts in Italy, Armenakas claims he’s just a normal teenager.

“Away from football I am an easygoing person. I like to be with friends, watch movies, listen to music, and play FIFA on the PlayStation. I’m just a regular 16-year-old I guess.”

Finishing, I ask Armenakas what his main motivating factor to succeed is. It’s not surprising the teenager claims the will to win as his main driving force.

“Ever since I can remember, I have always been self motivated to succeed at everything I do. Whether it be at school, in games or just any sports, I always want to win. Maybe I hate losing more than I like winning? I don’t know. All that I know is that the feeling of winning is much better than the bitter taste of losing.”