Cultural Centre opens with a bang

With a special blessing from Bishop Ezekiel, the Greek Centre for Contemporary Culture is now open 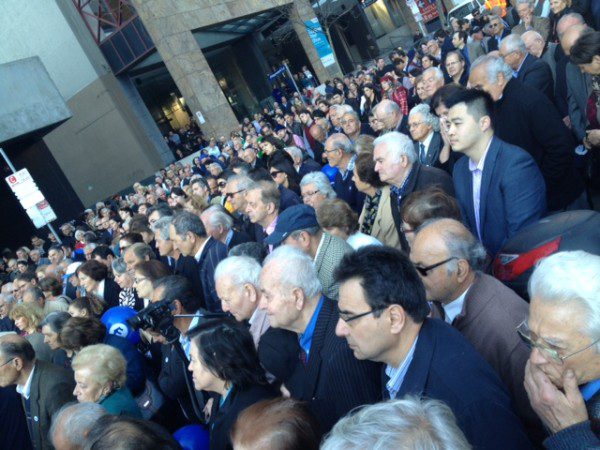 More than 2000 Greek Australians packed the Lonsdale Street Greek precinct on Sunday to see the new Greek Centre of Contemporary Culture launched with a bang.

President of the Greek Community of Melbourne and Victoria (GOCMV) Bill Papastergiadis fought back tears while addressing the crowd, speaking of a new period for the Greek Australian community.

“This is a new chapter in the renaissance of Greek Australian Victoria” he said.

“A building in which to engage and redefine our identity.”

He said the building is the largest undertaken by any Greek community of the diaspora and will act as an example of what can be achieved.

Bishop Ezekiel was on hand to bless the building, while both sides of politics showed their support, with Premier Denis Napthine and opposition leader Daniel Andrews in attendance.

Mr Andrews even tried his hand at speaking a bit of Greek to congratulate the community on this historic milestone, which was met with laughter and applause.

Greece’s Ambassador to Australia, Haris Dafaranos also relayed the Greek Government’s congratulations and said Prime Minster Antonis Samaras is very proud of the achievement of the GOCMV and of the Greek Australian community.

The 15 level building was open to all, but struggled under the crush of people. Lines heading to the lifts snaked up Lonsdale Street for hours, with people curious to see what the building has to offer.

Inside they were able to see new multi-purpose rooms, classrooms for the GOCMV language classes and rooms for future exhibitions. The pièce de résistance was the impressive rooftop space on the 13th floor.

For those not able to make it into the building, a music and dance program entertained the crowd.

It was a fitting way to open the new building, harking back to the annual Londsale Street Greek Festival.

The old white three story building is now a thing of the past. It will now forever be replaced by an impressive glass building with a sneaky Discobolus on the façade, standing tall in the heart of the Greek precinct.