With the rates of Ebola infection accelerating in Sierra Leone, Greek Australian Father Themi Adamopoulos says he won’t leave even if he contracts the virus 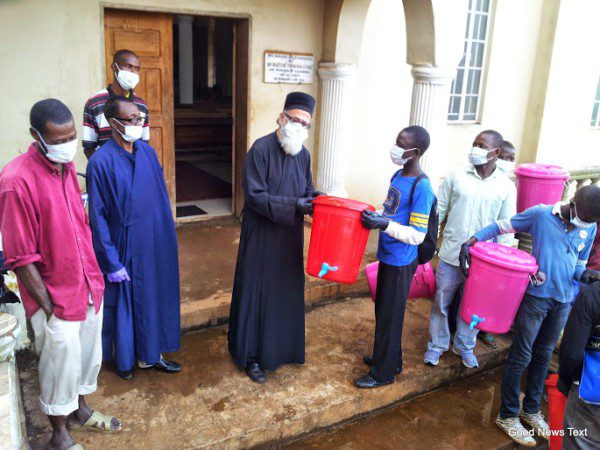 While the news of the Ebola outbreak in West African countries is making headlines around the world, and accelerating rates of the deadly virus are being recorded in Sierra Leone, Greek Orthodox priest from Melbourne, Father Themi Adamopoulos, is at ground zero, providing hands-on help to local communities.

Orthodox monk Rev. Themi, who has been heading the Orthodox mission in Sierra Leone since 2008, committed to improving the basic living conditions of the people he ministers to, is now caught up in the outbreak of a virus that has killed over 4,000 people and more than 200 health workers since its outbreak.

Father Themi says he has no plans to leave the local community, even if he contracts the lethal virus.

According to recent estimates released by the international charity organisation Save the Children, presently more than five people are being infected per hour with the Ebola virus in Sierra Leone. That means about 120 people per day are falling victim to this deadly invisible enemy and the numbers are increasing exponentially.

“If that is not grim enough, the US Centre For Disease Control and Prevention estimates that – given the present trend of infection – by January 2015 some 1,400,000 people will have been infected by the Ebola virus in Liberia, Sierra Leone and Guinea.

“Even if this is an over estimation – and the President of Liberia, Ellen Johnson Surliff thinks it is – still even a quarter of this prediction would be unprecedented in twenty first century medical history,” Father Themi wrote to Neos Kosmos.

What is ironic, Father Themi says, is that during the entire course of the ten year civil war in Sierra Leone and in Liberia around 250,000 people were killed.
The Ebola outbreak in Sierra Leone threatens to do the same in months.

“What awaits us here in Ebola ground zero is therefore a macabre massacre, which also incorporates a rising level of food shortage, hospitals devoid of staff, the decreasing possibility of receiving medical treatment for any ailment due to the health workers’ fear of Ebola. Many nurses have run away from their medical duties.

“It is like living in a horror movie – only it’s real and all around you. Bodies are being buried in mass graves, though at the moment even the Ebola grave diggers have gone on strike. Contaminated bodies cannot be buried presently, it is becoming an apocalyptic nightmare,” Father Themi explains.

With the Liberia and Sierra Leone hit hardest by Ebola, with 2458 deaths and 1183 deaths respectively in the two countries, the problem has widely been described not as a lack of funds but rather a lack of clinical expertise.

With limited number of treatment centres and insufficient beds to cope with infected patients, Father Themi agrees that what is needed on a regional level is an urgent international response.

“Consequently many people are not being treated or taken into isolation centres which means they are transmitting the infection to others in the community.

The setting up of Ebola treatment centres is therefore imperative if we are to contain the outbreak. Furthermore more medical personnel are required to be able to cope with the overwhelming number of patients. The international community has began now to respond after months of lethargy but it is not enough. It is a pity that Australia is lagging behind in this form of urgent assistance. This West African Ebola outbreak is on the verge of becoming a global threat.”

The Orthodox Christian Mission in Sierra Leone has appealed to the world community for help in continuing to take care of its own communities and the wider public in partnership with the government of Sierra Leone.

Father Themi thanked the overseas sponsors and donors who have donated a truckload of much needed anti-Ebola medical items, which were sent to a provincial town severely afflicted with Ebola.

“So far none of our Sierra Leonean flock have been infected by the Ebola virus. This due to initiatives which we have undertaken: our persistent educational programmes dealing with health, hygiene, diet and appropriate measures of prevention; our distribution of Ebola preventative items such as gloves, face masks, cholrine and alcohol based antiseptic gels to our flock as well as those in risk categories such as street beggars. Also,we received material assistance from abroad, from non-government organisations like the Greek Orthoodox Archdiocese of Australia, Paradise 4 kids Australia, Paradise 4 Kids USA, as well as from our Orthodox brothers and sisters in Greece – The Missionary Alliance of St Cosmas the Aetolian and The Fraternity of External Orthodox Missions of Thessalonica.”

“As the challenge of coping grows greater by the day so does our need for international assistance. I ask for your prayers.”

For more information about the work of Father Themi and to support his mission, visit http://paradise4kids.org/