With the association founded in Victoria only six months ago, its membership has grown from 20 to 200 members, and its branches launched in South Australia and Queensland 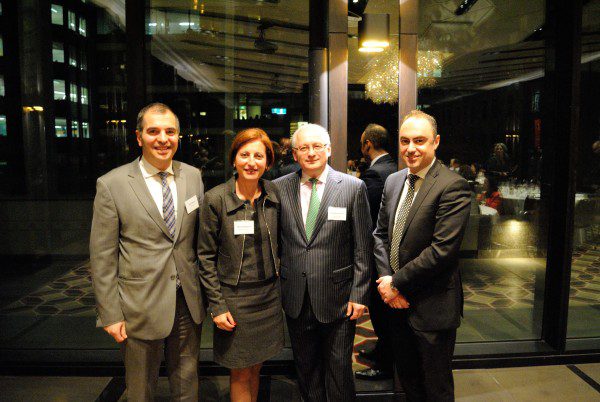 When Andrew Panna SC and Maria Barbayannis came up with the idea to create an association that would provide legal practitioners with a place to combine their practice with their cultural – Greek – background, they never dreamt that in only six months the association would grow from 20 to 200 members, and spread from its basis in Victoria to South Australia and Queensland.

Last week, the association was launched in South Australia, with His Excellency the Honourable Hieu Van Le AO accepting the invitation from the Chief Justice and a national patron of HAL, Chris Kourakis, to attend the event.

On 30 January, the association will be launched in Queensland.

“Victoria, Queensland and South Australia have shown strong interest in HAL, with senior Greek lawyers in these states driving the growth of HAL. Although we launched in Victoria we were delighted that members of the judiciary from other states accepted our invitation and came to the launch,” Mr Panna tells Neos Kosmos.

“Even more delightful was the fact they went back to their states and set about organising to launch the association. In South Australia, a senior solicitor Harry Patsouris, with support and encouragement from Chief Justice Chris Kourakis, was responsible for organising the launch. In Queensland, it is Mal Varitimos QC, with the support of Justice Anthe Philippides, the association’s patron for Queensland, who have been busy organising the upcoming January launch.”

With the number of members growing rapidly, the association has proved it has filled a gap in the Greek Australian legal community.

The successful progress of Hellenic Australian Lawyers has been a revelation for all of its members, QC Andrew Panna admits, with the growth and interest in membership of the association exceeding the expectations even of its founders.

“The association has grown from about 20 members at the time of the national launch of HAL in April to well over 200 members. Our membership continues to grow as people see that the association is progressing strongly and is providing a real focus for Hellenic Australian lawyers,” Mr Panna says.

Mr Panna sees the association as a body to enable Hellenic and Philhellenic lawyers to support each other professionally, while providing young lawyers with networking and mentoring opportunities and giving them access to senior practitioners.

“We have very senior judicial appointments such as Chief Justice Kourakis of the SA Supreme Court, and Justice Emilios Kyrou, now a Justice of the Court of Appeal of Victoria.

“That success is part of a continuing, great tradition where Hellenes have migrated to other parts of the world and have succeeded in establishing themselves in their local community in every aspect of that community’s life.”

In planning for next year, Mr Panna says, are four major functions as well as reaching out to international Hellenic lawyers connections and other similar associations.

“Once we position ourselves nationally, we intend to reach out to Hellenic lawyers overseas. At present there are some loose links with the Hellenic lawyers Association of New York and associations of lawyers in Greece.”

Six months since the association was formed, its main aims are to create opportunities for legal professionals of Hellenic and Philhellenic background, to build a national organisation that will foster the exchange of knowledge on legal topics, and to build an international presence for mutual benefit with similar organisations overseas.

For the Greek community of Australia, the benefits the existence of the association carries are many, Mr Panna says.

One of the plans HAL is working on for the near future is organising national conferences and establishing scholarships for tertiary students and legal research.

“Our members can contribute to the Australian community in ways that acknowledge the educational and other opportunities Australia has provided people of Hellenic background. In the near future we aim to create a scholarship fund that supports legal studies and legal research in Australia and overseas.”

For more information on the Hellenic Australian Lawyers Association, you can contact Andrew Panna SC on akpanna@vicbar.com.au