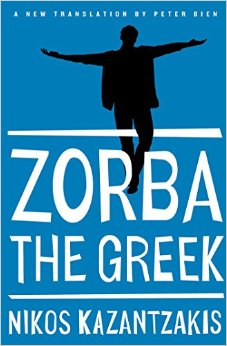 Amidst the crisis that has devastated Greece, Greek culture must celebrate an event that makes it deeply proud: the new translation by Peter Bien of Nikos Kazantzakis’ Zorba the Greek. The publication of the novel’s complete text offers the opportunity to re-assess Kazantzakis as a prose writer, revisit his work afresh and reconsider his overall achievement. The many problems with the previous translation by Carl Wildman (published in cheap pocket editions since the fifties) were becoming increasingly obvious, despite the continuing popularity of the publication.

As Roderick Beaton and Dimitris Tziovas have shown, Wildman had in many ways ‘adapted’ the text in order to make it acceptable to the reading audiences of the global Anglophone book market. Wildman obviously based his text on the French translation, omitted important passages, censored others, rephrased whole paragraphs or finally totally disregarded the ‘philosophical frame’ that keeps the narrative together.

Peter Bien’s new translation restores Kazantzakis’ authentic text to its stylistic richness, artistic unity and mythopoeic completeness. Bien has already translated other works by Kazantzakis (his translation of Report to Greco is a masterful work of linguistic force on its own merit) and he has published extensively in his oeuvre. As a systematic translator and interpreter he knows Kazantzakis’ work intimately and engages in depth with the intricacies of its structure.

The new translation offers the opportunity to revisit Kazantzakis as a prose writer, something which has been forgotten under the different rubrics of Kazantzakis the philosopher, the theologian or the ‘Greek’. Bien brings out successfully the orality of the text, its essential dialogism, which makes the text what the intention of its writer was, ‘a platonic dialogue’.

Bien worked with the nuances of a dramaturgic text, with a highly performative language and narrative pace focusing on strong theatricality, almost in the form of dramatic monologue. He has also located the precise habitus of Kazantzakis’ references; he understands his Eastern Orthodox mystical language, so successfully fused with Roman Catholic spirituality, Oriental agnosticism and transcultural philosophical conceptualisations. It is indeed the complexity of Kazantzakis’ language, its semantic density and creative appropriation of other textual formations, that make his texts significant as works of prose.
Bien’s prose captures Kazantzakis’ struggle to devise a linguistic idiom in which modernist experimentation and classical narrative realism would fuse into a textual palimpsest of sometimes conflicting verbal patterns. This was the first attempt, quite late in Kazantzakis’ life, to write a novel in Greek; a careful reading shows how hesitant and how exploratory his language is – yet it is simultaneously extremely refined, much more distilled than the idioms of contemporary writers like Fotis Kontoglou, Stratis Myrivilis or even Mihalis Karayatsis. His language in Zorba follows the pattern of his travel writings, lucid, mostly paratactic and highly emotive, spiced with sardonic humour and unexpected details which give the text its psychological complexity.

Like the later novels Christ Recrucified, Freedom and Death and The Last Temptation, Zorba is a polysemic narrative structure precisely because of its linguistic diversity; for example, really admirable is the incorporation of quotes from ancient writers into a demotic text and their constant juxtaposition with vernacular proverbs. Kazantzakis is also the master of quoting verbatim from other writers; and he employs their words in order to indicate the implied philosophical scripts that informed his own writing. Plato, Buddha, Dante, Gorky, or negatively Mallarme, and the quote from Marcus Aurelius (p. 258) become the signposts pointing towards his distinct intellectual and aesthetical horizons much more than the demonic Nietzschean character implied by the film or a conventional interpretation of his work. Indeed, through the new translation we finally see clearly the stoic, melancholic and bittersweet disposition that permeates the book, a book of ghosts and shadows and less of exuberant dances and uninhibited sexualities.

Zorba is also a self-conscious and self-reflexive work, as in the end of the book we learn that what we were reading from the beginning was how it came to be written. Gregory Jusdanis has explored the structure of Zorba as a ‘post-modernist’ artefact, and this translation makes obvious the diversity of genres employed by Kazantzakis in order to focus the attention of his readers on the process of its writing and to its contextual realities (so superbly reconstructed in the translated prologue).

The afterword by Nikki Stavrou also sheds ample light on the writing of the book and its position within the work of Kazantzakis.

The new translation brings out all these hidden subtexts which mark the beginning of the gradual consolidation of Kazantzakis’ prose style to its full development with his masterful autobiography Report to Greco, a book standing at the same level as Sartre’s Words or Nabokov’s Speak, Memory.
Peter Bien’s translation is a landmark contribution not simply to the study of Kazantzakis’ most popular book but to the better understanding of the development of literary modernism in the European periphery and the reconsiderations it inaugurated.