A book for the fans 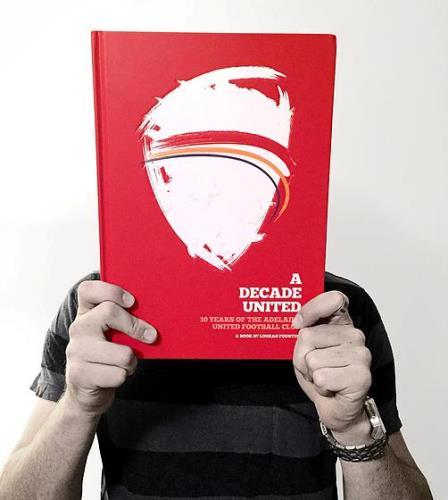 When Adelaide United formed in 2003, it was a revelation. The sport was dying, there was no unity, and many Greek Australian fans were rightfully worried.

Having built the sport from the ground up in Australia, the migrants of the 1950s and 1960s were at a loss.

“There were three weeks where Adelaide City had folded, West Adelaide was gone and there was no national representation,” ABC journalist Loukas Founten tells Neos Kosmos.

“It was a really quick change to having this brand new club playing its first match six weeks after the day it was announced.

“It was an incredible ride.”

Having lived it as a fan growing up in a Greek Australian family and having worked on the sidelines as a reporter for years, it was fitting that Founten would one day chronicle his beloved club’s story.

He’s written A Decade United: 10 Years of the Adelaide United Football Club, a book designed to paint a picture of how the A-League developed and how Adelaide United changed the sport in the state.

“The A-League is a really new competition so I thought nobody is really writing or marking the history and commemorating the things that have happened in such a short space of time,” he says.

“So the book isn’t just about Adelaide United, it talks about the changes of the whole footballing landscape, changes to the A-League, the Socceroos, the Football Federation and everything that happened that led Adelaide on its path to where it is now.”

He sought from the start to give a very honest representation of the club, and includes some things fans would like to forget.

“The grand final 6-0 loss to Melbourne Victory,” he admits is one of those memories.

“It was just a complete shemozzle. It lives in the memories of the players, the supporters, and it’s never going to leave us.

“That was a real defining moment for Adelaide United where they basically said ‘never again’ and a lot of changes were made.”

One of the more positive notes he relished chronicling was their first official match for the inaugural 2005-2006 season.

“We went from Adelaide City getting 1,500 supporters to this brand new team where we had a sellout, nearly 16,000, people were getting turned away, and this was a team that nobody knew,” he says.

The book ensures that those memories get the recognition they deserve and live on for future fans to discover.

A Decade United is now available for general release for $45. To purchase a copy, visit www.adecadeunited.com