The Retreat Hotel, rebetika, and the perpetual foreigner

In From Foreigner to Citizen 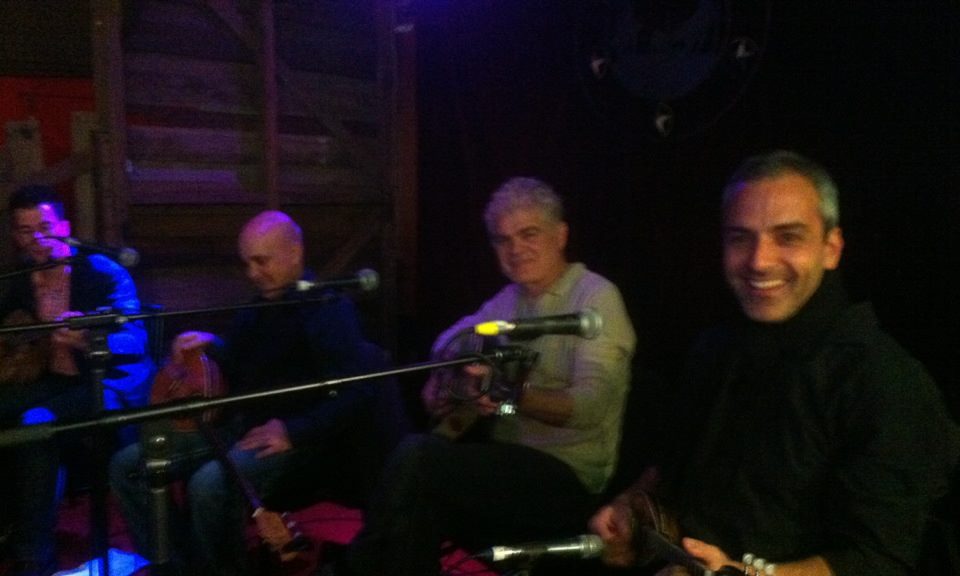 Greek Migrants and Social Change in White Australia 1897-2000, one of the most important critiques of Australian multiculturalism I have ever read, La Trobe University philosophy lecturer George Vassilacopoulos and Toula Nikolakopoulou postulate that despite the veneer of formal equality characterising race relations in this country, there lurks within the substratum a fundamental concept of the ‘perpetual foreigner’.

Whereas Australian law is founded upon respect for proprietary rights and the individual, when it comes to ‘foreigners’ these tend to be lumped together as a ‘group’ by those who obtain legitimisation of their rule and presence in this country by conferring upon such foreigners, citizenship and residency rights. Nonetheless, these foreigners are not automatically subsumed into the liberal democratic individualist paradigm. They remain a distinct ‘group’, which is expected to provide appropriate declarations and exhibitions of loyalty to the ruling culture, or face the fear of being labelled suspect. In short, while tolerated, they have not, at least up until now, really become accepted as part of the mainstream.

Such an analysis is contrary to the way we as a community generally see ourselves. After a hundred years in this country, and with Greek Australians making valuable contributions to Australian society in a diverse range of fields, we would be justified in thinking that we would have, by now, woven ourselves within the warp and the weft of the rich tapestry of cultures that comprises multicultural Australia.

A recent article published online by a leading Melbourne newspaper on 19 June 2015 has recently raised concerns that we may still have some way to go before the desired interweaving is achieved. The piece, entitled innocuously enough, ‘Hipsters join seniors on the dancefloor at Brunswick’s Greek blues night at Retreat Hotel’, seeks to describe how rebetika are being enjoyed at the Retreat Hotel in Brunswick both by Greek Australians and other Australians as well, to their mutual surprise. As such, the author begins her article thus: “Bemused Brunswick locals are jostling with elderly Greek Australians for space at their local pub, where a rebetiko revival is striking a chord.”

Immediately, a pause becomes necessary, for since the article’s publication, a large section of the internet-literate Greek Australian community, especially its second generation, has become deeply disturbed and offended by this seemingly inoffensive opening sentence. These readers pose the question: What exactly is being implied here? Are Brunswick locals, who in response to being exposed to a different culture, are described as being bemused, and elderly Greek Australians mutually exclusive? Is the author telling us that Greek Australians are not to be considered locals?

Furthermore, are we then to assume that elderly Greek Australians, who mostly arrived here in the ’60s, and large numbers of whom settled in Brunswick, are not considered or are not entitled to be considered as locals, despite living in the suburb for approximately half a century? What do these subtle indications of an Anglo-Australian journalist’s attitude suggest to us about our perceived place within the fabric of broader Australian society?

The author’s next statement provides us with clues as to her ultimate intention: “Since launching a traditional Greek blues night last month, the Retreat Hotel is seeing hundreds of unlikely punters, including some in their 70s and 80s, flock through its doors eager for sounds from their birthplace.” From this, we can glean that the author is not referring to ‘locals’ as people living in the locality of Brunswick but rather as regular patrons of their ‘local’ pub. As such, any accusations against the author for non-acceptance of resident members of the Greek Australian community within that suburb as legitimate ‘locals’ cannot be reasonably sustained.

However, her statement gives rise to other questions. In particular, Greek Australian readers ask: Why are elderly Greeks considered by the author to be ‘unlikely punters’? This is especially so given that it was that generation of Greek Australians who arrived in this country when pubs were the primary form of public meeting place, who made the most use of these, and are probably most familiar with these, more than other generations? Moreover, since the elderly Greeks in their 70s and 80s are only part of the group collectively described as ‘unlikely patrons’, who else is she implying belongs to this group? Greek Australians not in their 70s and 80s? In making such an observation, is the author in fact inadvertently betraying her own assumption that cultural background acts as a bar to enjoyment of particularly ‘Aussie’ forms of entertainment?

Most likely not. For any such inferences could arguably have said to have be created by the following comment to the author by musician and rebetika night organiser Con Kalamaras: “We are playing and looking out at the audience of Greeks all having fun, and these hipsters with Ned Kelly beards wondering what is going on … but they all end up on the dance floor, it’s awesome.” This unfortunate utterance could, if taken out of context – despite its final attempt at a cultural resolution – reinforce an artificial dichotomy between Greeks and other Australians, making such cultural exchanges as the rebetika at the Retreat Hotel seem uncanny, exotic and out of place.

Nonetheless, rather than cry racism, Greek Australian readers would do well to focus on a glaring omission in the article, which compromises its focus. In particular, either through error, choice or innocence, the author has neglected to mention that rather than being a novel phenomenon that surprises ‘locals’, rebetika have had a long and important history at the Retreat Hotel, and most importantly, that the Retreat Hotel has played an intrinsic role in the revival and widespread popularity of the rebetika genre not only among Greek Australians of Melbourne but in the mainstream as well.

For it was there that the unforgettable Apodimi Kompania and then the Anadromiki Kompania found a home many years ago, and the phenomenon of Greek Australians, the author’s ‘unlikely patrons’, flocking to the Retreat Hotel predates her article by several decades. While she was at it, she could have mentioned the fact that the Retreat Hotel was, in the past, owned by Greeks and thus the connection of rebetika and Greeks to Brunswick, and the hotel itself, is a venerable one.

Had the author been properly informed about the phenomenon of ‘Greek blues’ at the Retreat Hotel, she could have provided balance to her article by mentioning that some two decades ago, the rebetika played at the Retreat Hotel inspired Apodimi Kompamia to record a song on their ‘Melisma’ CD that cements the central importance of the Retreat Hotel and the suburb of Brunswick in their efforts to revive this musical genre – Old Brunswick Town. Her interlocutors could also have mentioned to her that since that time, rebetika have become a university-studied stalwart of the Melburnian music scene.

Instead, again via comments by contemporary rebetika virtuosos, we are led to believe that the phenomenon of rebetika at the Retreat Hotel is largely occasioned by the influx of “tens of thousands” of Greek migrants fleeing that country’s financial crisis. Yet nothing could be further from the truth. The whole genre of rebetika throughout the world has been profoundly influenced by what transpired at the Retreat Hotel those decades ago, and this is something that multicultural Australia and our community should be proud of.

On the night of 5 June, I was one of a 300-strong crowd that attended the Retreat Hotel, as the article describes. Yet rather than being an ‘unlikely patron’, I considered myself, and was considered by others who attended, as a ‘more than likely’ patron, given my extreme devotion to this type of music. While I was there I ran into Paddy Montgomery, a talented non-Greek Australian musician who has been a constant and invaluable presence on the rebetika scene for many years. He greeted me in Greek.

Returning to the place where I spent many hours admiring the virtuosity of the late lamented Hector Cosmas and the mysterious and subversive musical stylings of Argyris Argyropoulos, I, like all the other patrons, most of whom were between 25 to 60 in age, were profoundly moved, not only by the brilliance of the musicians themselves, but also at witnessing not a novelty but rather, the return of Melburnian rebetika to their spiritual home.

The fact that this eluded the author of the article possibly acts as a poetic metaphor of the way in which Greek Australian musical and cultural memory has retreated from the Retreat Hotel in recent years. This is why the resuscitation of this most venerable tradition by Con Kalamaras, Achilles Yiangoulli, Nick Koutsaliotis and Ilias Chatziemmanouil at the Retreat Hotel is so timely.