“No language is rude that can boast polite writers”- Aubrey Beardsley 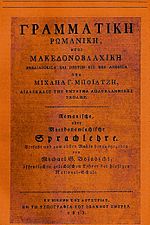 To no small degree, I owe my existence to my late grandmother’s knowledge of the Vlach tongue and in particular, its southern, Pindean dialect. Once she acquired this facility, it exposed her to a concatenation of circumstances that led ultimately, I would argue, to my corporeal manifestation upon this earth.

As was the custom in large families prior to the Second World War, my grandmother was apprenticed as a young girl to a Vlach woman, whose name is unknown but who has always been referred to in family lore ominously as “η Βλάχα”. Passing by my grandmother’s village by the lake at Ioannina, the said Vlach woman happened to notice my grandmother, a young child, sweeping the yard and singing as she did so. She took a liking to her and offered to cover her board and expenses, if she could assist her on her transhumant wanderings, high in the Pindus mountains, for six months. My great-grandfather, without consulting his wife of course, was convinced that such an arrangement would be beneficial for all concerned and agreed. The deal was struck and my grandmother was led away to the Samarina valley, still a heartland of Vlach speech and culture today.

At the conclusion of the six-month period agreed upon, my grandmother was still accompanying the Vlach woman on the wanderings of her flock all over Epirus and as far as Grevena. It transpired that the Vlach woman had no intentions of ever returning my grandmother to her family. Considering that she was hers for eternity and coming to care for her greatly, she invested in her education, sending her to the various Vlach language schools that were in operation for the Vlach minority throughout Epirus during the period between the World Wars. Consequently, my grandmother not only became fluent in Vlach, but also proficient in writing and reading the Roman alphabet in which the Vlach language is written. Alone of all her siblings, she retained this facility, astounding me in her seventies by her capacity to read and pronounce English and French shop signs, on the streets of Athens, all the while experiencing great difficulties in reading Greek.
After the transpiration of two years, the Vlach woman was sufficiently self-confident as to hazard a trip down to Ioannina, expecting that my grandmother’s family had, by then, come to terms with her loss. Sadly for her, my grandmother was spotted by chance sitting in the window of a guest-house by her uncle. Returning to the village with all haste and urgency, he informed my great-grandmother of her daughter’s whereabouts, whereupon she, with the assistance of her brothers-in-law, hatched a daring and intricate plan for my grandmother’s rescue, including subterfuge, disguises and the blocking off of possible escape routes. The operation to snatch my grandmother from inside the window was successful and she was soon reunited with her family, my formidable great-grandmother ably being able to fend off the protestations of the Vlach woman, who had the temerity to turn up at her doorstep, demanding that HER daughter be returned to her.

Save that my grandmother now displayed the propensity to sing in an unknown language, family life returned to normal. Just as she was enrolled in the village school and began to engage herself in the difficult task of deciphering the Greek alphabet, Greece was invaded and school was suspended. Then, tragically, my great-grandfather was killed, leaving my grandmother and her five other siblings orphaned. Only three of those other siblings would survive the war.

When the guerillas of the Democratic Army came to the village, after the war, the first thing they did was to billet soldiers in my grandmother’s house. Soon after, they rounded up all of the village children. These were to be relocated north, to some countries with unfamiliar names, where apparently, they would be educated, fed and returned to Greece after the ‘final victory’. My grandmother had advance knowledge of this, as the soldiers billeted in her home were Vlachs from Grevena and she overheard them discuss their orders in their language, thinking that they would not be understood. Though my great-grandmother attempted to hide her, my grandmother was found and made to join the ranks of her peers, embarking upon a perilous road towards an uncertain destination.

It was my grandmother’s sunny disposition, her propensity to endear herself to everyone who met her, along with her facility in the Vlach tongue that occasioned her escape. She would sing Vlach songs to the guerillas, chat to them in their own language, and it was one of those guerillas who approached her one night and said in Vlach: “Child, you are too young to be separated from your loved ones. Tomorrow, we are going to cross a ravine. When I give the signal, pretend to faint. I’ll do the rest.” The very next day, at a particularly step bend in the road, the signal was given. My grandmother collapsed on the side of the road, and the guerilla rolled her gently into the ravine below, stating: “This one is dead. It must have been exhaustion.” Many days later, my grandmother, emaciated and starving, returned to her village and knocked on the door of her house. When my great-grandmother opened it and saw her daughter standing there, both of them fainted simultaneously.

The billeting policy of the army of the Kingdom of Greece seems to have been consistent with that of the Democratic Army, for at the conclusion of the Civil War, soldiers completing their military service were billeted in the homes of my grandmother’s village. As chance would have it, the two soldiers billeted in my grandmother’s home were Vlachs, and as my grandmother moved about the house, intent upon completing her household chores, one of them would appraise her with the eye of a connoisseur. Were he of a Shakespearean mould, he would have been inclined to declaim: “There’s language in her eye, her cheek, her lip, Nay, her foot speaks…” Instead, being of an unsentimental and un-poetic disposition, he resigned himself to making approving remarks about her dimensions to his colleague in their own tongue, believing that they would not be understood and thus not transgress the unspoken laws of hospitality.

My grandmother, who had, unbeknownst to him, taken a shine to her Vlach fan, soon disabused him of his misapprehension. Thus, when one day, he deigned to wax lyrically to his friend about the curve of my grandmother’s nose in her presence, she turned around abruptly and stated in Vlach: “I hope you know that I understand every single word you are saying. How rude. I’m going to tell my mother.” What ensued from my grandfather’s spluttering attempts at excusing himself, was a marriage proposal, the only honourable thing a Greek chap could do after spending months ogling the daughter of the house. It was her knowledge of the Vlach tongue that ensured my grandmother was not only in the village at this time and not somewhere behind the Iron Curtain but also, that she was able to break the ice and obtain the object of her affection.

After moving to Athens in the ’50s, my grandmother never spoke Vlach ever again. At a time when village yokels and their obscure accents were openly sneered at in the capital, my grandmother quickly assimilated the airs and patois of the true Athenian and the whole story was forgotten and never related to her children. It was only when my great-grandmother returned with me to Greece for a granddaughter’s wedding decades later and she apprehended my grandmother seated in a corner, conversing in Vlach to the prospective gambro, that my great-grandmother sighed: “Oh God, not another one. What are we, a hostel for Vlachs?” and the entire story of my grandmother’s relationship with the Vlach tongue was finally related in full. Though the meaning of its strange cadences continue to elude me, an object of great regret, as I, after Bertrand Russell, deeply believe that the obstinate addiction to ordinary language in our private thoughts is one of the main obstacles of progress, I am grateful to the limba armãneascã, for without it, and its labyrinthine manipulations of providence, most likely I would not exist today.