On a visit to London last month, George Vardas found the British Museum’s argument for retaining its slice of Lord Elgin’s ill-gotten gains is an empty promise 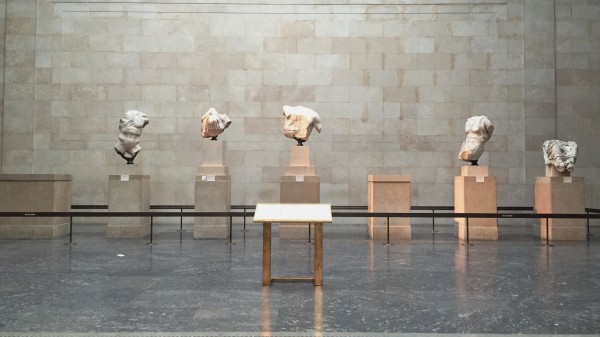 Notable by their absence: the British Museum's depleted display of the Elgin collection. Photo: George Vardas

The curator of the Greek and Roman collections at the British Museum, Ian Jenkins, once wrote that the visitor’s viewing experience of the Parthenon Sculptures in the Parthenon Gallery is enhanced by the “way they lead the eye from one to another, each figure or group of figures drawing energy from the previous and passing it on to the next”.

‘The story they speak of in the British capital is one of fragmentation, sterility and lack of any proper sense of context in either time or place

Somehow Jenkins didn’t factor in the museum’s cynical new policy of temporary loans, and the further fragmentation of the collection after the temporary loan of sculptures to another part of the museum as part of an exhibition on the Greek body in art. The ‘Defining Beauty’ exhibition closed on 5 July 2015, and in the museum’s own pamphlet it states that the missing sculptures would be returned immediately afterwards.

When I entered the British Museum on 20 July, to my chagrin the missing sculptures were … still missing. The result is a disjointed display, replete with empty plinths, missing marbles and photographic impressions of what could have been.

The British Museum’s claim that the Parthenon Sculptures tell a “different narrative” in London compared with the remaining sculptures on the Acropolis has taken on a new meaning. The story they speak of in the British capital is one of fragmentation, sterility and lack of any proper sense of context in either time or place for the viewer to properly understand these wonders from the age of Classical Greece.

The ‘Defining Beauty’ exhibition was staged ostensibly to show off the evolution of the human body through the creative minds and hands of the ancient Greeks and as subsequently interpreted by artists who followed them.

But as with the temporary loan of the river god Illisos sculpture to the Hermitage Museum in Russia, it is hard not to be cynical and see this latest ‘exhibition’ as a mere extension of the British Museum’s continuing quest to demonstrate that their collection of sculptures stands apart from the marbles in Athens.

To put it bluntly, the Elgin collection of Parthenon Sculptures is being used as nothing more than art objects which can be broken up and displayed on their own or in general exhibitions, shows that have no bearing or connection with the Parthenon.

The museum’s outgoing director, Neil MacGregor, has boasted that the museum has plans to make further loans of parts of its collection of sculptures. So the fragmented and disparate presentation of the marbles will persist until the day they are reunited in Athens in the Acropolis Museum, where they belong.

* George Vardas is vice president of Australians for the Return of the Parthenon Sculptures.