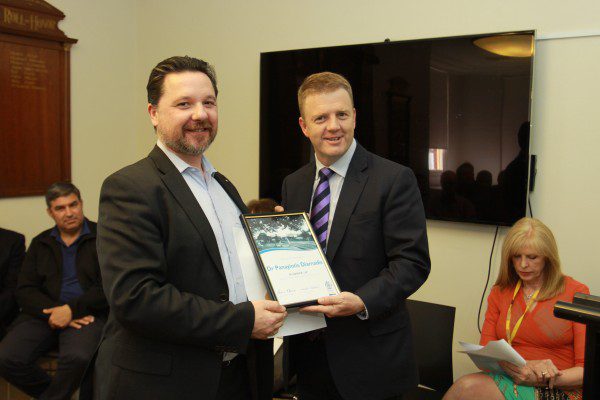 Dr Panayiotis Diamadis (L) receiving his award from the mayor of the City of Rockdale, Cr Shane O'Brien.

“Hellenism was the first civilisation which created monuments specifically dedicated to men who had fallen on the field of battle in defence of their homelands,” said Diamadis, who lectures at the University of Technology Sydney.

As the genocide scholar highlights in his study, various sites across Rockdale, including churches, clubs, gardens and sporting facilities, have been dedicated in whole or in part to the memory of locals who served in the armed forces of Australia and abroad. One example he cites is the Tempe War Memorial, inaugurated in September 1918 with donations from workers of the Tramways Depot.

“The story of the Tempe Depot War Memorial demonstrates Hellenism continues to be the enduring source of inspiration 25 centuries after the creation of the first war memorial,” he said.

Dr Garry Darby, with his entry ‘Rocky Point Road: the first 50 years’, took out first prize in the competition.