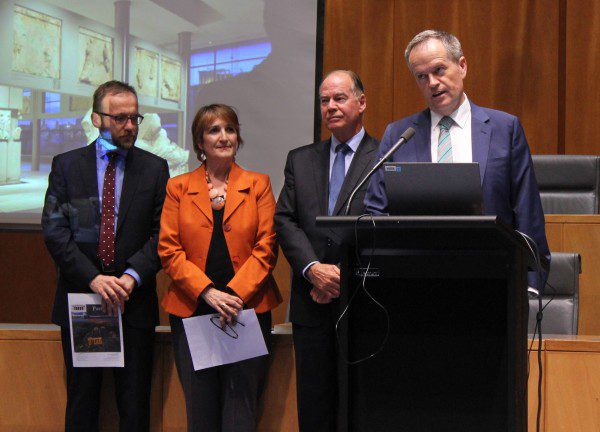 Australian Opposition Leader Bill Shorten joined more than 60 MPs, dignitaries, and leaders of the NSW and ACT Hellenic communities on Wednesday at the launch of the Parliamentary Friends of the Parthenon group.

The group, established to encourage the Australian Government to back international efforts for the reunification of the Parthenon Marbles, was convened by Victorian MP Maria Vamvakinou, with the Greens’ Adam Bandt and Nick Xenophon as co-convenors.

To rapturous applause, Mr Shorten began his speech by saying that after 200 years it was “time for the marbles to go home” and that Australia, with its “long and healthy links to both Greece and Britain” was ideally placed to lend its voice to the campaign.

“From Lord Elgin, Neil Kinnock and Tony Blair, it’s fair to say the Brits have been resolute, but it would not be wise to underestimate the Philhellenes around the world, and their collective call for the sculptures to be repatriated,” he said.

The Labour leader added that he hoped the Parliamentary Friends group would strengthen the ongoing campaign to bring together the sculptures and see them returned to their place of origin and installed in the Acropolis Museum.

With leaders of the Australian Hellenic Council and a host of parliamentary heavyweights in the audience, including Phillip Ruddock, Tony Burke, and Mark Dreyfus, along with former speaker Anna Burke, Greece’s ambassador to Australia, Mr Haris Dafaranos, said he felt “humbled to be in the cradle of Australian democracy to salute efforts to re-engage Australia” on the issue.

“It is very important to keep up the interest of the Australian public on the sculptures issue, if we are able to keep alight this torch of philhellenism in Australia this is a great encouragement for the people of Greece.”

Former ABC managing director Mr David Hill, Chairman of the International Association for the Return of the Parthenon Sculptures, said the formation of the Parliamentary Friends group was a vital landmark for the global campaign.

“There aren’t many wrongs in the world that you can put right, but this is one of them, and with your support we’ll one day see justice done,” he said.

Elly Symons, vice president of Australians for the Return of the Parthenon Sculptures, whose efforts were instrumental to the formation of the group, told Neos Kosmos the initiative was key to enhancing Australia’s role as an advocate for the Marbles’ reunification.

“Australians recognise the importance of honourable repatriation of cultural heritage to its rightful owners and its great to have this formally acknowledged by our politicians,” she said.

“The defacing of the Parthenon 200 years ago is no different to the bombing of the Bamiyan Buddhas by the Taliban and the destruction of Palmyra by ISIS – all go by the name of ‘cultural heritage destruction’.

Ms Symons said that Australia’s “strong sense of justice and proud philhellenic tradition” and the new bi-partisan Parliamentary Friends group made the country a potent international voice on the Marbles’ repatriation.