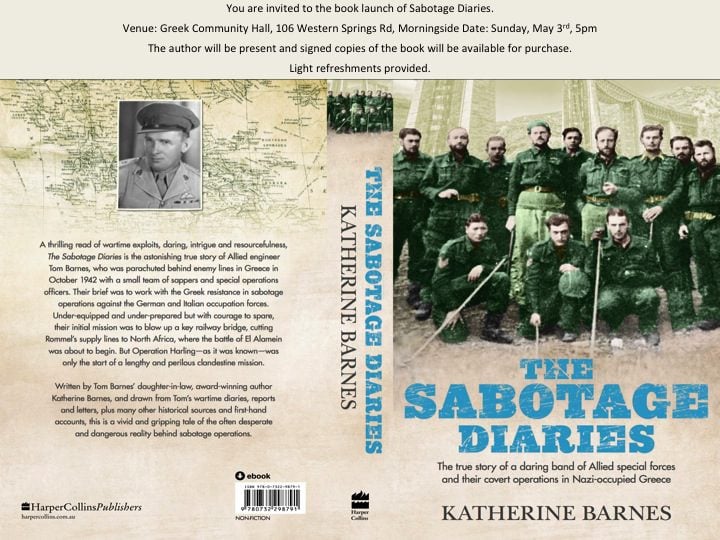 “Memory is that diary which we all carry with us.”
Oscar Wilde

This multifaceted quality of Katherine Barnes’ book, based on the wartime diaries of her father-in-law, Tom Barnes, is one of the most engaging aspects of her work. While the story literally tells itself, given the deep involvement of Tom Barnes in the Greek resistance, Katherine Barnes has conducted extensive research into occupied Greece in order to add context and flesh out a historical background that springs alive from the words of the page. In doing so, her words are imbued with a cinematic quality, a vividness that is truly startling in its ability to ensnare readers and ultimately involve them intimately in the heroic and often harrowing exploits of the brave and doughty Tom Barnes. Even when there are a few historical slip ups, such as the claim that Epirus was liberated in 1848 (it was liberated in 1913), these can be justified by the process in which the intrepid, open minded and thoroughly decent New Zealander who became an Australian engaged with the history and the people he came to love, in Greece, during his mission.

Primarily, The Sabotage Diaries recounts Tom’s exploits in Greece after he was co-opted by the British Special Operations for ‘Operation Harling’ – a mission which required him, with little training, to parachute with a small party behind enemy lines and blow up a bridge used by the Germans to supply their army in North Africa. That bridge was at Gorgopotamos and its destruction arguably formed the most important chapter in the Greek resistance movement, as well as being one of the few times in which the rival Greek leftist and rightist resistance groups were able to put aside their enormous differences and hostility towards each other and collaborate. This was in no small part due to the members of the British mission, of which Tom was one. So, to paraphrase The Canberra Times: “The Sabotage Diaries tells of the destruction of the bridge at Gorgopotamos.”

We Greeks tend to forget that broader strategic significance of that event. In any event, Katherine Barne’s narration of this key act of sabotage is as thrilling as watching the blowing up of the bridge in the film Force 10 from Navarone, which itself was inspired by the event in which Tom Barnes played such a pivotal role.

Yet in her treatment of Tom Barnes and war-ravaged Greece, Katherine Barnes is as microscopic as she is macroscopic in providing us with the bigger picture, with regards to the strategic place of Greece and its resistance movement, such as it was, within Allied plans for fighting the Second World War. She mentions but does not dwell incessantly upon the hardships faced by the Greek populace, especially those in the impoverished mountain regions of Epirus and central Greece, as a result of German and partisan brutality, juxtaposing the chaos and fear that characterised their daily lives against their propensity to place their lives in danger in order to assist and provide succour to Tom Barnes and the other members of his mission.

Remarkably, through Tom’s eyes, the Greek people are afforded immense dignity, and Katherine Barnes shies away from presenting them in a sentimentalised or orientalised fashion. Most significantly, from a Greek Australian perspective, Katherine Barnes, through Tom, picks up on one key aspect of the relationship between the Greek people and their Allies that has caused lasting trauma: though they were generous to the point of risking and losing their own lives, the Greek people expected to be materially rewarded for their sacrifices for the Allies. The fact that no such rewards were provided goes a long way in understanding Greek attitudes to the West, as well as the form post-war Greek politics took.

Ultimately, Tom ‘goes native’, always a problem for operatives working overseas. In the book, Katherine Barnes presents a British High Command that views its various smaller Allies as pawns in a broader game, to be moved around and sacrificed at will. Cleverly, she contrasts this with the unshakeable belief, from Greek political and resistance leaders down to the most insignificant peasant, of the immutable importance of Greece in Allied strategic planning. Like Tom, we marvel at the incoherency of British policy in Greece, swayed by the sympathies or biases of eloquent or well-connected officials with no real information as to the facts on the ground. Tom’s own arrival in Greece is a rude shock based on such misinformation: not only is he parachuted to the wrong area and provided insufficient equipment for his stated tasks, he also learns that the British understanding of the relative strengths and attitudes of the various Greek resistance groups are limited, to say the least. As the novel progresses, Tom subtly identifies the misconceptions in British intelligence that lead to bumbling interventions in Greece, culminating in the civil war. In Tom’s view, these are:

1. Imposing the unpopular King of Greece upon a people that did wish his return and

2. An inability to truly understand the motives and modus operandi of the ELAS resistance movement and the abrupt termination of support for that movement, leading to lasting resentment.

Owing to his posting, which placed him in close proximity with EDES resistance leader Napoleon Zervas, Tom comes to sympathise with him, though he does not shy away from recording his foibles, a love of creature comforts such as whisky to be provided by the British, compared with the mad and bad yet formidable Aris Velouhiotis, leader of ELAS’ demand for boots for his men. While Katherine Barnes’ Tom cannot believe other British agents’ intimations that Zervas may have collaborated with the Germans, details of which the author has gleaned from the wartime accounts of Chris Woodhouse, he fascinatingly observes upon seeing Velouhiotis and Zervas rolling around in hay and sharing jokes that they are in many way kindred spirits. One wonders if he knew that these two rivals were third cousins. Ultimately, upon his untimely death in a car accident, it is Zervas who sends a typically florid tribute to Tom’s wife, further cementing the bond between these two remarkable men.

Given the above context, The Sabotage Diaries is of much greater significance for Greek Australians than a mere retelling of a sideshow in the Second World War. Instead it provides an important meta-narrative for the background and causes of our own migration story, told from a unique perspective, that of a visitor, an agent of another’s vested interests, who comes to sympathise with the people he lives with. The marrying of this context with the perspective of an ‘Australian’ (it should be noted that while Tom settled in Australia, he proudly and resolutely maintain his attachment to his New Zealand origin) is original and praiseworthy. After all, it was the valorous and courteous conduct of the Australian soldiers many Greeks came into contact with that predisposed Greek migrants to choose Australia as their new home. Specifically, Sotirios Manolopoulos, in his recently published autobiography A Migrant’s Hopeful Dawn, writes about an Australian solider very similar to Tom Barnes who was so generous, and his memory proved the prime motivation for him choosing to settle in Australia.

Katherine Barnes’ The Sabotage Diaries, from the Greek Australian point of view, is thus less about annoying Rommel and rather more about two nations whose destinies and people have become intertwined as a result of the conflict that catapulted Tom Barnes into Greece seven decades ago. For anyone who seeks to understand the complexity of the British mission and the resistance movement in occupied Greece, and for anyone who wishes to understand the enduring nature of the bond between Greece and Australia, The Sabotage Diaries is a must read.

The Sabotage Diaries will be launched by Dean Kalimniou and the author at the GOCMV Building, mezzanine level at 7.00 pm on 22 October 2015.

* Dean Kalymniou is a Melbourne-based solicitor and freelance journalist.