Lemnos Gallipoli Memorial gifted to the City of Port Phillip 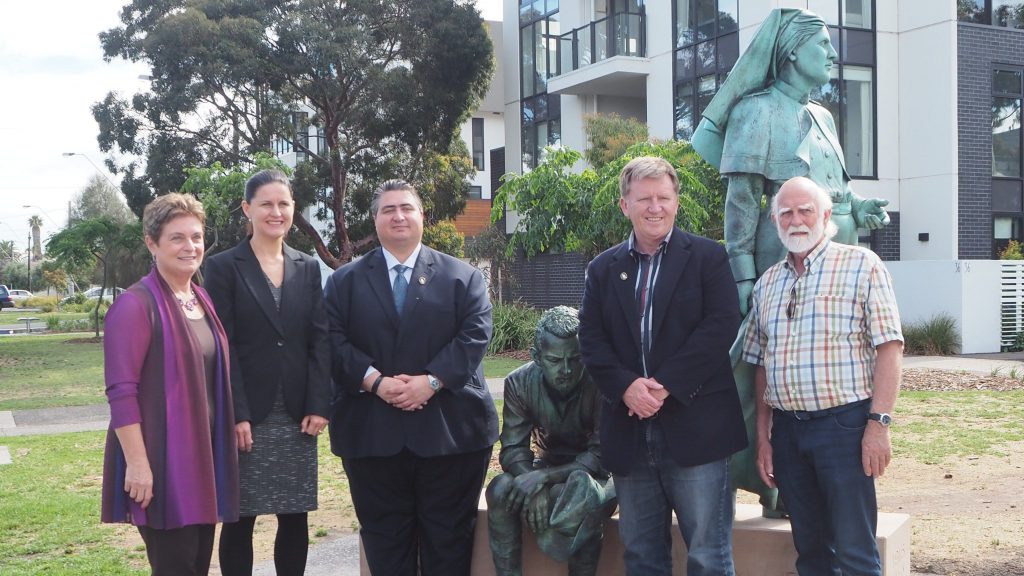 The City of Port Phillip has accepted the gift of Melbourne’s memorial to the role of Lemnos in Australia’s Anzac story.
A deed of donation has been accepted and a handover ceremony held to signify the occasion was held on Thursday 5 November 2015.
The ceremony was attended by Cr Amanda Stevens, mayor of the City of Port Philip and Mr Lee Tarlamis, president of the Lemnos Gallipoli Commemorative Committee, Mr Peter Corlett, OAM, the creator of the memorial, along with other members of the committee’s executive.
The Lemnos Gallipoli Memorial was erected by the Lemnos Gallipoli Commemorative Committee and unveiled on 8 August 2015, the centenary of the arrival of Australia’s nurses on Lemnos as part of the Gallipoli campaign.
The memorial commemorates the role of Australia’s nurses and soldiers who served on Lemnos in 1915, those who remain buried there, and the Hellenic community who supported them. It is located at Foote Street Reserve in Albert Park.
“The deed ensures that the memorial will be looked after for the benefit of future generations and will be the site of commemorative services in the future. It is a great moment for our memorial to be in the safe custody of the City of Port Philip,” Mr Tarlamis said.
Cr Amanda Stevens said that the memorial was a great addition to Port Phillip’s commemorative memorials and the area’s role in Lemnos, ANZAC, and as the arrival point of many new migrants to Australia from Greece.
“It is a pleasure and an honour for me to formally accept this gift from the Lemnos Gallipoli Commemorative Committee on behalf of the people of Port Philip,” she said.
The Lemnos Gallipoli Memorial is located at Foote Street Reserve, Albert Park.