Novel approach used by doctors to rid girl of tumour 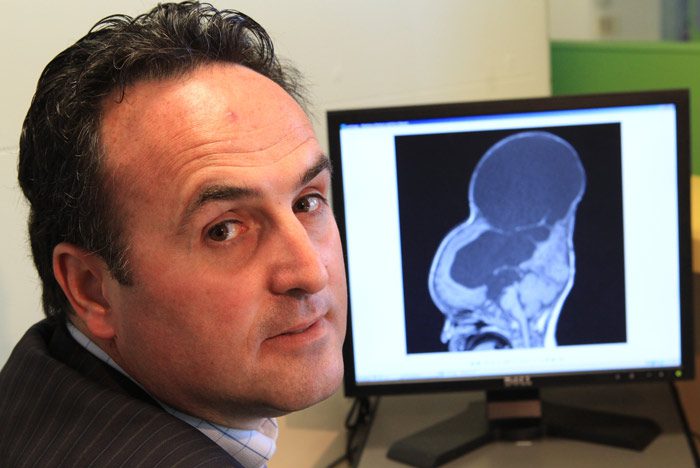 A 12-year-old girl facing a life-threatening skull tumour led doctors at the Monash Children’s Hospital to employ leading-edge techniques to save her life.
Mackenzie Fort was diagnosed with a epithelioid ­hemangioendothelioma (a rare malignant tumour) after experiencing headaches. Scans discovered a tumour so large it was putting pressure on her skull.
However, doctors were faced with a harrowing situation, with the tumour close to vital blood vessels that could have resulted in a fatal haemorrhage if interfered with.
According to the lead surgeon on Mackenzie’s case, neurosurgeon Chris Xenos, epithelioid hemangioendothelioma tumours are uncommon, especially the size found in her head.
“This tumour is huge, it is the biggest skull tumour I have done, but it is also a rare type of tumour that we don’t see often,” he said.
“At a certain point, the brain starts suffering and I suspect the headaches were the start of that, and that causes unwellness, but it can also cause certain deficits such as paralysis. If it continued to increase in size, it would have put her life at risk.”
This prompted Mr Xenos and his team to try a ground-breaking approach, opting to block the blood cells around the tumour by injecting glue into the surrounding area, which they monitored for a week to ensure she did not experience a stroke.
“With this pre-op embolisation, the advantage we have is the conditions are in my favour and I can chip away and spend all day operating knowing I am not going to cause too much blood loss and can get the job done,” Mr Xenos said.
The surgery was deemed a success, with Mackenzie making a full recovery and keen to join her friends again on the sporting field.