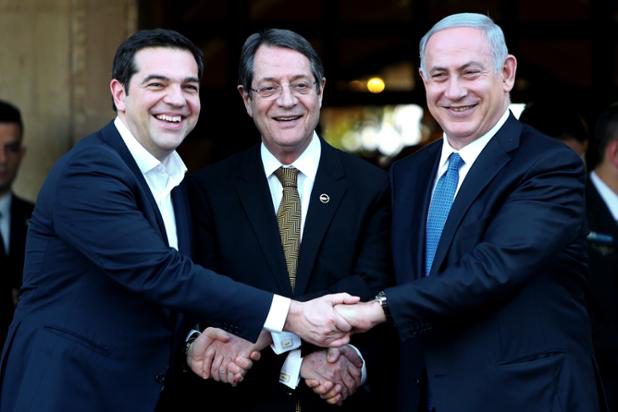 “The last time Greeks, Cypriots and Jews sat around a table and talked on a common framework was 2,000 years ago,” the Israeli PM said while at the Presidential Palace in Nicosia.

The three leaders adopted a “strategic alliance” in the eastern Mediterranean, and signed a declaration spelling out the areas and affairs the countries pledge to cooperate.

“Cooperation with Israel and Cyprus was a strategic choice for Athens,” Alexis Tsipras stressed, clarifying that “this alliance is not against anyone else”.
His statement was later seconded by Anastasiades and Netanyahu, in an apparent nod to Turkey, adding that further financial support and economic development would help alleviate the migration crisis.

In the tripartite declaration it is stressed that this new axis is not exclusive, inviting other states with similar goals into the alliance with an aim to aid the plagued by conflict area.

“Our partnership is not exclusive in design or nature, and we are ready to welcome other like-minded actors to join our efforts to promote coordination and cooperation, as well as regional peace and stability. Our states share the same values as well as the conviction that in order to effectively counter multiple challenges confronting us on a local, regional and international level, we must work collectively,” the three leaders concurred in a joint statement.

As reported by the AP, the countries pledged to work together to seize opportunities emerging from newly-found offshore gas reserves in the eastern Mediterranean.

While the cooperation has formed over gas reserves in the wider region, water resources and tourism were also discusses and will be high on the agenda, according to Cypriot government spokesman Nikos Christodoulides.

A trilateral committee will study and supervise the building of the pipeline between Israel and Cyprus and on to Greece for gas exports to Europe and the possibility of an underwater cable which will connect the electricity grids of the three countries.

The next summit will take place in the second half of this year.