Rewriting the past through fantasy 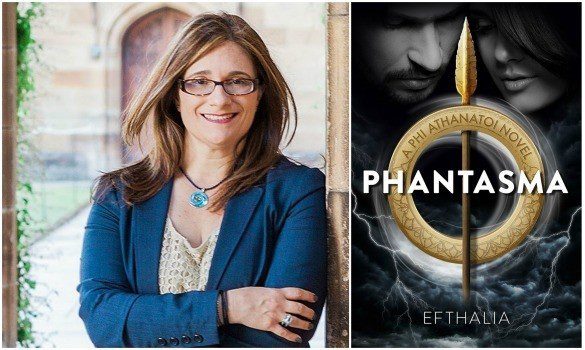 Amid the hustle and bustle of life in Sydney, writing has become a form of escapism for Efthalia, and is a process which can be likened to euphoria.

If you understand the past, you are better able to write

“It’s a euphoric feeling when you are writing and in your zone,” she says, evidenced through her commitment to write the ten-part series Phi Athanatoi, the first of which was recently released.

Her debut novel Phantasma is an urban fantasy that follows the story of Carissa Alkippes, the daughter of a god. Then there’s Xen Lyson, who heads the Phi Athanatoi, a group of immortals who have been protecting man for more than 2,000 years from the kakodiamones (demons) who want nothing more than to feast on humanity.

But the thing is, Alkippes doesn’t exactly know she is the daughter of a god. A police officer, she’s by no means lived a sheltered life, but nothing could have prepared her for the horror of the world she has been plunged into.

Soon she comes face to face with Xen, and during a skirmish with the demons becomes a pawn in a deadly game of a demi-god who seeks godly power.

With crime fiction her “first true love”, the writer always thought she would venture down that path, but through fantasy she managed to find a sense of freedom, a genre through which she could express herself without boundaries.

While the book is set in modern times, it is inspired by and entwined with Greek mythology, culture and draws from Homeric themes, such as the revenge cycle. All characters carry a name of Greek origin, and even some of the text has been kept in Greek, with a glossary to easily cross-reference.

“When I was doing my MA (in Writing), a lot of people kept saying ‘write what you know, write what you know’. So being Greek, we know a lot about our cultural heritage, and mythology has always been a fascination of mine, so it just felt natural that that would be what I’d write,” Efthalia tells Neos Kosmos.

The now 47-year-old completed her MA in 2010 by correspondence through Melbourne’s Swinburne University; no easy feat for a busy wife and mother of two.

“It wasn’t easy doing it [MA] from home, but strangely enough I had that self-motivation; it was one of those moments where everything just worked out well,” she recalls.

For Efthalia, writing is actually the easiest part of the process, and something she has enjoyed from a young age, fostered through the stories told to her as a child by her Greek-born mother.

“I would say writing is probably the easiest part of the process, because you can just disappear in your own world.”

While she managed to complete the first draft of 50,000 words in just 30 days, the rest of the process from draft to shelf took her a total of four years.

“I think the hardest part is probably the editing, polishing, layering and getting it where it needs to be so that it is readable; you need to have all the elements to make it work. The editing gets to the point where you just want to throw it in the BBQ – ‘I’ve had a enough, let’s use it for the next lamb roast!’,” she says with a laugh.

“A lot of other genres suffered in the process,” she recalls.
“I had a rejection letter saying that ‘when we spoke to you, yes, that genre was moving, but at the moment it’s not’, and they weren’t willing to take me on.”

But after pitching to publishing houses both Down Under and abroad, she thanks an interesting plot line, perseverance and timing for her breakthrough.

“A lot of the time if you are writing something that’s a little bit different and doesn’t fit necessarily in one basket, it’s sometimes a little bit harder to place. But there has been a bit of a shake-up within the genre, where they want to start seeing something new, something different, something fresh. So there’s a lot of talk that the fantasy genre will pick up again. But that remains to be seen, like all things.”

Aside from developing her series, the writer is currently pursuing Classics and Archaeology at Sydney University, which she describes as “fuel for the fire”.

“It’s something that interests me and because I do draw from mythology, there’s more depth. I wanted to have that kind of material that will help me write that era in a stronger way. If you understand the past, you are better able to write and make it more vivid for the reader,” Efthalia explains.

Currently writing the second book in the series, what else is on the horizon?

“Oh, there will be other books,” she hints. “But that’s later down the track.”

Phantasma is now available in paperback or as an e-book through Amazon, Barns and Noble and iBooks AU.