Bill Papastergiadis: “I pressed the Greek ministers to resolve the issue of taxation” 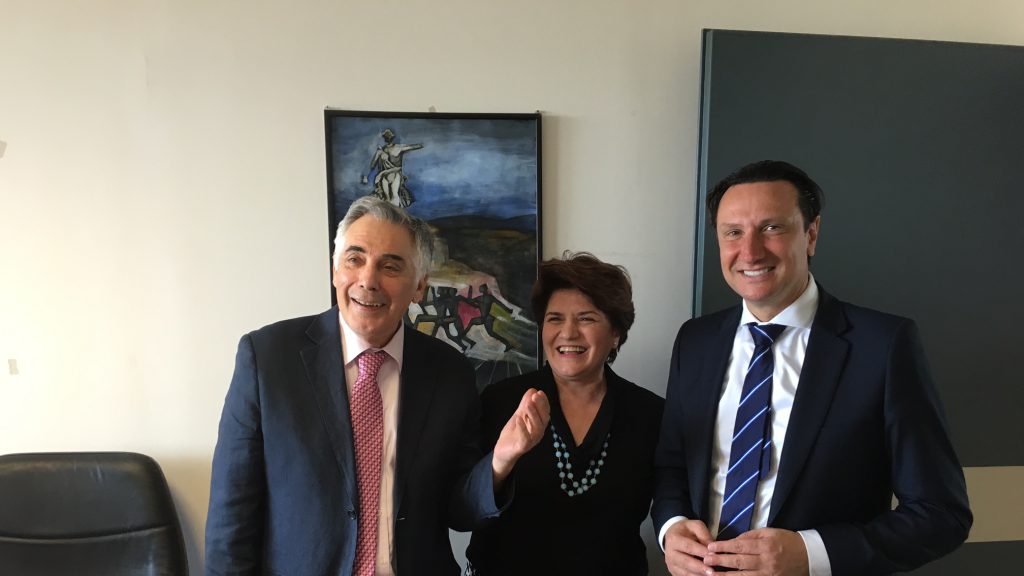 Many Greek Australians fly to the motherland in July, trading the Australian wintertime for some days under the much-lauded Greek sun. Few of them try to combine island-hopping with business meetings but this year, one worked really hard. Bill Papastergiadis, President of the Greek Community of Melbourne and Victoria, took some time off from his vacation and met with a series of Greek officials: ministers, members of parliament, and stakeholders in an effort to push forward some of the pressing issues of the Community. He even spoke to the Parliament, presenting the work of the GCMV to a room full of parliamentarians. In an interview with Neos Kosmos the President of the GCMV discusses the outcome of these meetings.

How did you get to set up these meetings?

The Greek Community took a proactive approach towards its dealings with the Greek government; some three months ago, along with the Australian Ambassador to Greece, we organised a luncheon, whereby senior government ministers and senior bureaucrats, as well as key industry representatives would be present so we could further discuss the relations between Greece and Australia and enhance those relationships, not only from a business perspective, but equally from a cultural and educational. Because from our angle, these are cornerstone issues and we need additional rapport and additional exchange to ensure that our culture and education product is relevant and interesting and current. So we worked with the Ambassador in formulating a list of 16 people that would be present and it was a terrific success.

Was this luncheon paid for by the Community?

Absolutely not. I have to stress that all the expenses regarding this luncheon as well as any other meeting that I had while in Greece were paid out of my pocket, and during my vacation time. No-one should assume that this was a trip paid for by the Greek Community.

What is the measure of success for such an event?

This luncheon was a success, in the sense that it led to over 15 other meetings being organised, because of the exchange of information that took place. One of the officials present at the luncheon was Alexandros Triantafillidis, who is a Syriza MP for Thessaloniki and the chairman of the Hellenic Parliament’s Committee for the Greek Diaspora. He came and said: “We were largely unaware of the actions and the activities of the Greek Community of Melbourne, we’re astounded at its product and its commitment and its effort and we need to share it with the Parliament”. So, he invited me to address the Parliament and I gave a five-minute presentation, after which I was again approached by MPs from Nea Dimokratia, Syriza, and the other parties, who largely articulated that they were unaware of our activities. They were highly impressed both by the Greek Centre and the level of relationship that the Community has with the government, the broader community, and the educational sphere. From that we agreed to organise a number of meetings with key government ministers to deal with and discuss some of the key issues in front of us.

Which cabinet members did you meet?

The first meeting was with Theodosis Pelegrinis, the Deputy Minister of Education, Research, and Religious Affairs (and former Rector of the University of Athens). I put to him four issues: the exchange program for students from year six to year twelve, another program for the placement of children from Australia to summer camps in Greece (including educational field trips), the further strengthening of the program of teachers from Greece appointed to Australia, and programs to re-educate our own teachers to ensure that their output is appropriate and current. He was very enthusiastic and assured me that the Greek government is prepared to initiate these requests.
After that I had a meeting with Panagiotis Kouroublis, the Minister for Interior Affairs and Administrative Reconstruction. We discussed the issue of voting rights for Greek Australians. I had the opportunity to express to him our position, that the right to vote should be granted, at the very least, to the thousands of migrants who came across to Australia from Greece in recent times. They should be afforded the opportunity to continue participating in Greek life, because maybe one day they will return. This is not a difficult issue, every European country affords that right, even FYROM.
But the same right should be afforded to everyone who has Greek citizenship, who holds a Greek passport. This is a matter to contemplate, because the issue of engagement becomes more pressing when someone has a vote. We see it ourselves with our own political parties in Australia. We generally have good relationships with the government and the political parties, but when elections come around, it becomes enhanced, and it becomes a time for them to reflect upon the specific outcomes that are needed and to make electoral promises. The matter of voting is something that affects the relationships of Greece with the diaspora; so far, all we have is dialogue, without action and nobody is accountable. We don’t have a member of the Parliament, or anyone, really that we can approach and say: ‘what have you done about it?’

I did have the opportunity to address this issue in the Parliament, but also to discuss it with both Kouroublis and Euklid Tsakalotos, the Finance Minister. Greece is one of the few European countries where there is not a bilateral tax agreement. In this modern age, you have people engaged in commerce who are taxed in both countries; that needs to be dealt with quickly and appropriately. We’ve had a long discussion on taxation with Tsakalotos, as it is a matter that affects the prospect of investments in Greece. We also discussed the trade relationships with China; this is an issue in which I have a lot of experience, as I deal with trade relations with China in my law firm, and he was very interested in my viewpoint. Another issue I got to discuss with both Kouroublis and Tsakalotos was the prospect of relocating the Greek Consulate to the Greek Centre, which would make much financial sense, it would save a lot of money for the Greek government.

Were they open to these issues?

They were all very enthusiastic and very interested in our story. What these meetings did reveal, though, is that the relationship between Greece and our community is not as deep and strong as it should be.

Do you have a time frame for the implementation of those agreements?

I’m going back there again in late September and continue to press the points, in order to get some concrete responses and actions. But within the next twelve months we’re going to be in a position to show progress, at least as far as the educational programs are concerned.