Hellenic Museum amongst the best

The invitation to take part in the international conference is the recognition of hard work, CEO John Tatoulis says 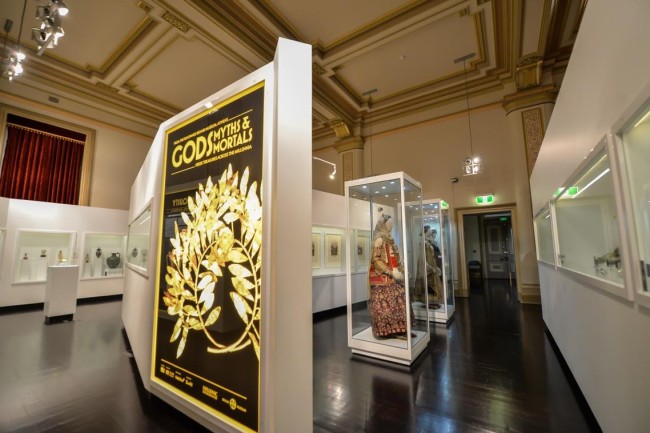 Alongside 20 other award- winning museums from around the world, Melbourne’s Hellenic Museum has been chosen to take part in the acclaimed international conference in Dubrovnik, Croatia, this September.

The Hellenic Museum received an official invitation to take part in The Best in Heritage conference, an international, annual survey of award-winning museum, heritage and conservation projects, which has been running for the last 15 years.

Projects from around the world, proclaimed the best in the previous year on national or international level, are invited to the conference to present their success stories.

From 22 to 24 of September, CEO John Tatoulis will travel to Croatia to tell the story of the Hellenic Museum. Humbled, he tells Neos Kosmos the invitation to present among the leaders in their field came as a complete surprise.

The invitation comes one year after the Hellenic Museum won the Victorian Museum Award 2015 for the Best Exhibition in the category of medium-size museums.

“The Best in Heritage was specifically established to introduce projects of significance from heritage and cultural organisations around the world to peers,” says Mr Tatoulis.

“For the Hellenic Museum, this is a recognition of the hard work that has been put into it. Particularly over the last few years, the museum has taken a slightly different direction, it has been quite adventurous in the way in which it has re-established and positioned itself so that it can grow into the future,” he continues.

In Dubrovnik, the Hellenic Museum will present its work and cultural initiatives, including the relationship with Athens’ Benaki Museum and the awarded exhibition ‘Gods, Myths and Mortals’.

The exhibition, Mr Tatoulis says, was integral to the museum’s recent successes.

Having initiated the partnership with Benaki Museum, Mr Tatoulis says the exhibition would never have happened if it wasn’t for the good faith of an adventurous board of directors, and the financial support from major benefactors and Greek and Victorian government.

“Everyone has taken a big leap of faith in terms of programming and the initiatives that have been taken. Also we needed the support and acknowledgment of the government – the Greek government were guarded but also adventurous, as something like this has never happened before,” Mr Tatoulis says.

The exhibition ‘Gods, Myths and Mortals’, which the Hellenic Museum secured from the Benaki Museum as a 10-year loan, still attracts numerous visitors.

A snapshot of Greek art over 8,000 years, the exhibition has now become a platform from which other works of art have been born. The installation ‘ONEIROI’, a new series of photographs incorporating Greek artefacts by internationally-acclaimed photographer Bill Henson, was recently commissioned as a permanent installation at the Hellenic Museum.

“We’ve had museums and galleries from as far as South Africa, New York and Chicago all requesting that the Henson collection travels there. This is a very specific concept, as the Greek government has never really allowed antiquities and treasures under its auspices to be incorporated in the new art. In my opinion, the Henson exhibition is probably one of the most culturally significant art installations in Australia in the past 12 months at least.”

It was this partnership with the Benaki Museum, Mr Tatoulis says, that put the Hellenic Museum on the wider Australian map.

“The Benaki Museum is very forward thinking and believes that museums and cultural institutions shouldn’t simply be buildings that house collections and wait for people to walk into them, but that they should take us and culture to the world in different ways.
“The combination of the relationship with the Benaki, the way we formed it and the variety of programming that the museum has engaged in, have put us on the Australian map, and now with the Henson collection – on the international map.”

From The Best in Heritage conference in Croatia, the benefits will be many, Mr Tatoulis is convinced.

“To be recognised by your international peers is fulfilling. We’ve already learned a lot from other ideas that will be presented there, and we’ll make great contact with other institutions – we have already started engaging with some of the other participating museums.
“It will also allow the international museums and cultural institutions community to see the work that the small but dynamic museum – that is punching way above its weight – is doing here in Australia.
“We’ll be presenting our roadmap to the future and it’s going to be interesting to see what feedback we get from our international peers.”