‘Athens has less freedom than Melbourne and Sydney’

Yanis Varoufakis talks to Neos Kosmos about Greece, Europe and his full-time career in politics 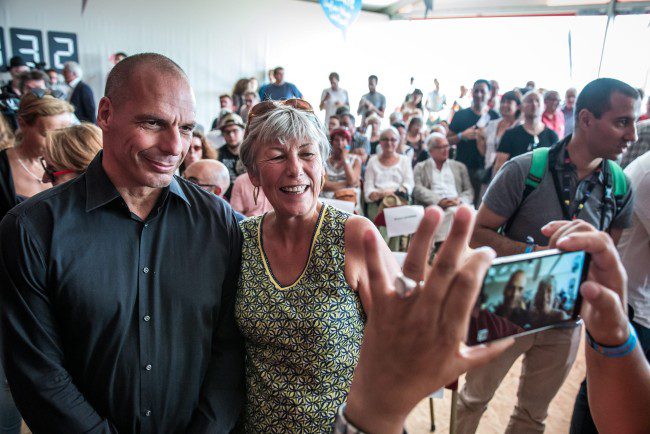 Former Greek finance minister Yanis Varoufakis (L) poses for a picture with participants as he attends a debate at the Fete de l'Humanite, in La Courneuve in France on 10 September. Photo: AAP via EPA/CHRISTOPHE PETIT TESSON.

It’s been almost a year since the much-talked-about former Greek finance minister, Yanis Varoufakis, spoke to Neos Kosmos about his short-lived tenure as minister of the “tormented” Greek Ministry of Finance, the intense, yet unsuccessful negotiations with the European Union and his tenacious refusal to succumb to the troika’s pressures.

It’s been a year since the day you announced your resignation. Were you forced to resign?
It wasn’t necessary. When I realised on the night of the referendum that the Prime Minister Alexis Tsipras had decided to invite the leaders of the defeated memorandum-friendly parties in order to co-ordinate the submission to the troika and the new memorandum, there was absolutely no further reason for me to remain in the government, although he (the prime minister) proposed it to me.

Do you regret your collaboration with the SYRIZA-ANEL government?
Obviously I do not regret it. In my six months of service I displayed the various ways that a finance minister can and should politically act within the Eurogroup, the Ecofin and inside the International Monetary Fund (IMF) corridors.

We gave Greeks and Europeans a small taste of what a national independent, yet pro-European economic policy actually is. We also restored some sense of dignity to millions of Greek and non-Greek citizens. Finally, through my resignation and those of others as well, we proved that a minister’s role does not necessarily have to corrode one’s conscience.

If you were offered a second opportunity in the same role within the Greek government, would you repeat the same practices as you did previously?
Of course not. Anyone who would have done the same thing second time around is either a fool or a fanatic. The question is whether I would do the same if I had been given the exact same information. I think the answer in this case is ‘yes’, with slight variations. The negotiating plan was correct, the approach towards the troika was also correct; where I miscalculated things was within our own ‘house’.

If I knew then what I know now in regards to our ‘team’, I would have moved towards the rupture faster and more decisively.

Some people (including from the SYRIZA party) have tried to ‘deconstruct’ you. They claim that you did not negotiate with the EuroGroup and you simply ‘bluffed’, costing Greece and its people billions of euros. How do you answer that?
History shows otherwise. I was the only one that did not bluff. I meant it when I said that I was not willing to sign a new unsustainable debt relief memorandum, unlike others who did actually bluff and who, although they had previously appeared adamant that they wouldn’t sign an agreement, nevertheless proceeded to do so as soon as things got tough.

As far as the money goes and the amount I ended up costing the Greek populace, the answer is: zero.

Numbers are clear on that point. If one compares the primary budget surplus on the day I resigned from the ministry (July 6, 2015) to the day I took over the ministry (January, 27 2015) and despite the suffocation caused by the troika in those five-and-a-half months: (1) the state treasury had more money (ie. larger primary budget surplus), (2) the overall national income was somewhat higher, and (3) the public debt remained exactly the same (without me having to borrow a single euro).

The fact that it is even conceivably possible, with this available data, to be personally accused of costing the Greek nation money is something that needs to be sought in the realms of Goebbels’ propaganda.

Was there a ‘plan B’ for Greece to return to the drachma currency? Was the prime minister fully informed of the negotiations and the ‘plan B’?
There were, as they ought to be, two plans.
One of them was designed to prevent the closure of the Greek banks by the troika, a threat that I had to face from day one with its intended purpose of us succumbing to the toxic troika policies which would confine Greece into a permanent crisis. This prevention plan was necessary for Greece to remain in the euro currency and become a viable economy within the eurozone.

The second plan (Plan X) was drafted in order to moderately prepare the country in the event that Wolfgang Schäuble would manage to persuade Angela Merkel (which he had told me he was trying to do) to activate a pre-existing European Central Bank plan (known as Plan Z) which would evict Greece from the euro currency.

I am proud of these two plans, which were most definitely prepared in full cooperation with the prime minister. In actual fact, we would be arraigned if we did not have these two plans prepared.

Are you thinking of returning to ‘active’ politics. And if you are so, in what capacity are you planning to do so?
It’s impossible to return to something you have never actually left.

In the previous election I announced that I will not run as a candidate because my wish is to work in politics in a full-time capacity. That’s exactly what I have been doing since the first day the pan-European Movement for the Democratisation of Europe, known as the DiEM25 party, was born in Berlin last February and I was one of the co-founders.

What are your thoughts on the government’s past and current actions?
The moment the government succumbed to the troika and accepted the third memorandum, it pretty much signed off its self-annulment. Under the colonial terms of the memorandum – the third one in particular – the government in Athens now has less freedom compared to a suburban council in Sydney or Melbourne.

How difficult will the forthcoming winter be from an economic perspective for Greece and the rest of Europe?
Very! The ‘de-construction’ is proceeding rapidly at all levels – government finance, banking, actual ‘real’ economy, political narrative, refugee crisis, etc.
What’s your opinion on the ‘Brexit’? How much will this exit finally influence a ‘dispassionate’ European Union and why do you believe it happened?
The Brexit is the unavoidable product of a European establishment which insists on denying the level of the crisis it has created by simply excluding the people ‘δήμο-demo’ from … democracy. The EU reaction in fact, confirms, not a composed attitude, but its insensitivity towards the cosmogonic developments which undermine it.

What’s your relationship with Australia these days?
My daughter Xenia, who lives permanently in Sydney, is the umbilical cord between me and Australia and the main reason why I visit the country as often as I do.

Besides my daughter, I have developed friendships in Australia and an emotional link with the Australian land and its people. Last but not least, I am still an honorary professor of political economy at my old university, University of Sydney, which gives me great pleasure and joy as well as many opportunities to attend interesting forums, meetings, etc.

In an April Fools’ Day article in Neos Kosmos earlier this year we wrote that you were about to become involved in Australian politics, since you are also an Australian citizen. Many of our readers believed the story. Has this thought ever crossed your mind?
Most certainly not!