A Journey Through Smyrna; two cultures, one journey

From the tender age of six, award-winning Greek American filmmaker Chrysovalantis Stamelos had his eyes set on international cinema and world music. Following a successful career as a director, writer and producer at MTV Networks (New York), the 36-year-old decided it was time to satisfy his desire to search for his roots in the historical birthplace of his ancestors − Anatolia. He picked up and moved to Turkey, the homeland of his great-grandparents.
Stamelos has just released his second multi-level production A Journey Through Smyrna, which he directed in Smyrna and which resulted in the first-ever Smyrneika concert to take place on the city’s waterfront − the Smyrna Quay.

It’s time to build a bridge between Greece and Turkey

In an interview with Neos Kosmos, the son of Greek migrant parents talks about his decision to change his life, his personal journey through Smyrna, the reasons behind his Greek ancestors’ decision to flee Anatolia and the relationship between Greece and Turkey at present. 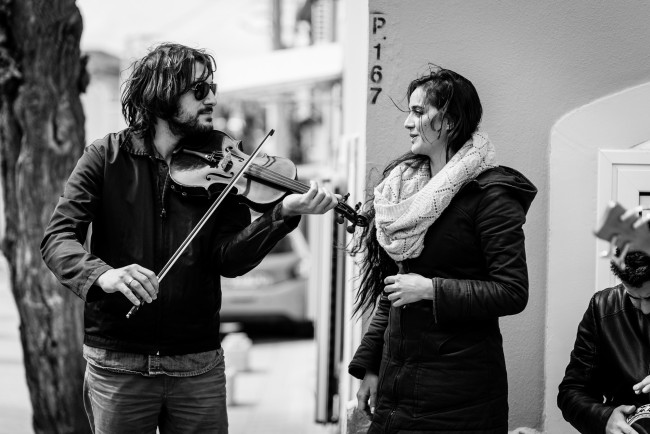 You are a by-product of Greek migration and part of the diaspora. How would you describe your family’s journey?
My parents were born and raised on the island of Evia and the city of Chalkida. When they came to the US in 1968, their original intention was to stay for only a few years and then move back to Greece. But, of course it didn’t end up that way. My father worked very hard (as Greek fathers do) in establishing a restaurant in Connecticut, and the rest was history. I was the last of three siblings born into the restaurant business and we grew up in a very fruitful upbringing in Guilford, CT. We were one of very few Greek families in the area, and as Greeks tend to do in the States, we migrated to the closest Greek Orthodox Church to connect with our Hellenic culture and strong Orthodox faith.

What prompted the desire to trace your own family tree and, to a larger extent, explore the emotional historical chapter of Smyrna?
Because I’d grown up with the historical heritage of Smyrna, as well as many other Greeks from other parts of Anatolia (particularly the Black Sea Region), I was always very interested to learn more about the events that caused my family and the Greeks as a whole to flee Anatolia.

At the same time, I am an avid reader of religions and religious history and was intrigued on how that correlated with the Ottoman Empire and the rise of nationalism. Thus, combining these two studies made me passionate to research and discover not only the history of my family, but that of the Greek populations of Anatolia and the Near East.

Was your passion for cinematography and directing an extension of your personal quest and an attempt to document all you experience? Or was this a parallel interest that has become a valuable asset? Where and when did this interest start?
I knew I wanted to make movies since I was six years old, but the kinds of stories I wanted to tell over the years have changed. By the time I was finishing college I had become very intrigued with non-fiction, in particular the historical events surrounding the Greco-Turkish war and the Catastrophe of Smyrna. After graduating, I began working in the film and TV industry, and soon found myself at MTV, where I had gained an incomparable wealth of creative and technical skills.

At the same time, I had grown an interest in my family heritage and my Anatolian roots. Thus, when the time came in 2010, I was finally able to apply those skills with my interests and start producing films in Izmir (Smyrna); the first being Hello Anatolia. So in essence, my passion for filmmaking and my ‘personal quest’ worked hand in hand. 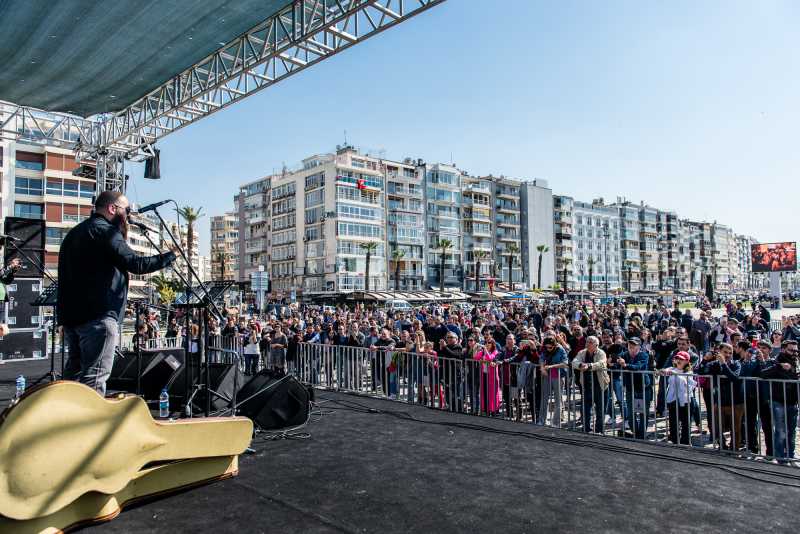 The decision to ‘migrate’ to Smyrna from the US could not have been without apprehension and family discussion. Was it a hard decision to make?
When I first announced it to my immediate family, they were very hesitant. My mother was very sad and deeply concerned, not because of any hatred or animosity towards Turks or Turkey. It was based more on economic and social reasoning. How was I going to make money? What kind of life was I going to have? How can we live so far away from each other? These were the issues because my parents, being immigrants themselves, understood the implications of leaving their birthplaces.

In the end, I knew that with whatever projects I did here in Izmir, I had to make them count and define me coming here. So far we have Hello Anatolia and A Journey Through Smyrna, so I think we are off to a good start!

A Journey Through Smyrna is your second documentary. What has been your inspiration? Are you attempting to project a different historical view, a re-interpretation of events or simply an attempt to pacify and outline the commonality of two people living in a close region?
I wouldn’t say I’m trying to do anything aside from making films for the world to see. To do so, I feel as a producer that it was wise to connect production teams from both sides of the Aegean to work together in creating a strong and sustainable film industry that could connect with international English-speaking audiences.

Izmir/Smyrna has deep meaning for me, and in that regard, I’m deeply passionate about making this city and region relevant. There is a lot of talent here and in Greece, and the complaint I repeatedly hear is that there is no avenue for creative people to produce. I wanted to change that by producing the way we are now. Within six years, I have found amazing people like my co-producer Georgia Papadopoulou, the musicians from NeaBanda and our film team in Izmir called Kare Film, headed by a wonderful producer Yusuf Saygı. Hopefully this is just the beginning.

What is the film’s projected audience?
The film targets several audiences. As a director, I wanted the film to communicate with an international audience that would be interested in the musical aspects first, and then from there, become intrigued with the history and heritage. The opposite, of course, is the Greek diaspora, particularly those with Asia Minor roots who are intrigued with the title alone.

In the middle are audiences who enjoy travel, music, and history docs. My aim as a storyteller is to bridge the gap of the Smyrna of the past that we all imagine in our heads, with present-day Izmir, to find and celebrate the things that still exist today and work with what the current conditions and moods are today.

Have there been any challenges or specific restrictions that you have encountered while filming in Turkey? How rewarding has it been?
Filming in Izmir has been rather relaxed. My co-producer Georgia Papadopoulou handled much, if not all, of the permits from the local government. Outside of that, however, we had no difficulties. People may not believe me on this, but it’s true. Filming in Izmir is much easier than filming in New York City. When we were filming on the streets, we had neighbours helping us with the musicians, giving them electricity for some of their instruments, we had a bride and groom approach us and take wedding photos together. It was definitely an adventure, and for me personally, that was more of a reward than anything.

How did you find people responded on both shores and has there been a willingness to participate?
I have to say that both sides of the Aegean have been nothing but enthusiastic about the project. We received full support from the local government here in Izmir, much of our audience that attended the concerts that were documented were from Greece. And that was and remains our aim; to bridge a divide through film and music. Now we have the chance to do that with film festivals and screenings, which we hope to see from here on out.

What do you feel is the relationship between Greeks and Turks in Turkey presently? Is it somewhat strained and ‘policed’ as a consequence of recent events?
A lot has changed over the years I have lived here. The relationship I see today is not what it once was even six years ago. When I first came to Izmir it was pretty void of any cultural exchanges outside the typical political arena. Today, tourism between both sides is at its highest, many Greek events have taken place in Izmir as well as Turkish performers going to Greece.

However, putting that aside even, there are so many Turks that are deeply interested in our history, language, and culture, that I have found inspiration in that alone. The potential for both peoples to come together and be successful is amazing, and needs to happen. Where and when will this film premiere and how will it be distributed?
The film is now set to premiere at the 2016 New York City Greek Film Festival at the Director’s Guild of America Theatre. Several screenings will be held through New York during the festival. From there, we are submitting our film to several other festivals across the US, Europe, Turkey, Asia, and of course, Australia.

Is Smyrna now your permanent home or are you harbouring a desire to return to the US?
My home is where my work is, and that is Izmir. I had made the most difficult decision when I left the States, but I’m proud and honoured to say that I’ve continued producing in Izmir/Smyrna, but have extended my profession in education, becoming the International Baccalaureate film instructor at the American College of Izmir. Teaching is my other passion, so I certainly feel I have the best of both worlds.

Would you transition from Turkey to Greece? What is your relationship with Greece?
I love Greece very much and visit as often as I can to see my family that I am very close with. My hope is to build a creative bridge between Izmir/Smyrna and Greece in order to produce more projects on an international level.

The USA, Turkey and Greece; which country would you say is closer to your heart?
All of them are dear to my heart for different reasons; I don’t say that in the nationalist sense, but from a personal relation I have developed with each one of them.

Living in Izmir/Smyrna for over six years now, I have found a lot of joy and comfort here and I have time after time been welcomed with open arms. The people of Izmir/Smyrna have made me feel at home, especially when I say I’m Greek.

‘Journey Through Smyrna’ will premiere at the 2016 New York City Greek Film Festival screening at the Director’s Guild of America on 2 October 2016. The second festival is the 2016 Edirne International Film Festival (Turkey) in mid-Oct (TBD), with a concert held by NeaBanda.