Memories of a Doll

Michail Charalampidis’ short film about a girl’s lost childhood in the early 1920s, co-produced by Stella Dimadis, is an official selection at LAGFF Screenwriter and director Michail Charalampidis is back in Greece after working on Game of Thrones for two years, and his newest work, short film Memories of a Doll, is co-produced by Medea Films and our own Stella Dimadis. The film is now an official selection for the Los Angeles Greek Film Festival and is screening in Hollywood on Saturday 10 June.

A group of Turks attacks the next morning. The hatch is closed and that’s the last time Myrto will see her mother alive. The intruders enter the house and murder the rest of the family.

Memories of a Doll is based on 1922 Anatolia and follows a young girl and her family hours before the horrific events leading up to the Asia Minor Catastrophe.

By following the girl’s predicament, the film aspires to explore violence, and shake the belief of what this experience truly means.

“To what extent do we, westerners, understand what it means to a child to listen to their family being executed behind a wall?” the director wonders.

“It certainly sounds tragic and unpleasant, worthy of our sadness, but for the child experiencing it, it is a terrifying landmark, a dark memory and a reminder that something so given, like family, can be so violently taken away in a matter of seconds.”

Greek Australian producer and creative Stella Dimadis has a thing for deeper meanings, exploring human nature and empathy. Her own maternal grandmother had suffered a similar fate, fleeing Asia Minor to ensure her family’s safety, therefore, Michail Charalampidis’ screenplay idea resonated perfectly with her. Stella took some time off her busy schedule to speak to Neos Kosmos about her experience working with a Greek-based team and her newest work, a feature film entitled Lifting Clouds which touches on the sensitive topic of euthanasia.

How did the collaboration with Michail Charalampidis come about?
Michail and I were introduced by a mutual friend of ours, who lives in New York and who works tirelessly in promoting Greek cinema. From the first Skype meeting with Michail it was evident that the script would suit my interests for it revolved around a female character, Myrto, who undergoes an incredible journey within the story, against the backdrop of the 1922 turmoil during the cultural exchange within Asia Minor. I am drawn to stories that have strong female leads, and so the collaboration felt natural for me.

Does this story speak to you personally in any way?
Indeed, my maternal grandmother was a refugee who had to give up her home and life in Asia Minor. Life was not easy for her family: the turmoil left scars that carried on for generations. In a lot of ways, however, the film is also a contemporary story too, reminding us of the world’s populations that are forced to leave and make new homes in foreign countries. It is disastrous, particularly amidst the unrest that they have and are experiencing. I feel for the children, and I wonder how their lives will continue and what scars they will carry – Myrto shows us a glimpse of this in Memories of a Doll – a window here in Australia we rarely see. 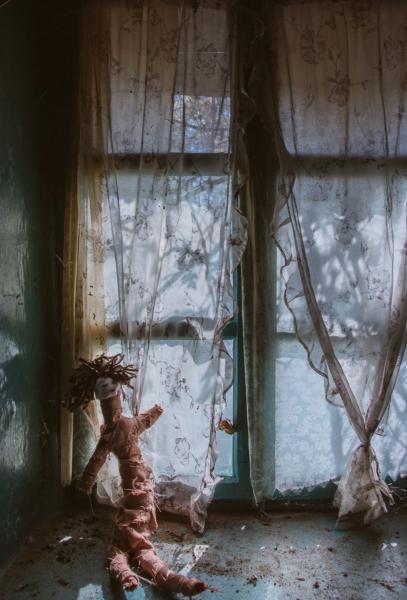 I heard there is going to be a feature film based on the Smyrni story by the same team. Is this going forward?
At the moment Michail is developing a screenplay about the Armenian and Greek genocides and how the American College of Anatolia helped many victims and orphans. It is still in its initial stages but support will be sought to make the film a reality in the near future.

How long did you work on the film’s production?
Michail and I began speaking between June and July last year and principal photography was in late October. All up, I worked on the film for about four months plus post-production which took another couple of months. Greece-based Avi Minou from Heart Attack Films was the principal Memories of Doll producer, and so she coordinated the logistics of production alongside Michail. I was in Greece during principal photography and it was a great experience for me to work alongside a Greek crew. This is something that I would like to do more of in the future. The set was very professional, filled with extraordinary enthusiasm.

What was the most challenging moment you experienced whilst working on Memories of a Doll?
The cast, crew, and organisation was exceptional. The greatest challenge for me was communicating in Greek within a business/work environment. Even though everyone’s English was perfect on set, it became a personal challenge of mine. It is on my to do list to cultivate my Greek speaking skills, particularly if I want to further explore film opportunities in Greece.

How do you feel that another film you’ve worked on is getting international recognition?
It makes me proud to have worked alongside teams of people that have devoted and dedicated their passion to the films that I have been involved in, equally more so to see that international audiences are continuing to enjoy these films. A lot of effort and time goes into making stories come to life on the big screen and getting the recognition has certainly encouraged me to continue doing this.

What’s next?
At the moment I’m focused on Lifting Clouds, a film that explores three generations of women, and how they each grapple with the grandmother’s terminal illness and consequent euthanasia. The film was completed in 2017; written, directed and produced by me. I wanted to see what the dialogue would be like, who would be more prone to accept the decision? Can a decision ever be reversed with persuasion? What are those arguments against? What are the arguments for? Can anyone put a stop to the decision? Finally, what happens to those left behind when the person has passed? I hope Lifting Clouds can take audiences on a personal journey on the philosophy behind euthanasia. ‘When the clouds won’t lift you, you have to force them yourself.’ What does this motto mean for you?
For the past few years I had been thinking about all the things definitive in life. But, no matter how hard I thought about it, there were no ‘definitives’ as such, except one ‘definite’, and that was, once we were born, we were all on the way to a death of some sort. It was such a grim thought, but, it was what got me thinking about the types of deaths that humans have and whether there could be some control with the way that humans die. After all, there is control in every other aspect of human life, so why the persistence in leaving human deaths to chance, particularly when they are imminent and obvious. Our pets’ deaths, when they are terminally ill, are not left to chance. Pets are surrounded by their family, swaddled in blankets and love for their final goodbye. Yet humans are never given this luxury.

Some countries in the world have legalised euthanasia, with various stipulations. Each country differs in the way, and in the how, euthanasia can be administered. Australia is close to drafting up a proposal to legalise euthanasia, and with this there will be lots of relief for many terminally ill people who wish to control the end of their lives. I, however, wanted to explore the concept of euthanasia within the family environment when a terminally ill family member wants to be euthanised. I wrote the script to incorporate three generations of women in one family grappling with this issue.

What made you choose country Victoria?
It was important to keep the cast and crew on a homestead in Warrnambool for the duration of the shoot so that the feelings and the thoughts were contained within this isolated space. Many times the cast would bring their own sentiments to the performance for the topic became personal to them, as this is the one definitive and common denominator – death, that all people have. I am very proud of the result, showing audiences in the short space of thirteen minutes various answers to questions pertaining to euthanasia that can crop up when faced with this issue in a family environment. I wanted all the cast to be women, as it is mainly women who care for those who are dying.

Watch the trailer for ‘Memories of a Doll’ here: https://www.youtube.com/watch?v=IJaJfLerLmo