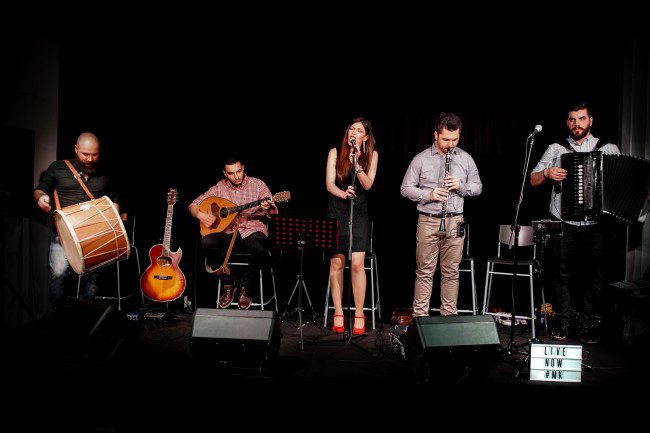 The Greek Centre was brought to life last week with the sounds of northern Greece thanks to a live performance by new and emerging folk band Mikri Kompania.

While traditional folk music is usually known to be enjoyed outdoors in open spaces, the Friday night performance provided a contrast, taking place in a warm and cosy, cabaret-style atmosphere, which seemed, if anything, to amplify the kefi.

The debut performance saw the group, featuring five new faces with different musical influences and origins, take the audience on a journey with a selection of songs and rhythms from Macedonia and Thrace.

Among those gathered on the night was director of Manasis School of Greek Dance and Culture Demosthenis Manasis, who couldn’t speak highly enough of the performance by the young team, describing it as “a breath of fresh air”.

“I have had the pleasure of playing with most of these musicians in the past, but their fusion of energy, passion and most of all interest and dedication to our traditions and customs is what encourages us all to support their efforts and aspirations for the future,” he told Neos Kosmos.

Despite being a sold-out event with a relatively small dance floor, attendees were eager to dance along, making use of every nook and cranny.

The group, which came together in 2015, includes Angelos Tzovaras on clarinet, Ilias Gilos on accordion, lute player and guitarist Dimitrios Gilos, Stephanos Eleutheriadis on percussion and vocalist Eleni Boukouvala.

To find out more about Mikri Kompania and to catch their next show, visit the group’s Facebook page: www.facebook.com/mikrikompania