Reflecting on 60 years since that first edition in 1957 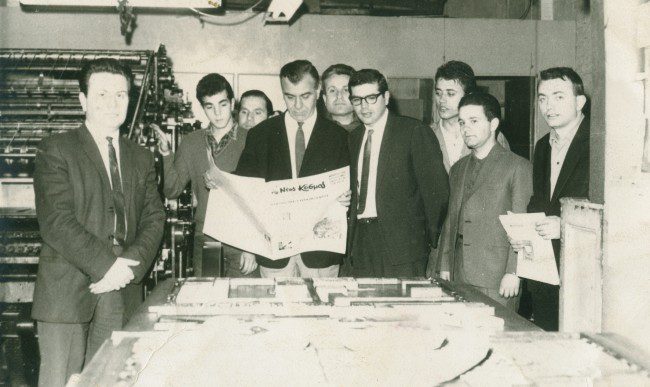 Neos Kosmos turns 60 today, Monday 13 February, and we are planning a special anniversary edition to be published later this year. But today we would like to reflect on those 60 years since that first edition in 1957.

Every newspaper in the world forms a special bond with its readership, and in the case of Neos Kosmos, this relationship was established and nurtured on the dreams and challenges of all those people who left Greece behind in pursuit of a better life here in Australia.

We have many reasons to be proud of our thrice-weekly, bilingual, unique paper; our circulation figures (as confirmed by the Australian Bureau of Circulations) far exceed those of any other Greek paper in Australia, making Neos Kosmos the most successful non-English Australian newspaper, as well as the most successful among the papers of the broader Greek diaspora. Neos Kosmos has changed significantly over the decades, both visually and in its content. Today, the paper is bilingual and not restricted to its three printed publications per week. It has a very strong, and growing online presence, reaching over 100,000 regular readers every month, as well as a robust social media following, connecting members of the community and the interconnected diaspora.

Neos Kosmos remains a newspaper that, since its inception, has played a role far beyond that of a news outlet, which in part explains its bond with its readership. In the 1960s the publication organised soup kitchens for unemployed Greek migrants. It advocated on issues of Greek national interests, which played a significant part in the pro-Hellenic stance of many Australian politicians and administrations. Neos Kosmos fought against the military junta in Greece and for the rights of workers and migrants. It campaigned for the establishment of a chair of Modern Greek Studies at Melbourne University, and tirelessly fought for the implementation of multiculturalism.

The Australian Labor Party endorsed many of the suggestions around multiculturalism put forward by Neos Kosmos, when Gough Whitlam rose to power in 1972, initiating policies later embraced by his Liberal successor Malcolm Fraser.

Among the causes Neos Kosmos successfully fought for was the abolishment of the restrictions in granting Australian citizenship to migrants involved in political activity, the laws allowing the transfer of overseas pension rights, the funding for migrant schools and the creation of SBS, which was built on the 3EA radio licence issued in the name of Dimitris Gogos, the founder of Neos Kosmos.

In years that followed the paper continued to support the cause of multiculturalism and was also instrumental in the creation of the Greek Australian Welfare Society (now Pronia), from which Fronditha evolved using the offices of Neos Kosmos as its fundraising headquarters. Even the inclusion of Greek among the languages taught in Victorian schools is largely due to thousands of our readers signing a petition on the issue.

A complete recount of the many campaigns and achievements of Neos Kosmos would take up a lot of newspaper pages. So would a recount of the life and times of Takis (Dimitris) Gogos, our founding editor and publisher (alongside his long-term partners Nondas Pezaros and Christos Mourikis), whose birthday is also on 13 February. The son of migrants from Asia Minor, Takis Gogos was born in Chios, where he first got involved in newspapers in an era of political turmoil before reluctantly deciding to migrate to Australia due to the harsh political climate that made it impossible for progressive and left-leaning citizens to lead a normal life in Greece.

In Australia, he took part in struggles against discrimination and oppression, pursuing his journalistic ambitions with the Greek Australian (Afstraloellinas) before founding Neos Kosmos.

His son Christopher is now at the helm of the newspaper, leaving his own mark while maintaining the core principles and journalistic ethics handed down by his father. It is under his leadership that Neos Kosmos made the transition to new technology, turning the paper’s online edition into one of the most popular news outlets of the Greek diaspora − and a point of reference for Greek media in the motherland.

A second generation Greek Australian, Chris Gogos has always believed in the role of the English edition of Neos Kosmos, which has become the cultural link between the older and younger generations in our community. Most importantly, it is now the defacto language in communicating the hopes and aspirations of a new generation of readers in print and online.

Neos Kosmos is now on the path to presenting and retaining our incredible cultural heritage to a much bigger community than the one that existed all those years ago in 1957.