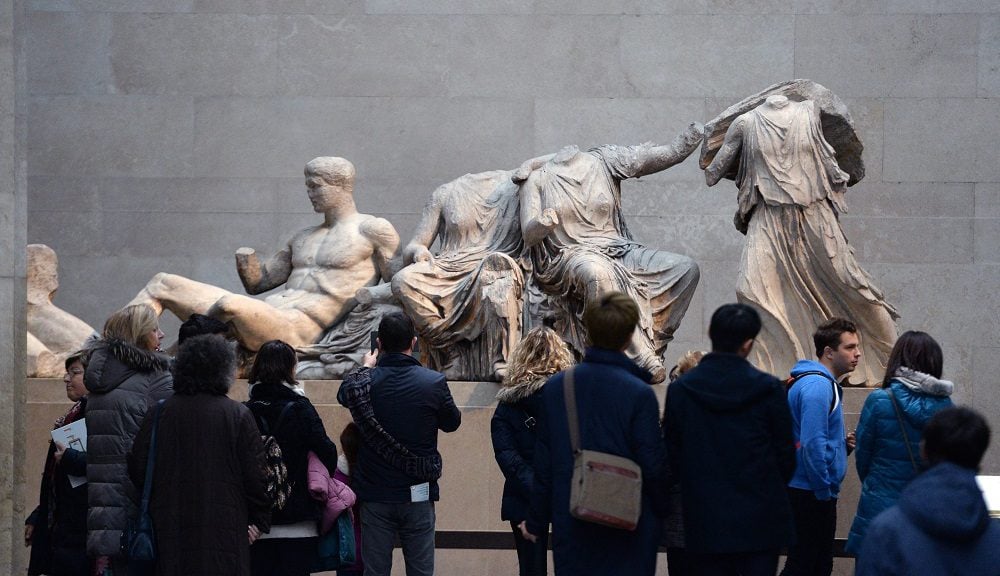 Visitors look at The Parthenon Marbles in the British Museum in London, Britain, 05 December 2014. Photo: AAP via EPA/Facundo Arrizabalaga

The request has been made as a symbolic act in the fight against anti-democratic forces that appear to be on the rise and seeking “the dissolution of Europe”.

“The reunification of the Parthenon Marbles will be a symbolic act that will highlight the fight against the forces that undermine the values and foundations of the European case against those seeking the dissolution of Europe,” said Lydia Koniordou, the Greek Minister of Culture and Sport.
“The Parthenon monument represents a symbol of Western civilisation. It is the emblem of democracy, dialogue and freedom of thought.”

Greece has a number of art works dating back to antiquity, including the ‘golden mask of Agamemnon’ and the statue of Zeus/Poseidon, which if loaned to Britain would likely draw great interest.

In an official statement the International Association for the Reunification of the Parthenon Sculptures (IARPS) said the Greek government had clearly made the offer in the “true spirit of compromise”.

“Greece and its supporters will not rest until all the known surviving sculptural elements from the Parthenon are reunited in the Acropolis Museum in full view of the monument which they once adorned,” the IARPS said.

Andrew George, chairman of the British Association for the Reunification of the Parthenon Sculptures, said agreeing to return the sculptures on these terms would only help the UK to rebuild its reputation in the region following the controversial Brexit vote.

“Britain has nothing to lose but a deeply damaged reputation – having clung on for over 200 years to such important artefacts which were stolen from the Greeks when they could do nothing to stop it – and has much to gain at the very time Britain’s reputation needs enhancing amongst those countries it wants to do a deal with,” Mr George said.

The Marbles were taken from Greece more than 200 years ago by Lord Elgin, when the country was still part of the Ottoman Empire, where they once adorned the Parthenon temple built by the world’s first democracy some 2,500 years ago.