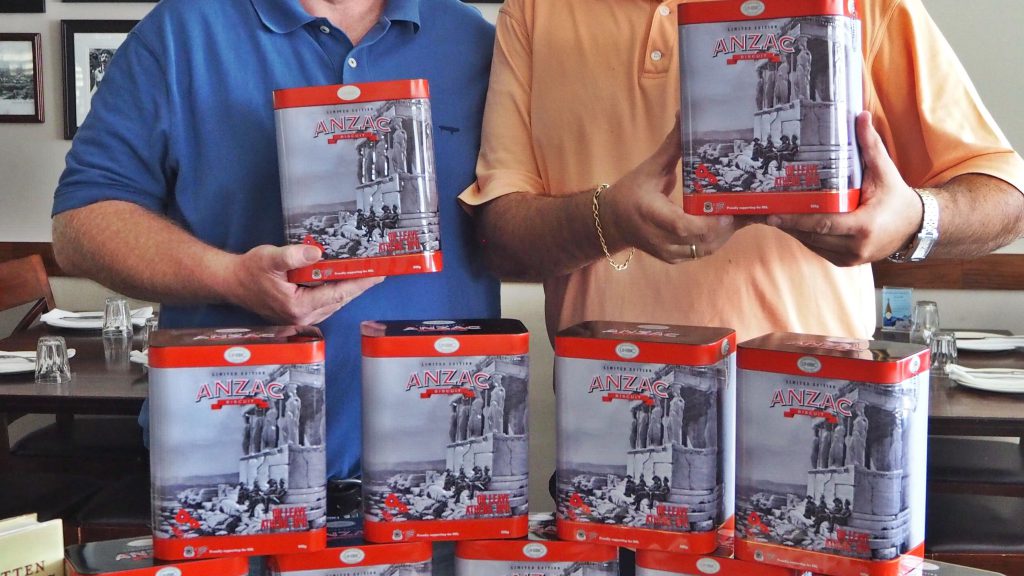 (L-R) Jim Claven and Tony Tsourdalakis from the Battle of Crete and the Greek Campaign Commemorative Council celebrate the release of the new Anzacs in the Greece commemorative Anzac biscuit tin. Photo: Christina Despoteris

An iconic image of Australian soldiers on the Acropolis in early 1941 will feature on the Unibic commemorative Anzac biscuit tin. The tins – which contain Anzac biscuits – are produced by Unibic with proceeds going to the RSL to support its work assisting veterans and their families.

Each edition of the tin is adorned with a historic image from Australia’s Anzac legend. This is the first time that an image from the Greece and Crete campaigns has featured on the tins. The initiative is the result of a proposal from Mr Tony Tsourdalakis on behalf of the Battle of Crete and the Greek Campaign Commemorative Council.

Mr Tsourdalakis, who is secretary of the council, said that it was a great honour to have Greece and its connection to Anzac chosen to feature on this year’s commemorative tin.

“This recognition will bring the Anzac connection to Greece into tens of thousands of homes across Australia. This is a great initiative for all of us interested in raising awareness of the Anzacs in Greece in 1941 and more generally for the whole of the Hellenic community in Australia,” Mr Tsourdalakis said.

Council member, historian and philhellene Mr Jim Claven pointed out that the photograph is one of the most iconic images of the Australian involvement in the Greek campaign held in the Australian War Memorial in Canberra.

“The image of the diggers on the Acropolis, resting beneath the famous Caryatids of the Erechtheion, symbolises the experience of Greece and its culture for the thousands of Australian soldiers and nurses during the campaign in Greece and Crete. Soon those relaxed diggers sitting on the Acropolis would move north to join with Greek and other Allied troops to face the looming German invasion of Greece,” Mr Claven said

Mr Tsourdalakis urged members of the community to purchase their own commemorative Anzac biscuit tin to support the RSL’s work and to have a beautiful memento of the year when Anzacs came to Greece in WWII. He also stated that the council’s program of events commemorating the Greek and Crete campaigns would be announced in coming weeks.

“Following on from our successful program last year, the council is organising a series of public lectures and events to promote awareness of the campaigns. We will also be participating in Melbourne’s Anzac Day parade with some of the Australian units that fought in Greece and Crete in 1941 at the request of veterans and their families,” Tony added.

The tins can currently be purchased at major IGA supermarkets and will be available from other outlets in the future.