Varoufakis vs the system 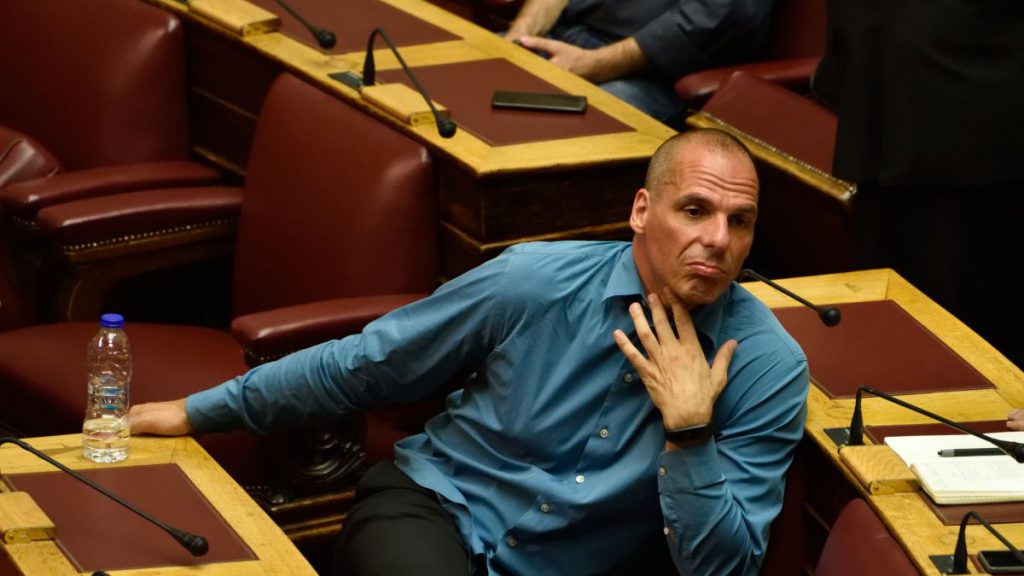 Most of Greek people fail to understand the international star appeal of Yanis Varoufakis. For them, he’s still the Finance Minister that led the country down a cliff, the man who is to blame for capital controls, whose ‘creative ambiguity’ cost Greece billions, the man who was in charge of the failed negotiations between the Greek government and the ‘institutions’ (after all, he was the one to “kill the Troika”, as Jeroen Dijsselbloem has infamously put it). And yet, a small number of Greeks still admire him for his courage and bravery; a small percentage of Greeks – much smaller than the 62 per cent who voted ‘No’ to austerity in the referendum that was the turning point for Greek politics and particularly for Syriza as a governing part – still see him as a man of integrity, who preferred to step down as Finance Minister to conceding to the creditors’ demands, betraying the mandate of the Greek people and performing the about-face that Alexis Tripras did, implementing the harsh austerity measures that have crippled Greece.

For this small percentage of people, Varoufakis is a hero. For his many enemies, he is an arrogant, self-important narcissist who used the country’s plight to build his own profile and monetise it in academic circles. His opponents even try to downplay his academic status; they dismiss his work, his career, his network, his influence. What his opponents have failed so far to point out, is his true weakness. Focusing on his looks, his clothes, his style, they don’t see that if Varoufakis was a failed Finance Minister – and he was just that – it was not because of his game theory tactic. It was because he failed to do the job of a Finance Minister – present a state budget, offer an idea of fiscal solutions. He was not a Finance Minister; he was appointed to play a game of chicken, and he did just that.

And yet, despite his failure as minister, outside of Greece, Varoufakis enjoys a rock-star-status unfathomable by both his enemies and his admirers. People flock to see him talk at conventions, writers festivals, political rallies. His appearances at Sydney’s Festival of Dangerous Ideas and the Melbourne Writers Festival were sold out. And his books are best-sellers. The same can be expected from his latest outing, Adults in the Room: My Battle with Europe’s Deep Establishment, which journalist Paul Mason deemed “one of the greatest political memoirs ever”, in a Guardian review.

The timing could not be better. Not only is Europe in turmoil, with the UK bracing up for elections to decide how to deal with Brexit, and France becoming a test tube for the future of EU, but the northern hemisphere is preparing for summer and nothing could be better-paired with beach towels than Varoufakis’ breathtaking prose. The book’s title is a nod to Christine Lagarde’s quip at a 2015 press conference: “For the moment we are short of a dialogue, the key emergency is to restore the dialogue with adults in the room”.

The thinly veiled remark was addressed to the Greek side, notably Varoufakis and Alexis Tsipras. In the book, Tsipras is presented as a weakened, exhausted man, under the influence of a team of pro-reform, pro-EU advisors, whose previous experience had been on the socialist governments of the past. A man who was slowly becoming susceptible to power and unwilling to go all the way with the game of chicken Greece had been playing with its creditors. Varoufakis, for his part, whose claim to fame as an academic was in the application of game theory to economics, had planned out Greece’s confrontation strategy, which relied on the Greek side playing it as though it was not afraid to default or exit the eurozone, in order to call out the EU’s bluff. Tsipras was afraid and chose to compromise. Which left Varoufakis with another role, that of the hero. He’s happy to play that role, in his public appearances and in his books. Especially in his books, where he has a dual role: being the writer and the main character, the unbreakable hero with a vision to save, not only Greece, but Europe, in a small time-frame. The EU is eroding, money is running out and Varoufakis is touring the continent, engaging in heated arguments, a real-life Jason Bourne/ Robert Langdon character, single-handedly fighting the European establishment and austerity dogma with bare fists. In one of the passages printed in Greek before publication, he describes his meeting with his arch-nemesis, German Finance Minister Wolfgang Schäuble.

The passage reads like a scene from Casino Royale, in which James Bond first confronts Le Chiffre on the baccarat table. The German Finance Minister is presented as a Machiavellian persona, who expresses admiration for the worthy opponent presented to him in the form of Varoufakis – the only one in the European capital who could see that the eurozone is not viable as it is – and who is ready to offer a deal to the Greeks, should they opt to drop the Euro, even ‘temporarily’. According to the story, Schäuble was very happy with the referendum idea, hoping that it would lead to ‘Grexit’; he said that he would back Greece, while it would try to find a pace and restart, with a new currency, which the Government would devaluate. The Greek team was supposedly listening in horror.

Super-minister Varoufakis, for his part, didn’t flinch. Instead, he used the occasion to launch a speech on the ideal of creating a better Europe. It is the same that the real-life version of Varoufakis promises to do through his new political platform, Democracy in Europe Movement 2025 (DiEM25). Aiming to stop the EU’s “imminent disintegration”, Varoufakis calls for the people to back him in his quest to “democratise it before it is too late.” Followed by young activists, and the “usual suspects” – Noam Chomsky, Slavoj Žižek, James K Galbraith – but also some unusual ones, most notably musical genius Brian Eno, he’s once again taking advantage of perfect timing – the French elections to deliver his message against oligarchy and the corrupt banking system, calling for democracy.

His main argument is that, as far as Greece is concerned, political choices were presented as economic necessities and vice-versa. The Schäuble episode confirms it – and there has been no refutation so far. It’s unclear as yet, whether DiEM25 will become a pan-European party asking for people’s votes in the next elections for Europarliament. Even if it does, it is too soon to say whether it has any chance. In the meantime, Varoufakis is creating an alternative narrative to the ‘official’ one. He may succeed. Not only because his prose makes for a fascinating read, perfect for the European summer.