Vy Ivanidis with one of her creations for her son’s birthday. Photos: Supplied

Think of a cake, any cake – the most challenging in fact – and Vy Ivanidis (née Tran) will come through with the goods.

She’s the talent behind Melbourne-based The Cake Reaction, which she has been running part-time between her day job in the health sector and her family. It all started with what she considers to be a failed attempt at a Thomas the Tank Engine-inspired cake for her son’s second birthday.

“I started making them like most mums get into this, with my children’s birthday parties. So it’s probably been close to eight years and my very first cakes did not look like they do now,” Vy tells Neos Kosmos with a laugh.

“He actually said it looked like a bad Thomas – I took that to heart and it was sort of the reason why I kept trying to get better at what I was doing.” 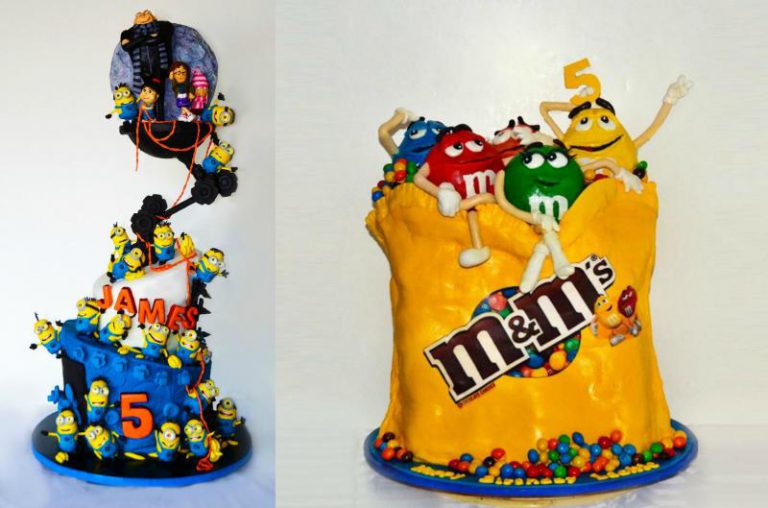 With a long-held passion for the arts, namely painting and sculpture, it was an interest she didn’t think she would ever be able to pursue as a stable career and so later in motherhood she welcomed the opportunity to do so through the medium of cake.

“I had a lot of people ask me to do their cakes; it was an overwhelming response, particularly with Facebook when you post pictures. A lot of people didn’t actually realise they were cakes, and then the word got out and I was heavily encouraged by a lot of people to do something with it and wanting to pay me for it.”

But things really took off for Vy in 2012 when she made a cake for Telstra in celebration of the launch of an internal campaign, and ever since she says the business has grown very quickly.

Aside from birthdays, baptisms, and weddings, she has also been commissioned to do a number of interesting cakes; bringing characters to life for book launches, and a lion statue for a Melbourne-based school’s 150th ball.

“I had to make a massive lion, which weighed over 40 kilograms and it was golden. Not only was it quite big in size, it tested my abilities in terms of logistics, and it was just very laborious, and such a big thing having it stand up on all fours. It’s those jobs that really stretch me and push me to new heights with techniques and what I can achieve with cake,” she says.

But one of her biggest highlights to date, which helped her to truly realise her potential, was winning first prize in the Novelty Cake Category at the Royal Melbourne Show with an impressive 3D Dr Seuss cake.

“That was probably the highlight, being recognised amongst a group of very talented cake makers,” Vy recalls.

“Everybody knows Dr Seuss and everybody can identify with the books that I had highlighted. I wanted to do something that was so familiar to everybody but put my spin on it and the way it’s been done it looks like it defies gravity. That was the inspiration behind it.”

That and her two boys, aged six and eight years, who she says are always very invested in all that she does, especially when it comes to design. 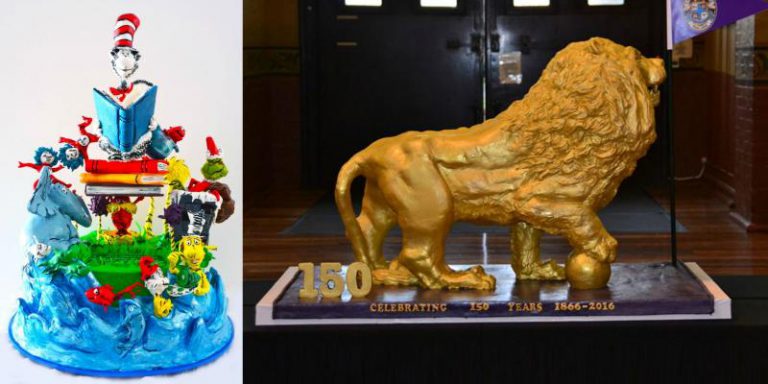 While the cakes are visually very impressive, they become awe-inspiring when noting that as a cake maker Vy is largely self-taught.

Aside from a few courses she has completed online, she says she has crafted her own way of doing things through trial and error.

While Vy says it’s hard to say how many hours she spends on each creation, there are some that she works on for about a month studying and sculpting a character to get it just right.

“The figurines need to be sculpted well in advance to rest and dry and resculpt perfect and that process can take weeks. For example the Dr Seuss cake, that took a good 3-4 weeks. The lion cake, which is all one component and all cake, comes together literally in about 10 days,” but adds that she works with the same principle as any cake maker, the cake itself made fresh, with the whole thing coming together 48 hours before delivery.

“And that 48 hours is no sleep, no eat, no nothing, it’s just baking and working on it,” she laughs.

Offered in the usual favourite flavours including chocolate, vanilla, Cherry Ripe and jaffa, amongst others, each has been tested and tweaked to ensure the customer’s vision can be brought to fruition and stay that way for a duration of time, which Vy has come to realise is a process that has very little to do with baking, and more to do with engineering.

“You’re dealing with something that needs to be foodsafe and edible, but also has to defy gravity and so you have to approach it like an engineer or an architect would think about a house. So there’s the internal structure, there’s the filling, and then there’s the cosmetics of it. And it’s very technical actually; the actual artistic part is what happens after you’ve put together the structure and making it look like whatever the client wants it to look like,” she says.

That’s not to say that she skimps on taste however, and has been told by client’s time again that her cakes are “nice and moist and really moreish”.

“People often think these cakes are good to look at but not really nice to eat and for me that aspect is just as important,” she muses. Now the cake maker is set on expanding her business to meet demand and is looking to take her creations to the next level – which yes, apparently is possible – with the inclusion of electrical elements such as flashing lights, smoke and sound effects, which she hopes will further impress the kids, her continual motivators.

“I think with any child, and my children particularly, they never remember their presents but every child remembers their cake,” she says.

“I never for once thought I’d have this sort of demand and appreciation for my work. It’s so heart-warming when you hear them shriek with delight when you put the cake down on the table, and that’s why I do it, I love that. And that’s also the name of my business The Cake Reaction because it has to be that reaction that I’m going for.”